I know a plating faux paus when I see one (I’ve watched "Top Chef" and "Chopped" religiously), and I was appalled. 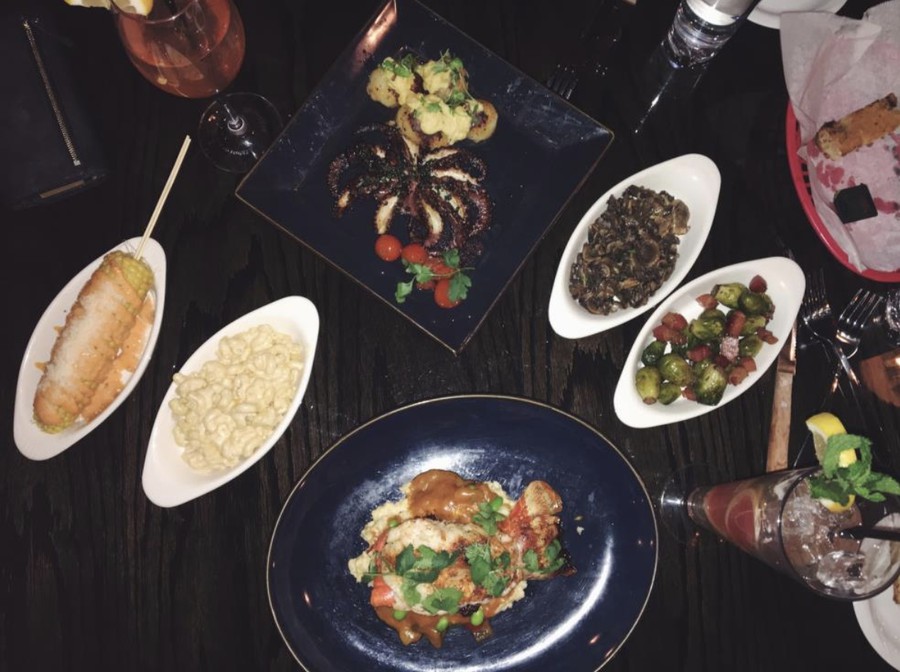 Porkchop owner Jovanis Bourgoub opened Red Fish, Bleu Fish at 5121 South Harper Avenue in Hyde Park in mid-January 2019. Located in the City Hyde Park complex, the restaurant and speakeasy next door features seafood dishes and drinks inspired by New Orleans cuisine and the Hyde Park community. Before I begin my review, I have two things to say: Plastic cups are tacky and shells are not food.

My friend and I were seated quickly for a quiet evening service on Friday. The dining room has ample seating and a private dining room with large televisions and loud music. The decor is “busy”—with sports playing on the television and throwback music in the background, I completely lost the theme of the restaurant and could barely hear my friend across the table.

The menu primarily features seafood, as the name implies, as well as a steak and a chicken option. For vegan and vegetarian options, there are entrées such as the Wild Mushroom Pea Risotto and Baby Romaine Salad. Top selections also include the Paella Ala Red Fish Bleu Fish and the Whole Fried Caribbean Red Snapper. We were optimistic about the Baked Maine Lobster Tail and Grilled Spanish Pulpo with four sides: Fines Herbs Sautéed Mushrooms, Brussel Sprouts Pancetta, Truffle Mac and Cheese, and Elotes. In retrospect, we should have ordered the safer options—calamari and salmon. Those can do no harm, right?

The drink menu features margaritas, classics, and newly inspired drinks such as the 51st Street and the Chocolate Box. We decided to order the New Money Spritz and the 51st Street cocktail. While we enjoyed our drinks, they came in tall plastic cocktail glasses that made it hard to drink. These tall plastic cups brought me back to middle school, drinking Capri Sun with a really long straw. Not a good look.

Now comes the food. Complimentary breadsticks on the table is a cute gesture, but the bread was toasted rock-hard and oily. Mary Berry would not be a fan of these salty croutons.

Next, we’ll talk about the sides. Thank you, Brussels sprouts and pancetta, for being the only star of this dinner menu. The sautéed mushrooms were slightly too acidic, the truffle mac and cheese had no taste of truffle, and the elotes tasted like wet, sweet corn mayo. Apart from the Brussels sprouts, I would not order any of these side dishes again.

The tab was $90 for the two of us and, I have to say, we felt swindled and disappointed by Red Fish Bleu Fish. From the confusing decor to the regrettable entrées and sides, any college student craving seafood in Hyde Park should skip Red Fish Bleu Fish and hit any restaurant in River North instead. Or, hell, get a filet of fish from Whole Foods and let Michelin-star chef Éric Ripert teach you how to cook on YouTube. If you’re looking for a local watering hole in Hyde Park, skip this place and head to Jimmy’s. To close out, I’d like to keep the image of burnt-tasting octopus and lobster shells out of sight, and the memory of trying one of Hyde Park’s newest restaurants out of mind. Just like Dr. Seuss’s One Fish, Two Fish, Red Fish, Blue Fish, Bourgoub’s establishment is freewheeling.

From Austin to Red Fish Bleu Fish, please pack your knives and go.