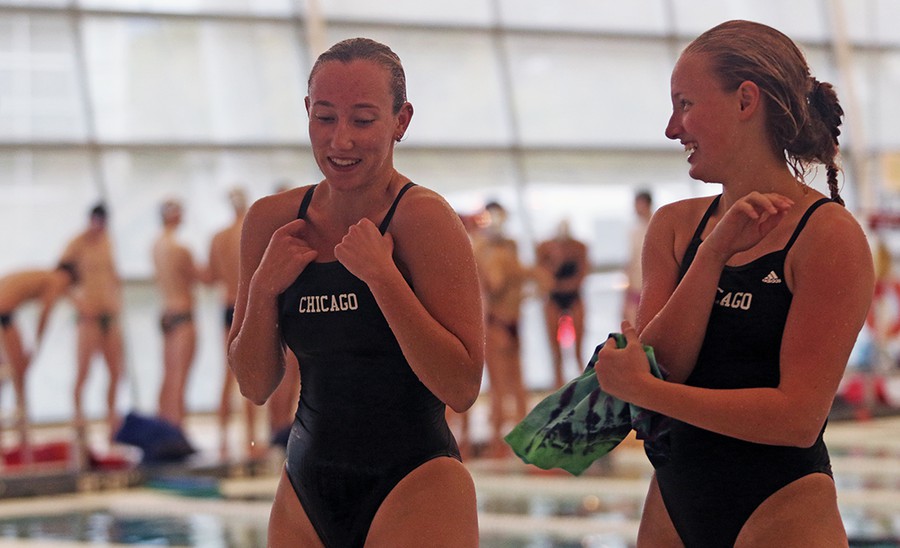 First-years Elizabeth Cron and Alice Saparov laugh during a break.

Often collegiate athleticism derives from a desire to excel. However, Elizabeth Cron, a first-year on UChicago’s swimming and diving teams, embodies the idea that a love for the sport can make anything possible. In the past week, Cron was named the UAA Athlete of the Week for her incredible performances at the Triangular meet. Cron set UChicago’s school record in the women’s three-meter dive (308.32) as well as placing first on the one-meter board. She gained NCAA qualifying scores in both of her dives. This incredible display comes after months of dedicated work in and out of practice. In combination, Cron cites that her love and passion for the atmosphere of UChicago’s swimming and diving teams is the source of her success. Cron explains, “The point of Division III sports is to do because you love it.”

Cron has been swimming for her entire life. In her childhood, she did both swimming and gymnastics at the club level which prompted her to try diving. Cron shares, “At first I thought I was going to hate it but now we’re here ten years later and I can’t imagine life without diving. There’s nothing that will be closer to the feeling of flying than diving. You’re throwing yourself off a piece of metal into the water. It’s an adrenaline rush.”

While there are only five divers on the team, they create a family unit within the larger swimming and diving team. Cron has a source of camaraderie in her fellow first-year diver Alice Saparov. She explains that as the only divers on the team that are in the same academic year, she and Alice understand each other and offer a companionship through the adjustment to competing and practicing at the Division III level. She finds mentorship through upperclassmen like fourth-year Anna Girlich and third-year Agnes Lo. “I aspire to be like them. They are all such a blessing in and outside of practice.”

Cron’s diving teammates appreciate and admire her commitment to the team and sport. Saparov explains, “I really enjoy diving with Elizabeth! She works really hard at practice, which motivates me to keep pushing myself as well. And whenever any of us are learning new dives, Elizabeth will always cheer us on.”

Cron cites her passion for the sport and the nurturing environment of UChicago’s swim and dive team as the basis of her success. At most universities, swim and dive teams operate separately in and out of practice. However, Head Coach Jason Weber and Diving Coach Becky Benson strived to create an inclusive environment for both swimmers and divers. The teams practice together, coming in, leaving and eating a family-style dinner at the same time. Cron says, “A lot of my friends from home do not have this. Traditionally, swimmers and divers exist on separate spheres on opposite sides of the pool. Before coming to UChicago, I had never heard a coach say swimming and diving every time he talks to the team. I want to thank Jason for aggressively including the divers. It makes this environment feel like a swimming and diving team. I know it means the world to me and my teammates and Becky.”

Reflecting on the adjustment to the collegiate environment, Cron believes that the inclusive atmosphere has helped her tremendously. Swimmers and divers alike cheer each other on during races and dives. The coaches act as guiding forces, encouraging the swimmers and divers through practices, meets and all aspects of college life.  She elaborates, “I don’t think I would have made it through my first quarter without the team. We zombie walk to 6 a.m. practices. Their support means the world to me. I wouldn’t have wanted college to be any other way.”

Cron has high hopes for this season. She aims to perfect a pike with two flips in all directions by the end of the season. Through rigorous training and the support of her teammates and coaches, Cron believes that this feat is possible. “Becky has helped me change my technique for the better. This sets the foundation for me to learn new things and do them well.”

Cron competes and practices with passion. Ultimately, success can derive from happiness. With exuberance and zeal for diving, Elizabeth Cron embodies this notion.