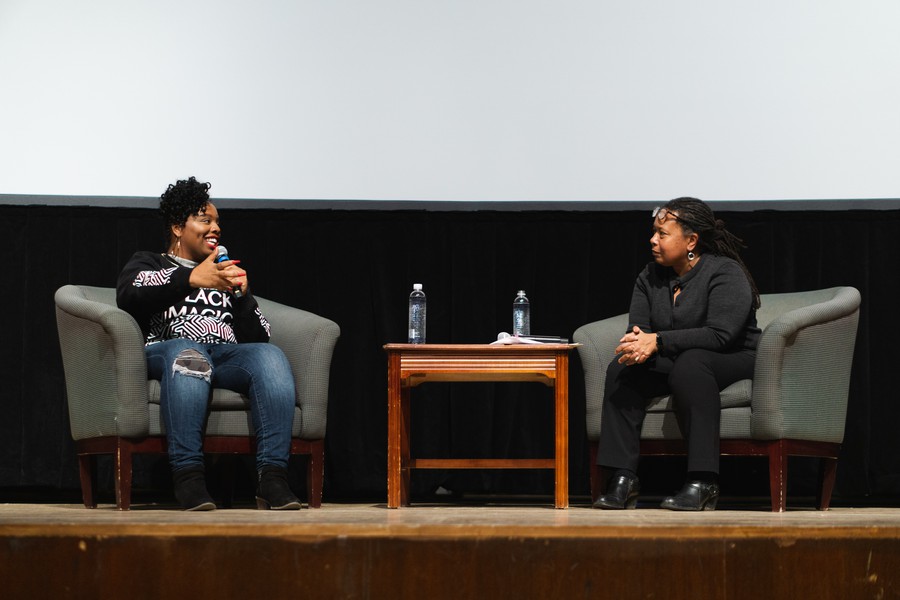 The discussion focused on Cullors’s development as an activist, her role in Black Lives Matter, and her current work fighting mass incarceration in Los Angeles.

Cullors, a community organizer, is best known as one of the three co-founders of the BLM movement, alongside Alicia Garza and Opal Tometi. She also has deep roots in community organizing in Los Angeles and works with organizations like MomsRising and JusticeLA to address issues such as maternal mortality and mass incarceration. Cullors recently published a book, When They Call You a Terrorist: A Black Lives Matter Memoir.

OBS referenced Cullors’s multifaceted perspective as a key factor in their decision, in a statement to The Maroon.

“Patrisse Cullors occupies a special place in [the BLM] movement as not only a co-founder but also as a queer Black woman. This allows her to offer valuable insights and provide an intersectional framework of discourse that hasn’t been seen in this way before. We fell in love with how Patrisse speaks after listening to several of her talks and interviews. It’s almost as if she’s painting a picture with her words, and we wanted to share that with everyone.”

Cullors opened by discussing her work within the past month fighting a $3.5 billion jail construction project in Los Angeles County. The County Board of Supervisors struck down the project after 15 years of activist work. Addressing the students in the audience, she emphasized the importance of joining or building an organizational infrastructure. Cullors told audience members that her intention in speaking was to engage more young people in the movement.

“I’m not that interested in having you all see me as entertainment,” Cullors said. “My interest and my sole goal is to organize you.”

Discussing the genesis of BLM, Cullors relayed an anecdote of a rally held in the predominantly white Beverly Hills neighborhood soon after George Zimmerman was acquitted of Trayvon Martin’s death, at which helicopter police appeared. Cullors recounted seeing the helicopters and addressing the white passersby.

“I say to them ‘Look at this, you see this helicopter? This is what we live with every single day,’” Cullors said. “Imagine what that does to your psyche, your spirit, your DNA. It was one of the first moments I could articulate the impact of mass persecution on me.”

The conversation with Cohen also touched on the importance of Cullors’s insistence that Black Lives Matter focuses on Black lives specifically, and the significance of the movement being founded by three women, two of whom identify as queer.

“I remember when people would learn, ‘Oh you’re one of the co-founders? I thought it was a man who did that,’” Cullors said. “As if women don’t create things all the time. As if women aren’t the social architects of whole movements. I think what I started to learn as we became more visible and people started to identify us more was that Black women have actually always been at the helm of social movements…. Our role is a breakaway from patriarchy and is a breakaway from what has historically been seen as ‘Black men fight for civil rights and us women wait for them.’”

Prompted by Cohen, Cullors spoke to the current political moment, saying that the White House administration represented a “dying” white regime and pointing out the position its consistent opposition to BLM places activists in.

“We have an interesting opportunity where we don’t have to be moderate,” Cullors said. “We get to actually call for everything we want and I think it’s best that we do that…. In these moments where it’s this polarized we actually have an opportunity.”