Dean’s Men Deliver an Intriguing Take on the Scottish Play 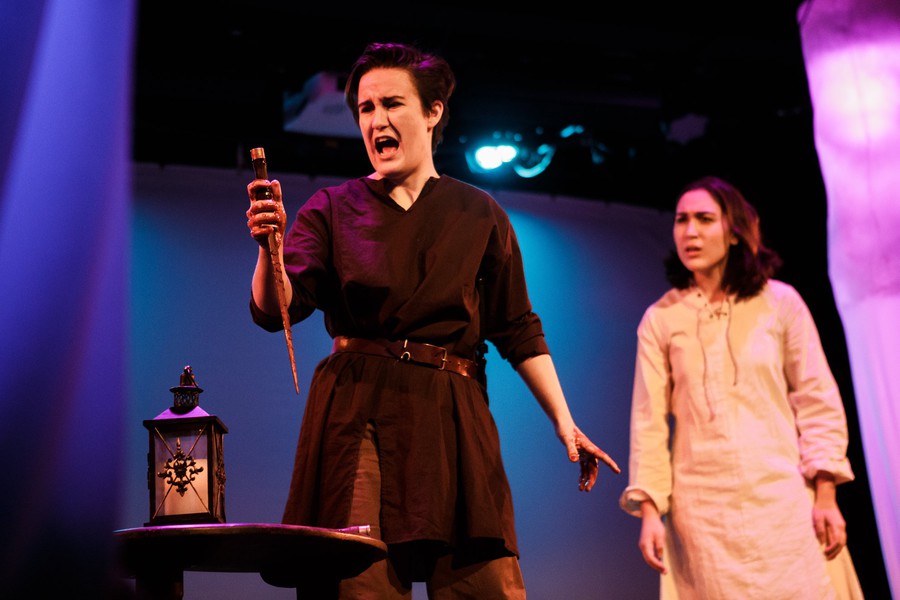 The Dean's Men production is anchored by stellar performances by Sadie Seddon-Stettler as Macbeth (left) and Isabella Hurtado as Lady Macbeth (right).

(Of course, I refer to the name of the title character. I don’t plan on referring to the show the Dean’s Men put up as anything other than the Scottish Play for the sake of theatrical tradition and superstition.)

Shakespeare’s Scottish Play is perhaps one of his most well-known tragedies, the classic tale of Scottish general Macbeth and his wife Lady Macbeth’s schemes to become the rulers of Scotland. It is a tale of murder and conspiracy in which friends, foes, wives, and children are murdered if they stand in Macbeth’s way, yet the guilt of their schemes comes back to haunt them. The play is shrouded in superstition—few theater people dare say its title within the confines of a theatrical space, and legends whisper of the production’s curse, damned by the coven from which Shakespeare stole the infamous “Double, double toil and trouble” chant.

The Dean’s Men’s production of the Scottish Play, charmingly directed by Sam Sobel, suffered some of the weaknesses common to performing Shakespeare’s original texts in contemporary settings. With no disrespect to the actors’ abilities, it can be difficult to understand Shakespearean English, and their delivery was at times muddled, producing more of a vague idea of what their words meant. Other deliveries were great, with the deadpan tones of certain lines garnering laughs. During last quarter’s production of Measure for Measure audience members were given a summary of the show as a helpful supplement to the occasionally difficult-to-understand text; I think most people are familiar enough with the Scottish Play that such a resource wasn’t necessary, but there were points in the night where I felt I could use some help.

That being said, at most points the actors’ performances truly dazzled. Highlights included Isabella Hurtado’s chilling Lady Macbeth, with her performance of the “Out, damned spot” monologue fully catching the attention of the entire room. Katie Bevil’s performance as the unfortunate Banquo offered a nicely clear understanding of Banquo as a character; the heel-turn later in the show as the Doctor amused the audience immensely. Among the minor characters, praise must be given to Cole Meldorf for his Donalbain, Fleance, Son, and Young Siward, roles which are all heavy on the death and dying front. It was an interesting choice to split the Porter into two characters, played by Claire Schultz and Ege Atila, who garnered some well-deserved laughs in the famous “Knock knock” scene.

Where this production flourished was in its design. Costumes by Mireille Farjo ably set the characters apart, which was especially helpful as several of the actors played multiple roles. In terms of lighting and sound design, in the first act of the show it felt as though sound and lights were not being utilized to their full capabilities. In certain scenes, like Macbeth’s phantom dagger or his initial encounter with the Witches, those tools were not amplifying the actors’ performances as strongly as they could. But things really ramped up in Act II with Macbeth’s second encounter with the witches. This was hands-down the best scene of this production, in part thanks to the excellent performances by the witches (Schultz, Atila, and Belen Edwards), Sadie Seddon-Stettler’s horror-struck performance as Macbeth, and Bevil’s two-part contribution—both as a voiceover for the Apparitions and in a physical performance as Banquo’s specter. Lights by Casey McKenna and sound by Luke Giacalone created the haunting atmosphere the scene needed, with the addition of incredible projections by Ezra Feldman that augmented the supernatural power of this sequence. This was, in all seriousness, the best version of this sequence I’ve ever seen, executed in a spectacular way I have never witnessed prior to this rendition of the Scottish Play—hats off to Sam Sobel. Additional praise has to be given to Jamie Macpherson’s fight choreography, which had me gasping during the final duel between Macbeth and Macduff (Jonathan Rufino).

Overall, I thought this production was a little rough around the edges in terms of line delivery and full utilization of the staging and technical elements. But as I’ve come to expect from the Dean’s Men, they put on a truly unique spin of Shakespeare’s texts that set it apart from other previous productions. This was, in the end, a well-done production of the Scottish Play, one that I will not easily forget.

And hopefully, the Dean’s Men aren’t forever cursed from putting on this play.

(If so, it was nice knowing all of you.)