After the lead actor of Fox’s Rent Live broke his foot, Fox chose instead to broadcast a pre-taped dress rehearsal, with disappointing results. 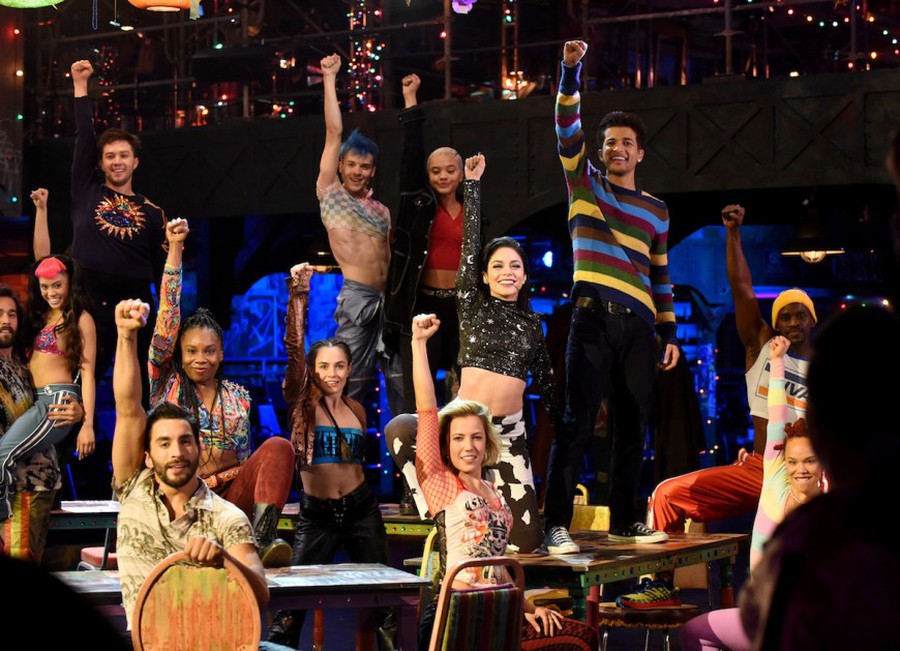 Christmas, 1991. Two young artists sit in their freezing New York City apartment, one wielding a video camera, the other strumming a guitar. Their landlord demands they pay rent, but they refuse to pay. The curtain falls, revealing a stunning warehouse set, and the crowd goes wild. This is the opening to Fox’s Rent Live, a nationally televised production of Jonathan Larson’s hit 1996 musical. Rent sets Puccini’s La Boheme during the AIDS crisis. Unfortunately, unlike his source material, which just finished a “firecracker” run at the Lyric Opera, Rent Live never stood a chance.

The production was the result of a series of strange decisions mixed with a bizarre misunderstanding of live theatre. At the end of a dress rehearsal on the night before the broadcast, lead actor Brennin Hunt broke his foot. Fox had no understudy, and rather than delay the production or air the actual live show, they instead opted to broadcast the pre-taped dress rehearsal. So Rent Live became Rent Live-ish. Although the dress rehearsal was performed in front of a live audience, it was still for all intents a warm-up, with much of the cast saving their best efforts for what they had expected to be the big night. It wasn’t unfinished, but it was still a rough draft, never meant to be shown.

The logic of this choice may have been sound enough, but the joy of theatre is in its sheer unpredictability, in the risk of a one-off performance, of every possible tiny detail lining up or falling apart. If it all works, it is magic. If it falls apart, well, the show must go on. (That’s also what understudies are for.) Rent in particular encapsulates this ideal: On January 25, 1996, the day before the show’s Off-Broadway preview, creator Jonathan Larson died unexpectedly. Still, despite the tragedy, the cast enthusiastically performed the very next night. Instead of embracing this resilient spirit of the show, however, Fox seemed to fight against it by refusing to adapt to the unfavorable circumstances that preceded the broadcast.

Perhaps the most disappointing part of Fox’s decision was that, fundamentally, Rent Live could have been terrific. It had the necessary foundation for a good show: a talented and experienced cast with backgrounds in TV, Broadway, and pop; a stunning and immersive set, and the show’s original Broadway director. When Rent Live does work, it soars. Vanessa Hudgens as Maureen is a standout, entering on a motorcycle and literally flying above the audience. Kiersey Clemons’s Joanne and Jordan Fisher’s Mark served as perfect foils; their energy visibly boosted in each other's presence. Their performance of “The Tango Maureen” hummed with the potential of what could have been. As Collins, Brandon Victor Dixon did most of the show’s emotional heavy lifting with heart-breaking skill. ‘Take Me or Leave Me” and “What You Own” were great fun, while usual standout “La Vie Boheme” rung hollow.

But it is hard to judge the performances knowing that the cast was intentionally holding back. If Tinashe’s Mimi was a little flat in the dress-rehearsal, who knows what she could have done in the originally planned production? Were the dizzying camerawork and terrible sound-mixing just growing pains that could have been solved, or were they intrinsic design flaws? And would the overzealous audience, cheering at every belted high note (of which there are many) have been more mindful of the performers, or at least been quieted by staff?

About fifteen minutes from its conclusion, Rent Live finally lived up to its name. The broadcast turned to what had actually been happening onstage the entire time, and it was delightful. Brennin Hunt, sporting a fresh cast, sat on a table to perform his final scenes--pretty standard staging for the show--and the original Broadway cast of Rent joined a reprise of “Seasons of Love,” uniting two generations of actors side by side. It was as if a curtain had lifted, and we could finally see what Rent Live had wanted to be the entire time. The cast, as expected, was phenomenally talented; it was emotional and electric and heart-wrenching. With a little better planning, this is what millions of people could have had: a compassionate, if flawed love letter to the uncontrollable joys of live theatre.