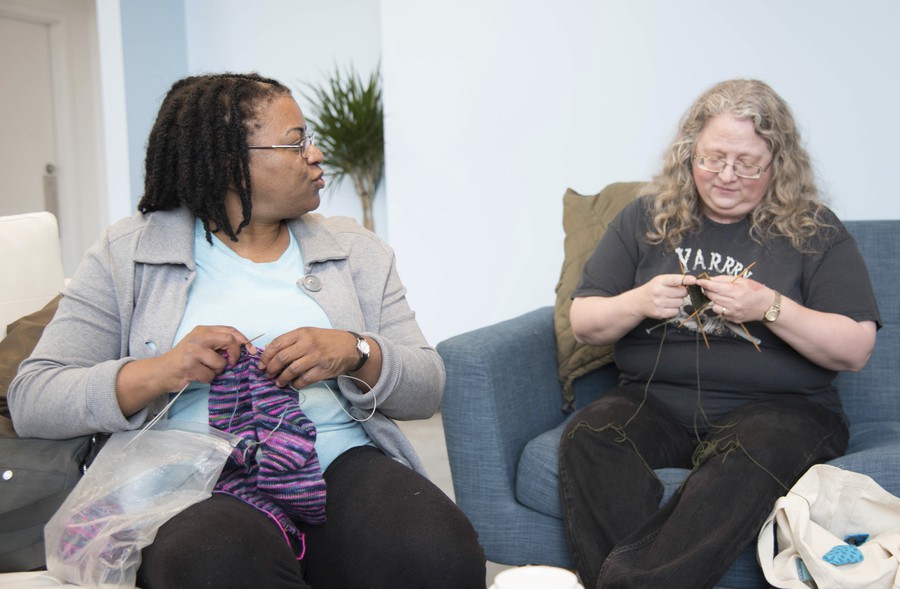 As a local craft group celebrates its fourth anniversary, its members continue to use their knitting needles and crochet hooks for good in Hyde Park and across the city.

When Tina Miklas arrived in Hyde Park in February 2015, she started Fiber Friends Studios with five other crafters at the Currency Exchange Cafe on East Garfield Boulevard. She started the group online to increase access to crafting spaces on the South Side.

“As someone who was born and raised in McKinley Park, lived in Bridgeport, Pilsen, and Brighton Park, I never understood why the South Side was so underserved. I never wanted to ‘go north,’” Miklas said. “I had to do more to serve my community. I organized the first meet-up to connect with other crafters and to support businesses on the South Side.”

Since the group’s inception four years ago, the members still meet up weekly. Their members include retired school teachers, businesswomen, community members, and women from across the city. Members come from as far as Belmont Cragin to be a part of this knitting community that they have formed. Now, they take their needles and yarn to Dollop Coffee Co., Robust Coffee Lounge, Manny’s Coffee Shop & Deli, and other businesses in the area to knit, craft, and enjoy each other’s company.

“We are a welcoming group that invites people from varied backgrounds, skill sets, and crafting interests to the table. Our members come from all walks of life—every income level, ethnicity, age, and sex…. We represent various ages: The youngest knitter was eight years old and the oldest was 91!” Miklas said.

Each member has their own reasons why they return weekly, with one citing camaraderie while others saying they enjoy the sense of accomplishment that comes with working on projects.

The support that Fiber Friends has fostered has found its way into the local community through philanthropy and community service events centered around their creations. In 2016 and 2018, Fiber Friends organized Knitted Knocker-thon, where crafters knitted and crocheted handmade breast prostheses that were donated to local breast cancer support groups like Chicago-based Sisters Working It Out, who work to eliminate breast cancer disparities across Chicago.

Many members also volunteer with Committed Knitters, a group of volunteer knitters and crocheters who visit Cook County Jail multiple times a week to teach female inmates how to knit and crochet.

This past winter, Fiber Friends organized Warm Up Hyde Park, where members knitted and crocheted hats, scarves, gloves, and other winter accessories to be placed in public places for anyone in need to take.

“We knitted and crocheted hats and scarves benefiting Blackstone Library, local schools and other locations where those in need might attend,” Miklas said. “Our hats and scarves decorated trees and covered fences, and were there for anyone in need to take.”

Miklas said that in the future, she hopes to partner with a local nonprofit to expand “Warm Up Hyde Park” to the entire South Side.

Ultimately, Miklas and the other members of Fiber Friends agree on the impact of knitting and crocheting.

“It’s so much more than just knitting. Every stitch builds community,” Miklas said.