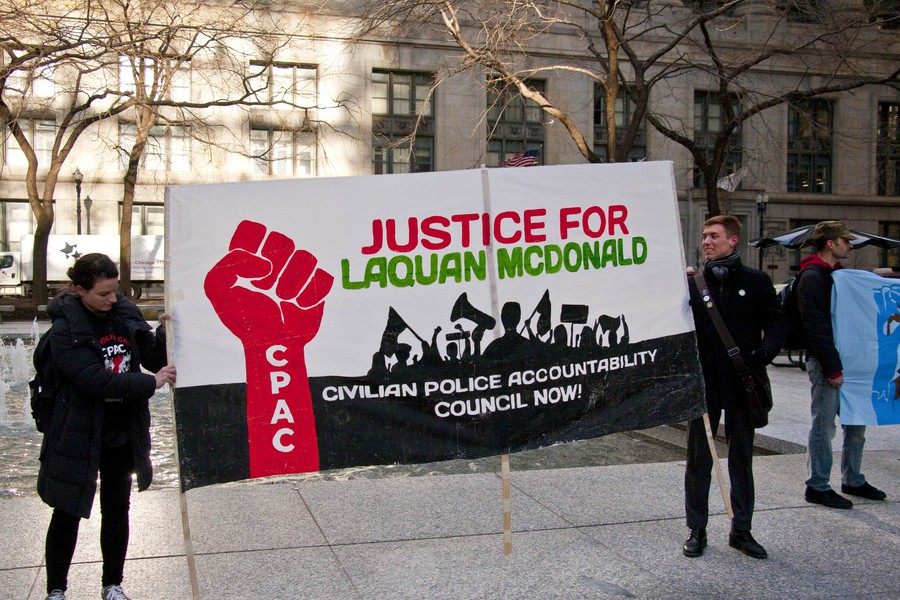 #NoCopAcademy activists held a protest on the 50th anniversary of the assassination of Dr. Martin Luther King Jr.

38 aldermen voted in favor of awarding an $85 million construction contract to engineering company AECOM, with eight aldermen against it. Zoning changes for the academy also passed without debate.

The proposal for police and fire training academy in West Garfield Park has drawn criticism from community groups since it was introduced in 2017. Black Lives Matter activists, high-profile names like Chance the Rapper, and other activists under the #NoCopAcademy label have suggested that the academy would take up funding that could be better used toward housing and employment initiatives. Emanuel has repeatedly said that the academy will spur economic growth on the West Side. He has also stressed that the academy represents a productive response to the Department of Justice’s investigation into the Chicago Police Department following the fatal shooting of teenager Laquan McDonald by former police officer Jason Van Dyke in 2014.

Both mayoral candidates in the April 2 runoff election, Toni Preckwinkle and Lori Lightfoot, have said that City Council and Emanuel should not move forward with the approval process and that the final decision should be made once the next mayor enters office.

However, the two candidates’ objections to the current police academy proposal run in opposite directions. Preckwinkle has said she believes the $95 million budget for the academy is too high, and that any decision on the academy should follow more intensive debate on public safety. Lightfoot, meanwhile, has expressed support for a larger, more expensive complex that could be used by local, state and federal law enforcement, and has pointed to New York City’s recent plans for a $750 million academy.

I commend #NoCopAcademy youth and activists for raising their voices for real investment in public safety via schools, jobs and mental health. My position on the academy is unchanged: As Mayor I will not proceed with this project until we have a real conversation on public safety

Incumbent Fifth Ward Alderman Leslie Hairston was the only Hyde Park–area alderman to vote against the proposal. Hairston had previously voted in favor of the academy.

Hairston took to Twitter on Wednesday afternoon to counter suggestions that she had changed her vote to curry favor with constituents during election season, saying that meeting with activists had convinced her that the proposal should not “be rushed through.”

The five-term incumbent faces a runoff against community organizer Will Calloway, who helped secure the release of video footage of Van Dyke shooting McDonald in 2015.

I met w/the people who oppose the cop academy. After listening to their rationale, they raised some really good points. While a state of the art training facility is needed, this isn't the kind of project that should be rushed through so this mayor can leave a legacy. https://t.co/g5efdd2Pq5

Organizers from the #NoCopAcademy movement protested at Wednesday morning’s City Council meeting. As Emanuel took to the podium after the vote, protesters shouted, “No cop academy, $95 million for the community!” and “16 shots!” in reference to the number of times Van Dyke shot at McDonald.