Hedwig Creator Brings Songs, Stories, and the Wig to Chicago 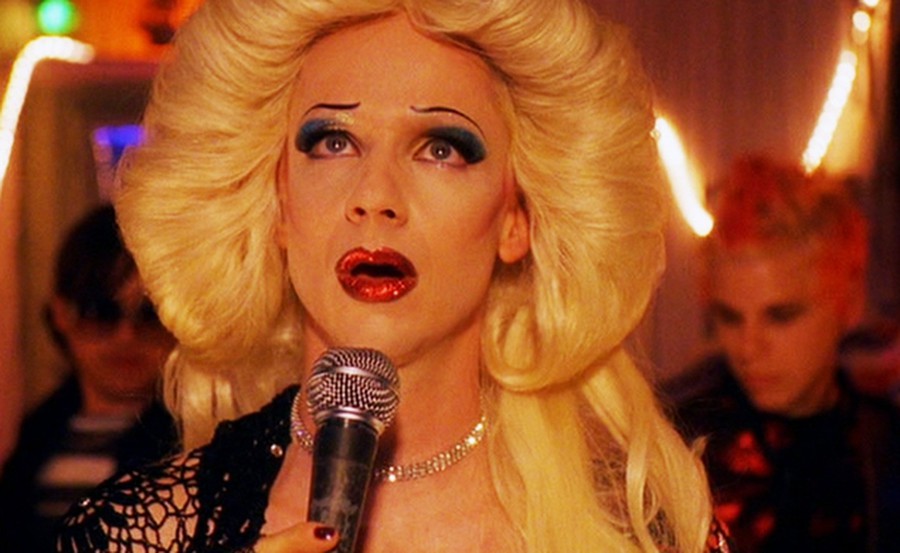 In 2001, John Cameron Mitchell played Hedwig in the film adaption of "Hedwig and the Angry Inch." Now, 18 years later, he is bringing Hedwig back with The Origin of Love Tour.

It all feels awfully familiar. The figure before us, the one we all came to see, is decked out in glitter, a gaudy outfit, and the iconic blond wig designed by Mike Potter way back in 1994. But even with the occasional slip into that faux German accent, the character is quick to set the record straight: “I’m not Hedwig, I’m John!”

Few theater fanatics are unfamiliar with Hedwig and the Angry Inch, the iconic musical about transgender East German rock singer Hedwig Robinson. 25 years after debuting the character at NYC drag club Squeezebox, 21 years after the musical’s Off-Broadway premiere, 18 years after he directed and starred in the film adaptation, and 4 years after he reprised the role on Broadway, writer and original star John Cameron Mitchell is pulling the wig down from the shelf and taking it on the road with The Origin of Love Tour, a celebration of music and stories from Hedwig.

The concert’s stop at the Athenaeum Theatre marked a return to the city for Mitchell, a Northwestern graduate who got his start in the Chicago theater scene. Mitchell was backed by singer Amber Martin and the band Tits of Clay, the same group that took on the role of Hedwig’s band the Angry Inch on Broadway and the national tour. Hedwig co-creator and songwriter Stephen Trask was unable to attend but Mitchell made sure to call him early on so he could hear the audience thank him for bringing Hedwig’s music to life.

Despite wearing one of the original wigs, Mitchell made it clear to the audience that we were not just seeing another performance of Hedwig and the Angry Inch. The concert began not with the explosive “Tear Me Down” but the more subdued “The Origin of Love,” which Mitchell explained was the first song Trask wrote for the character. Mitchell accompanied songs with reflections on the history of the musical. It grew from workshops in drag clubs across New York, to a giant, packed theater with long-time “Hedheads,” Recognizable Hedwig pieces like “Sugar Daddy” were showcased, as well as the cut song “Milford Lake,” a haunting piece about a town buried by a reservoir. A brief interlude featured a rousing rendition of “Ziggy Stardust” by Amber Martin, paired with an amusing anecdote about David Bowie’s reaction to the musical. The band returned to the stage for an encore, starting off with “Tear Me Down” (with a lyric regarding the Berlin Wall updated to a chant of “No more walls.”)  They followed this with songs from Mitchell’s upcoming musical podcast Anthem, music featured in his recent film How to Talk to Girls at Parties, and an enthusiastic rendition of “Sweet Home Chicago,” closing with a performance of one more song from Hedwig, the punk-heavy “Angry Inch.”

As a casual Hedhead myself (I saw the musical four times on Broadway, I caught the tour while it was in Chicago, and yes, I own several bootlegs of various incarnations of the musical), I am of the opinion John Cameron Mitchell is one of the most underrated artists of this era. Backed by 30 years of experience as an actor, writer, and film director, he has ease and comfort telling stories and anecdotes, eclipsing the skills of some stand-up comedians. Even as he nostalgically recalled the process of creating Hedwig, he was able to keep the atmosphere light. Running jokes referring to his past roles on MacGyver and as the voice of the Dunkaroos kangaroo (his faux Australian accent reportedly did not amuse frequent collaborator Nicole Kidman) kept everyone laughing, as did references to his time at Northwestern. Repeated references to Jussie Smollett and R. Kelly occasionally made the audience squirm, but he avoided reaching the point of poor taste by giving his honest thoughts on the situation, which were often amusing enough on their own.

This performance resembled more of a rock concert than the more structured musical theater of Hedwig. Mitchell’s stories of some serious moments in the musical’s creation were occasionally interrupted by loud drunken shouts attempting to make a joke out of them. Most egregiously, after spending much of the concert talking about his six-year relationship with original Hedwig bassist Jack Steeb, his admission prior to the performance of “Midnight Radio” that Steeb had passed away from alcohol addiction was loudly interrupted by a lady shouting enthusiastically “R.I.P. Jack!” which the rest of the audience was quick to shush. Like Hedwig, it was clear that Mitchell was invested in sharing his story with the audience. And yet, the rock concert atmosphere of the performance often got in the way of this mission

Mitchell’s reflections on the character of Hedwig included an acknowledgement that the character does not exist within a political vacuum: The character’s origins in the drag scene can undercut the fact that drag and trans identity are generally considered separate, and he has updated some of the show’s language to reflect an evolving world (including dated terms referring to transgender identity that are no longer considered politically correct). Perhaps his strongest remark was that if the Hedwig character came out today, she would not consider herself a trans woman as she was forced by a system of abuse into her situation, and that overall her identity does not subscribe to the gender binary, instead favoring “a gender of one.” His reflections, as well as occasional comments that he was too old for some of the stage antics he engaged in, reminded us just how long it’s been since he created the character, and how much the world has changed in that time.

And yet The Origin of Love felt like a reassurance that in the midst of this landscape there’s still Hedwig and her music that portrays love in all its forms, from familial to pure to painful—and most importantly, the love and acceptance of oneself. The world changes and John Cameron Mitchell can’t play her forever, but Hedwig and her message is eternal.