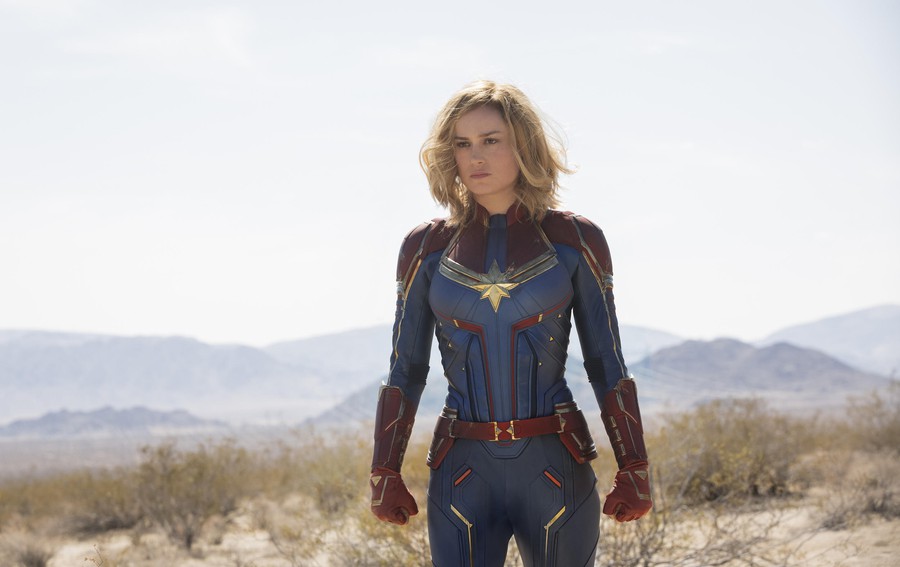 Captain Marvel manages to live up to its overhyped billing, despite the exaggerated critiques in recent reviews.

Captain Marvel is the latest in a long line of comic book movies with unrealistic expectations thrust upon it, inspiring spirited debate in online communities before it was even released. Depending on which online communities you frequent, the first female-led superhero movie of the Marvel Cinematic Universe (MCU) was either a shining example of representation in popular media or a sloppy attempt at feminist propaganda.

It would be impossible to talk about the movie without addressing the hype around it that simply got out of hand. I’ll say this: I think it is undoubtedly good that Marvel released a movie starring a superhero who is a woman, but I do not think that has any bearing on whether or not the movie itself is any good. Social change does not start and end with one film. If Captain Marvel turned out to be completely awful, another good female-led superhero movie would soon emerge in its stead.

Having promptly addressed the elephant in the room, I can happily report that Captain Marvel is not awful—far from it. It is an enjoyable film that, while relying heavily on the established tropes and the feel of the MCU so far, will not leave comic book movie fans unsatisfied. Telling the story of an Air Force pilot turned space warrior amnesiac, Captain Marvel relishes its decidedly ’90s setting as Vers (a.k.a. Carol Danvers—Captain Marvel herself—played by Brie Larson) finds out about her forgotten life on Earth and the origin of her mysterious powers. Blockbusters, pagers, electronic music, and Gwen Stefani abound as Danvers demonstrates via colorful fight scenes that she deserves the title of most powerful hero in the MCU.

The performances in this film are mostly compelling. Larson plays the fish-out-of-water role with an emotionally detached disposition that, while firmly establishing her as a badass space warrior, also occasionally makes it difficult for us to empathize with her. When she does have emotional moments, especially with her best friend who is played brilliantly by Lashana Lynch, she briefly shows us a peek at her Oscar-quality acting chops. Though I wish there were more of these emotionally resonant scenes with Larson, I believe the film lays good groundwork to explore these more human aspects of her character in later installations.

The rest of Captain Marvel’s supporting cast is quite impressive. Samuel L. Jackson has gotten good at doing the Nick Fury shtick by this point and he does not disappoint in this film. Especially impressive is the advanced de-aging CGI used to make him look like pulp-fiction era Sam Jackson—after a few scenes the CGI blends in and you begin to believe that you are watching an actual younger version of the actor. Disney’s team at Industrial Light and Magic has much reason to be proud. The stand-out actor of the whole cast, however, is easily Ben Mendelsohn. He delightfully chews the scenery in his role as the commander of a race of green aliens who can shapeshift into anyone they see. Mendelsohn seamlessly transitions between moustache-twirling villainy and relatable critique on war, like a true master of his craft. Even in bright green makeup and alien prosthetics, his performance is captivating and displays more pathos than arguably anyone else in the cast. Certainly more than Jude Law, who plays Larson’s friend and a member of the space warrior Kree race in an utterly forgettable performance. There’s also a cat, named Goose in reference to the ’80s film Top Gun, which quickly became an audience favorite because of his utterly adorable antics.

The film’s plot is nothing to write home about. Fairly standard superhero tropes are everywhere, with predictable twists and canned emotional beats. That could be said of most modern superhero movies, however, so fans of the genre will not be put off by the movie’s paint-by-numbers approach to storytelling.

This movie is not exceptional, so it doesn’t quite reach the emotional intensity and action-packed excitement of recent MCU films like Black Panther, nor the creative genre-redefining filmmaking behind Thor: Ragnarok. What it does provide is an enjoyable time out at the movies while introducing a character that will be extremely important for the MCU in years to come. Captain Marvel, then, amounts to an experience that is more than the sum of its parts. Considering the extreme pressure put on this movie as a sign of the MCU to come, it does quite well and does not buckle. I personally can’t wait to see more of Carol Danvers in Avengers: Endgame next month.