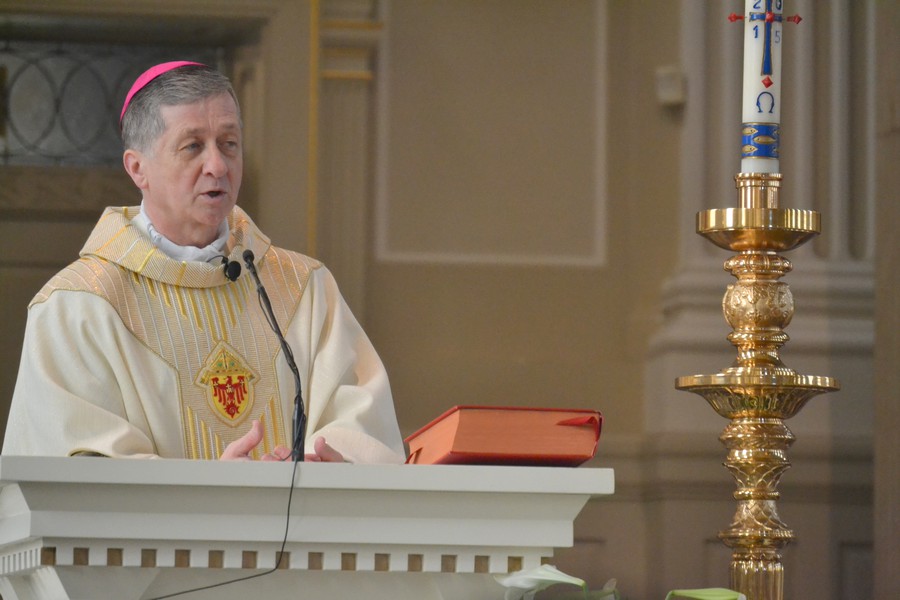 Cardinal Blase J. Cupich, archbishop of the diocese of Chicago and architect of a controversial proposal for bishops to handle sex abuse allegations, presided over mass at Rockefeller Memorial Chapel on Saturday, March 2.

The service was organized by Calvert House, the Catholic center of the University. The center’s director, Father Andrew Liaugminas, participated in the service along with several students, who served as liturgical ministers and performed music and other duties during the service.

You can listen to the podcast version of this story, by Jack Cruz-Alvarez and Natalia Rodriguez, on iTunes and Spotify.

Recently, Cupich’s name has appeared in relation to former cardinal Theodore McCarrick, who also served as the archbishop of Washington, D.C., and was ousted after church leaders found him guilty of sexual abuse. In a letter, Archbishop Carlo Maria Viganò warned the Vatican of McCarrick’s actions and also accused McCarrick of orchestrating Cupich’s appointment as archbishop, claiming the appointment reached the pope irregularly and without being presented to the Vatican embassy.

Cupich was also accused of being insensitive to the issue of sex abuse in the Catholic church following an interview after the letter surfaced, where he said the pope has “got to get on with other things, of talking about migrants and carrying on the work of the church. We’re not going to go down a rabbit hole on this.”

After the interview aired, Cupich directed priests in the Chicagoland area to denounce the report, saying reporter Mary Ann Ahern of NBC 5 Chicago had mischaracterized his statement. Cupich clarified that in the interview he had referred to the letter accusing McCarrick of sex abuse as a rabbit hole, “not the crime of clergy sex abuse.”

Near the end of February, Cupich attended a summit at the Vatican where he proposed a plan for addressing questions of potential sex abuse that would involve having metropolitan bishops oversee investigations when cases arise. However, according to the National Catholic Register, U.S. bishops are concerned about the effectiveness of such a plan, with some calling it simply “bishops policing bishops.”

The cardinal’s homily advised churchgoers to think outwardly during Lent about being charitable to others and ensuring their legacies will be well-regarded in the future.

Cupich has served as archbishop of Chicago since November 2014 and was elevated to the position of cardinal in November of 2016. This is not his first visit to campus; Cupich participated in an event hosted by the Institute of Politics in 2017.

During the event, E.J. Dionne, a columnist for The Washington Post, spoke with Cupich about the intersection of faith and politics the day after a shooting in Sutherland Springs, Texas, where 26 people were killed at First Baptist Church. Cupich has spoken up about gun violence in Chicago and the U.S. broadly, and has advocated for greater gun control.

“It is important to do mourning and support and expressions of outrage, but then also we need to tell ourselves ‘But that’s not enough.’ We need to take action. We need to make sure our legislators know that we need to enact laws that ban these high-powered weapons,” he said at the 2017 event.

A quote from the Quadcast interview was removed from the article, at the request of the quoted individual.