Pro-Palestinian protesters interrupted a talk at the Law School and were escorted out by UCPD. 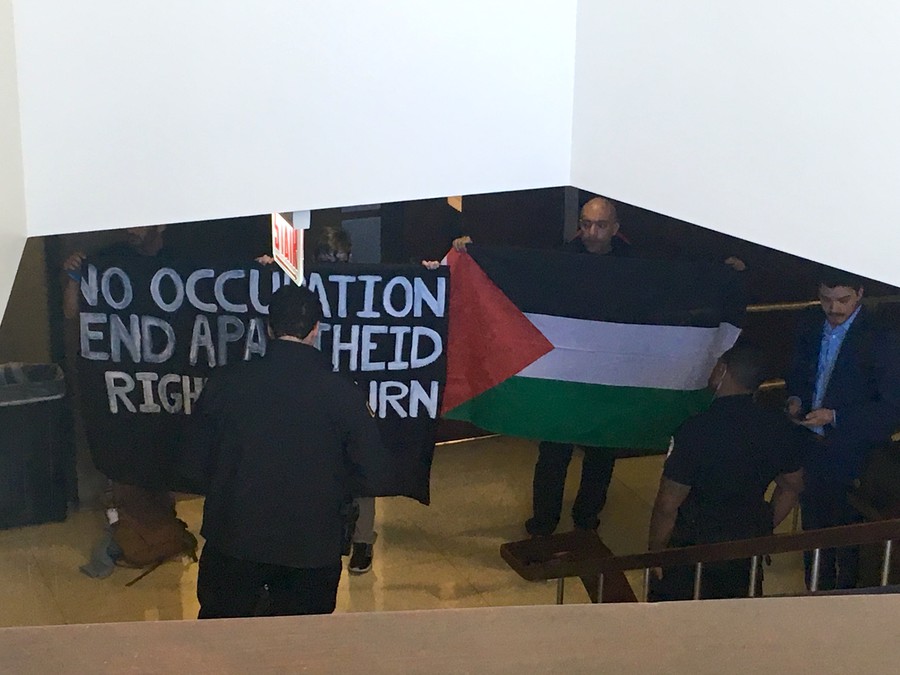 The protestors standing outside the talk

#CareNotCops Rally: Around 40 activists from the University and greater South Side gathered in front of Levi Hall on Wednesday to demand that the University release its budget and allocate less money to the University of Chicago Police Department (UCPD).

The popular Core class Global Warming: Understanding the Forecast has adopted a “flipped” class format this quarter, meaning that students will receive primary instruction through online videos. Rather than traditional lecture-style classes with a faculty member, the format relies on graduate students for in-person teaching.

Booth School of Business will relocate its London campus to a larger facility by spring quarter of next year.

A new Health and Society minor will be offered beginning next fall.

The Willy Wonka of comic shops? A law school alum is giving away his comic book store to one lucky winner of an essay contest.

Track and Field starts spring quarter off with the Wheaton Invitational. The good weather heralded a slew of individual wins for both the men and women’s teams.

Softball took on Kalamazoo for a doubleheader, winning the first game and losing the second.

Men’s Tennis took on Illinois Tech with an impressive 9–0 victory, adding to their stellar 12–1 season record.

Fulfilling the final promise of the Reparations Ordinance, artists display designs for a public memorial at the Arts Incubator.

While Andrew Bird’s repertoire borrows from a number of genres, the compelling combination of bleakness and yearning hope that permeates My Finest Work Yet is entirely his own creation.

In a Letter to the Editor, UChicago United and Students Working Against Prisons promote the #CareNotCops movement and demand increased UCPD transparency.

What’s it like to take a leave of absence? Grey City found that there were no two identical experiences after talking to a range of students and alumni.

This week in the news: Law school admissions leak, mayoral and aldermanic runoff elections, Class of 2023 admit rate leaked, and much more.

The article has been corrected to reflect that Nadine Strossen is a professor at New York Law School, not NYU Law School.