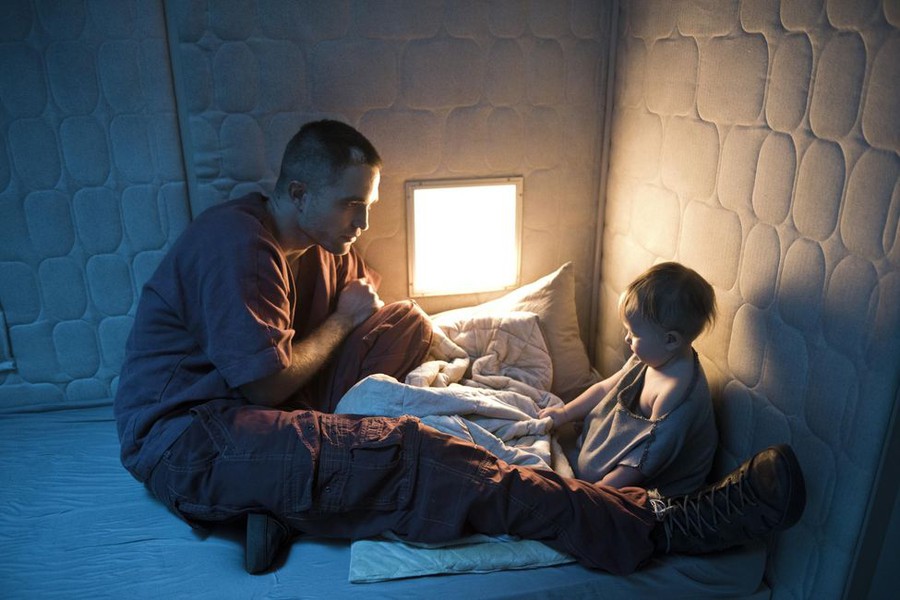 On Wednesday, the first-ever photograph of a black hole was released. As the L.A. Times reported, its mass is 6.5 billion times greater than that of our sun, and “its powerful gravity bends the fabric of space and time around it.” This breaking story came days after Doc Films’ screening of Claire Denis’s newest film, High Life, which follows a spacecraft filled with death-row inmates on a suicide mission to a black hole. But Denis’s black hole resembles nothing of the sublime, unimaginable object in the news this week. In High Life, the spacecraft, which Denis designed to resemble an unglamorous “shoebox,” contains within it a world free from the cosmic, space-warping power of the black hole. However unnaturally the people aboard seem to bend, it is not the black hole, but their own inherent violence, that contorts their humanity.

Most synopses of High Life focus on the “seed of an idea” from which Denis’s script grew over the past decade: a father (Robert Pattinson) and his baby girl alone in outer space. Yet, while it begins and ends with this framing device, much of the film is spent in flashback, showing life aboard the ship when it was still filled with other inmates. Played by an overall impressive cast, including Mia Goth, André Benjamin, and Juliette Binoche, the small cohort of prisoners are relentlessly violent and unpredictable. And, as far as we know, they have always been so.

The entire film takes place in their traveling jail, a self-sustaining vessel where not only plants, but humans too, are bred in captivity. Denis uses the cramped set to play with lighting and characteristically haunting imagery. We get to know every vein on Pattinson’s forehead, and every muscle in Binoche’s thigh. All of these images are bathed in a blue light that sucks the life out of even the most corporeal shots. As Denis explained during a Q&A (moderated by Michael Phillips of the Chicago Tribune and Professor Daniel Morgan of the University of Chicago), the light was modeled after the International Space Station’s mimicry of natural light patterns. Much of the film, in fact, has the feeling of being modeled after life, always falling frustratingly short of the real thing. This lifelessness also means that Denis’s most unflinching and daring scenes of violence and sensuality are perhaps not, in fact, so daring after all.

The “story” of the crew’s time aboard is really more of a series of horrifying images—a collage of bodily fluids exchanged in every imaginable way (except, perhaps, through intimacy). Dibs (Juliette Binoche), a Medea-inspired evil doctor, is tasked with watching over the prisoners’ health, but she torturously watches and controls the other inmates as the film progresses. Sometimes, it seems as if Dibs, with her waist-length black hair and “witch” face, keeps the passengers alive simply to prolong the audience’s discomfort, to buy time for more nauseating spills of blood, semen, and hope, and a climactic escalation that never comes.

Sci-fi, when done well, can act as a testing ground for extremes. It can take an everyday concern and grow it to surreal proportions. But High Life doesn’t do this. While the spacecraft is an incubator in every other sense, Denis does not use it to grow or experiment with “concepts.” As she stated during the Q&A, “I don’t work with concepts…. I try to make film with material I know.” Unlike works such as Westworld, which uses a sci-fi premise to take technology and consciousness to their hypothetical extremes, Denis starts with extremes. Her raw material—the cast of humans who enter the jail-ship—are already the most violent and abhorrent individuals that one can find.

And, while Westworld uses unflinching brutality to signal that something has spiraled out of control, what is the purpose of gore in High Life, where the spacecraft comes pre-loaded with violent creatures? Denis’s reaction-inducing scenes don’t signify anything. They are not the culmination of familiar ideas taken to their limits, but rather, are extremes for their own sake. No matter how frequently she throws in offhand hints that her scenes are allegorical, they don’t really seem to represent anecdotal nor societal commentary either.

The violence onboard the ship, for instance, doesn’t show much about being in close quarters. While in the Q&A Denis made some interesting remarks about the connection between intimacy and violence in jail, it is hard to see the correlation between the inhumanity portrayed and the cramped space. The inmates were pitiless long before they were in outer space. And Binoche’s doctor character comes with a Medea-like backstory built in, so that even her thought-provoking obsession with breeding a child in space is not an idea that the film must bother developing. Sure, maybe the corporeal scenes do not have to be driven by a “concept,” but is reaction really a sufficient reason to include them?

I’m avoiding phrases like “mindless violence” or “mindless sex”—terms that have come to be such familiar critiques of shows like Game of Thrones—because there is clearly something unique in Denis’s use of violence and sex. It’s not “mindless” in the same way, partly because it’s not pleasurable; it doesn’t really entertain or get the heart racing, and it certainly doesn’t draw a pop audience. If anything, it feels like a dare—a dare to keep watching, as challenging and mocking as her jab at her interviewers during the Q&A. When asked about the significance of violence and intimacy, she laughed, “Haven’t you noticed the world is violence?…. Maybe Chicago is a soft city.” High Life, like her dismissive answer, feels like a dare to keep your eyes on the screen, to say “Of course I know that the world is violent!”

But then the film is over, and you can’t help feeling ridiculous for having kept watching. Like a child too eager to prove themselves, you’ve fallen into the trap of Denis’s mocking challenge, and made a fool out of yourself in the process.