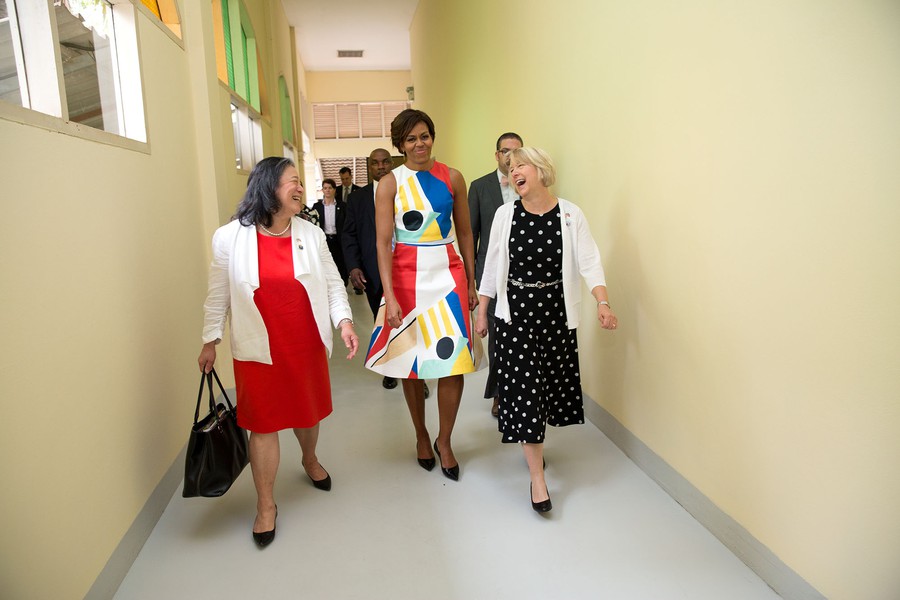 Tina Chen, then Assistant to President Barack Obama and Chief of Staff to First Lady Michelle Obama, on the First Lady's 2015 visit to Japan and Cambodia.

As to why Tchen had been chosen, Balan shared, “This year, the theme of SAAM as created by the NSVRC is ‘I Ask for Consent.’ Rarely do we talk about consent as it applies to more nuanced interactions…. Tina Tchen's work with the White House [Council] on Women and Girls and her work with workplace sexual violence and collegiate sexual violence makes her particularly apt to speak on the subject.”

“I’ve been at this work for probably nearly 40 years, but the statistics haven’t really moved,” Tchen said, surrounding the importance of this year’s SAAM. “Nearly one in three women and one in six men will experience some form of sexual violence that includes physical contact in their lifetime.”

Tina Tchen’s battle for sexual assault prevention and reform began in Springfield, Illinois in 1978 where, alongside many of her female colleagues, she pushed for Illinois to ratify the Equal Rights Amendment, which ensured equal rights regardless of gender in matters of divorce, property and employment. “Last year Illinois finally ratified the E.R.A…. We didn’t get it back then, [but the work] still imbued in me a commitment to gender equity and the protection of others.”

She said that during her student life at Northwestern’s law school, “[Illinois’s rape laws] were among the most antiquated in the country.”

“We rewrote our sexual assault laws,” Tchen said of her work on the Illinois Criminal Sexual Assault Act in 1984 alongside several institutions for sexual assault prevention and protection of women.

“It’s hard to remember now, but sexual assault used to be defined in Illinois just as rape, which was defined as being committed by a man over the age of 14, against a woman, not his wife, by force and against her will.”

Tchen made strides to change this definition of rape, as it excluded many groups of people whether they were male victims, members of the LGBTQ+ community, or married to the perpetrator.

“We knew that there were gangs in Chicago that we had documented that knew those under the age of 14 couldn’t be charged with rape, so there was a gang initiation rite to commit a rape before they turned 14,” shared Tchen.

Tchen spoke of her involvement with the Council on Women and Girls during her years in the Obama Administration. “The idea behind the Council on Women and Girls was to create a council of all federal entities…so that the president could charge all of them with addressing issues with women and girls.” This council dealt with issues ranging from rape kit backlogs to the Violence Against Women Act reauthorization in 2013.

“I dwell on this for a moment because right now we are in the middle of the reauthorization for the Violence Against Women Act, as it only lasts every five years,” highlighted Tchen. “If you want a little bit of political action, now is the time to make sure the Senate takes up the act. The reason there is a stop limit is [because] it’s got a controversial provision that perhaps people convicted of domestic violence should not have guns, but the NRA doesn’t like it.”

“I need to commend the University of Chicago because your office [dedicated to] sexual misconduct prevention and treatment is a great testament to the ongoing conversation,” Tchen said, following up with statistics in an effort to highlight how the issue of campus sexual assaults persists. “One in five women and six percent of men are going to experience sexual violence during their time in college.”

“The more that we say that this is not the culture we want, the more powerful that change is going to be,” Tchen said, urging attendees to use their power to combat rape culture like Time’s Up and It’s On Us movements have done.