Strahilevitz, who supports the current plans to construct the OPC in Jackson Park, clashed with Epstein, who stands against that position, at a debate held by the Law School student organization Law of the Land. 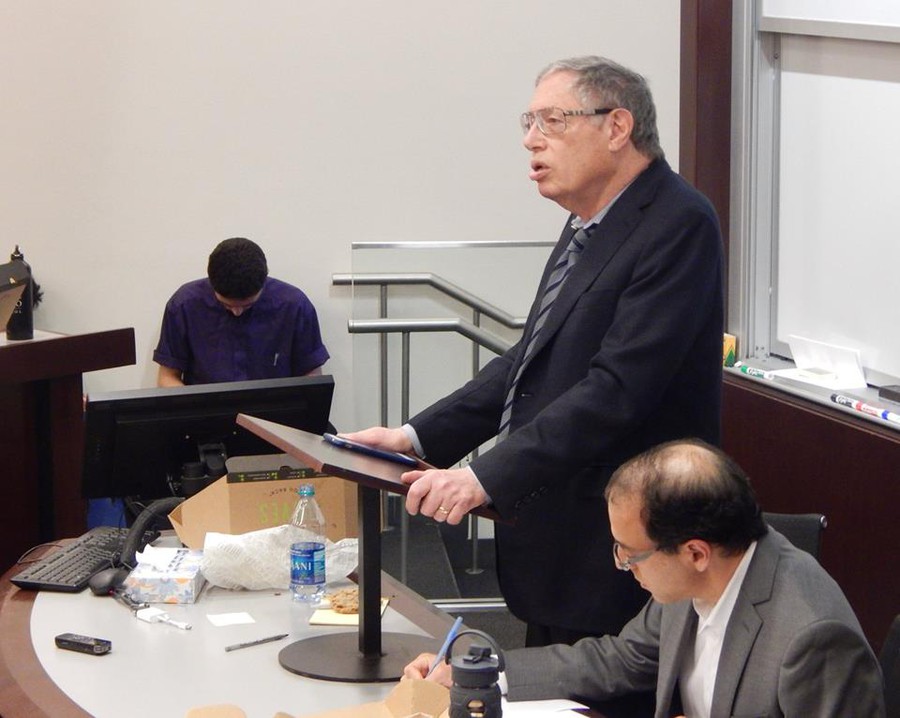 Courtesy of The University of Chicago Law School Federalist Society

Two Law School professors supporting opposite sides of a lawsuit surrounding the Obama Presidential Center (OPC) engaged in a debate and conversation at the Law School on Tuesday.

The student organization Law of the Land hosted a debate between Lior Strahilevitz, who supports the current plans to construct the OPC in Jackson Park, and Richard Epstein, who supports the position taken by Protect Our Parks (POP), the environmental advocacy organization that is suing the City and the Chicago Park District. POP argues that placing the OPC in Jackson Park would be an “illegal” grab of public parkland.

The Environmental Law Society and the Federalist Society co-hosted the debate.

Strahilevitz and Epstein have had an ongoing dialogue regarding the POP lawsuit in relation to the public trust doctrine. They have filed opposing amicus briefs, with Epstein’s January 2019 brief directly responding to a November joint brief filed by Strahilevitz, UChicago Law professor Lee Anne Fennell, and other property law professors.

The debate centered on the invocation of the public trust doctrine in the POP lawsuit and considered many past Chicago lakefront development cases in which the doctrine has been invoked. Both Epstein and Strahilevitz were allowed 10 minutes to provide context for their arguments and then had five minutes to rebut each other. The remaining half hour was left open for questions, allowing equal opportunity for Strahilevitz and Epstein to respond.

Epstein began the debate by providing a brief summary of the factors contributing to cases surrounding the public trust doctrine. The main principle of the doctrine holds as common law that the sovereign, or the body representing the public, retains in trust some resources, such as natural resources such as parkland or shoreline, regardless of the private ownership.

The public trust doctrine’s origins are centuries old, and it has most often been used in cases involving the navigability of waterways and other transportation pathways. To invoke the public trust doctrine, Epstein asserted that there must be a fair value standard, meaning the government must receive as much utility and benefit as the private entity gains from using the land.

The precedent for determining cases in which the public trust doctrine may be invoked is seen as formalized in the 1892 case Illinois Central Railroad v. Illinois. This historic case has particular significance to issues along the Chicago lakefront, as it affirmed that the state government holds permanent possession of all submerged lands.

In Chicago, the notion of submerged lands as state property has permitted the addition of lakefill, which effectively increases the amount of developable land possessed by the state. Epstein and Strahilevitz both noted the instances in which the public trust doctrine has been debated—the construction of Lake Shore Drive and the museum campus holding the Field Museum, Alder Planetarium, Shedd Aquarium, and McCormick place—are all seen as acceptable construction due to Chicago’s lakefront nature and the precedent of state control over submerged land and lakefill.

Using the fair-value standard in the POP case is particularly necessary, according to Epstein, due to the potential conflict of interest presented by former President Barack Obama’s relationship with city officials.

“The former president of the United States is, in fact, as subject to beneficiary rules as anyone else,” Epstein said, elaborating on his concerns regarding President Obama’s relationships with Chicago City officials due to his position of “power, influence, and prestige” as well as the “close connections he has with the mayor of the city.”

“It seems to me that this is a case in which the strict duty of fair value is appropriate for understanding the way in which the particular doctrine ought to be applied,” Epstein said.

Epstein’s opposition to the OPC’s construction is founded in the use of Jackson Park as its location and the lack of consideration for public trust doctrine. He argues Washington Park is a more suitable location that would not violate public trust doctrine and that would not destroy historic park land and would instead offer lower rent, a larger space, greater economic enhancement to the surrounding community, greater accessibility to roadways and public transportation.

“The question is not whether there is some shadow benefit from having the Obama Presidential Center in Chicago. Of course there’s going to be that kind of benefit, but we can have all those particular benefits by going to Washington Park,” Epstein said.

Strahilevitz countered Epstein’s sweeping motion to relocate the OPC to Washington Park by firing off examples of buildings constructed along the South Side lakefront that have been deemed acceptable, asking, “how can it be that Soldier Field is okay, McCormick Place is okay, the Museum of Science and Industry is okay, a drive is okay, a golf course is okay, a bridge is okay, and the Obama Presidential Center is not?”

In a rebuttal, Epstein said the OPC is entirely different than those past situations, and asserted that the destruction of Jackson Park cannot be justified.

“There is not a single social benefit that you cannot achieve by building this in Washington Park,” Epstein said.

Strahilevitz views President Obama’s connection to the South Side and Chicago not as a conflict of interest, but rather as further justification for the OPC to have a place in that part of the city.

In response to Strahilevitz’s view of Obama’s relationship to the South Side, Epstein replied, “When you’re dealing with the public trust doctrine, you are not dealing with the question of popularity.” But Strahilevitz continued to push back, noting the importance of community backing of the project’s figurehead.

“Here’s why what Chicago voters want matters; it matters because the whole purpose of the public trust doctrine is to police against corrupt deals, to police against deals that strip Chicagoans of something that we do value and ought to value: our lakefront,” Strahilevitz said.

The role that community members play in this battle between forces surrounding the OPC construction is an oft-repeated point of discussion. In the question session after the debate, both were asked whether they believed a Community Benefits Agreement (CBA) would affect the status of OPC construction in Jackson Park. Strahilevitz answered cautiously, saying that it is difficult legally to produce an agreement that will offer consistency over a shifting political environment and that does not have a strong stance for or against an agreement. By contrast, Epstein fully supports a CBA that would increase the standard of fair value under public trust doctrine and finds it “arrogant” of President Obama to be so reluctant to offer to establish a CBA.

Even so, Epstein acknowledged the difficulties that will be met practically in the installation of a CBA. “The difficulty is how you try and figure out how to negotiate it. Who counts as the community? Is it people on the periphery, is it people on the construction jobs, people who are going to be displaced?”