Castro signaled his support for legalizing marijuana and expunging criminal records associated with it, as well as reshaping the criminal justice system as a whole. 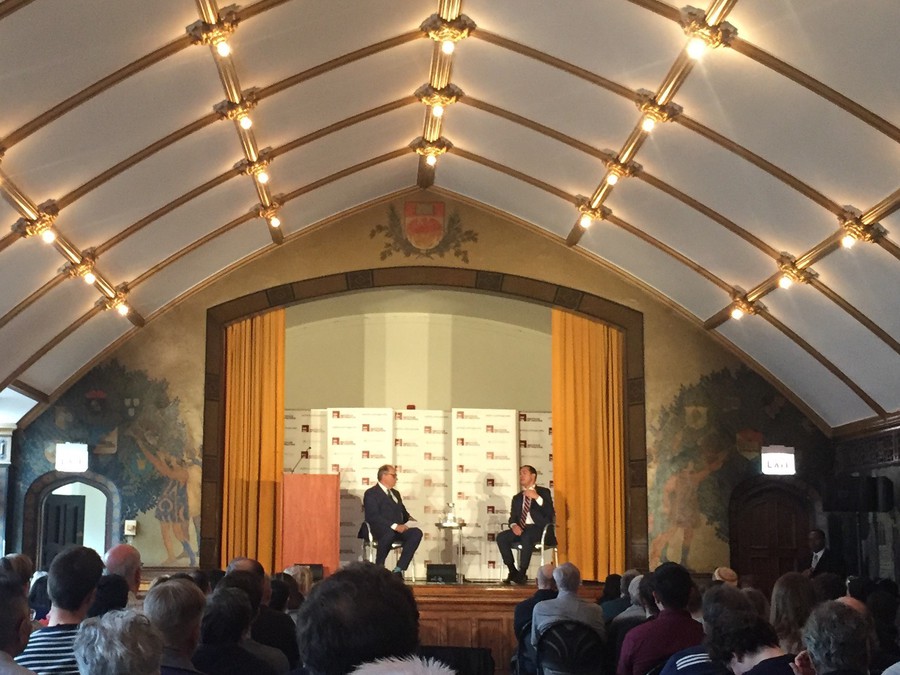 Castro, a second-generation American, was born in San Antonio and served as its mayor from 2009 until 2014 when he was nominated for Secretary of Housing and Urban Development. Currently, Castro is the only Latino presidential candidate; if elected, he would become the United States’ first Latino president.

During his talk in the third-floor theater of Ida Noyes, Castro joked with the crowd and moderator David Axelrod, director of the IOP and a fellow veteran of the Obama Administration. He also spoke about problems that he sees as important for the future of the United States, as well as issues he addressed while working under Obama.

It’s not the first time that the campus has hosted prospective Democratic presidential candidates—Mayor Pete Buttigieg spoke at the Quadrangle Club in February and Representative Eric Swalwell, who only recently announced his candidacy, spoke in March.

Castro pointed out that while he was HUD Secretary, the department helped to cut veteran homelessness by almost 50 percent. He addressed the fact that veteran homelessness was not ended entirely by 2015 as the administration had planned, but stressed the importance of still trying to “be bold and work toward” lofty goals, even if they may come up short.

Much of the evening was dedicated to Castro’s opposition to President Donald Trump and his policies, similar to Castro’s CNN town hall just five days earlier.

“I think the theory of a lot of people about this race is what people are looking for is the opposite of Donald Trump,” Castro said, characterizing himself as completely different in temperament from the man he called “hyper-emotional and irrational, and half the time out of control.”

Castro stated that his very first move once assuming office would be to issue an executive order realigning the United States with the goals of the Paris Climate Agreement—a sentiment Castro has advocated before. Trump withdrew the United States from the accord in 2017.

Branding Trump as “cruel enough to separate little children from their mothers,” Castro promised a reversal of the president’s border policies that would be based on compassion while still maintaining a secure border—treating border-crossing as a civil, rather than criminal, issue.

“I take a smart, strategic, and compassionate approach to immigration,” he said.

Castro signaled his support for legalizing marijuana and expunging criminal records associated with it, as well as reshaping the criminal justice system as a whole. He also discussed prioritizing the public education system, increasing affordable housing, and raising the minimum wage—issues he sees as “fundamentally connected” to the plight of incarcerated persons.

Castro cited his experience as mayor of a large and diverse city as an aspect that sets him apart from the already-crowded set of Democratic nominees, many of whom have no executive experience.

“I think the reason you’re seeing people gravitate towards mayors is because being mayor is all about cutting through the crap and getting things done, and that you’re measured on your ability to get things done,” Castro said.