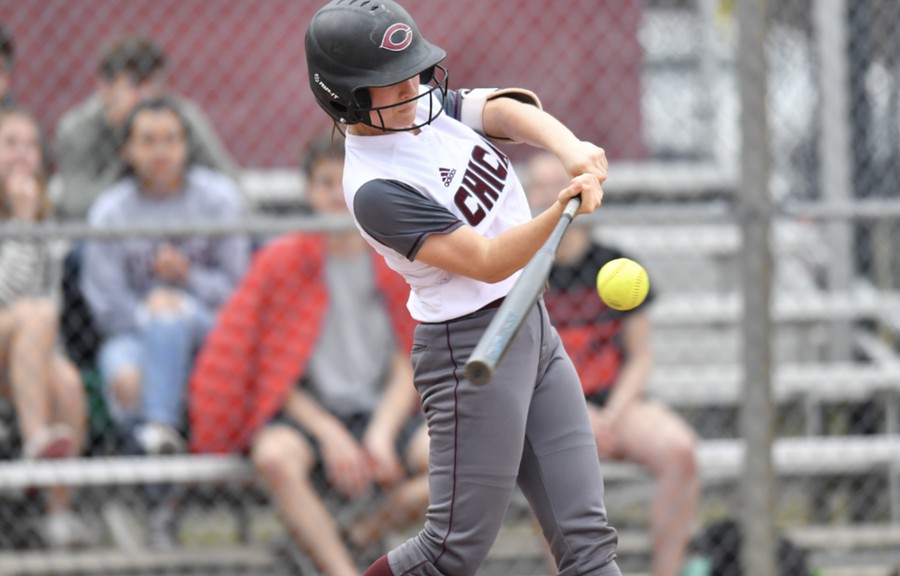 Katie O'Donnell, hero of Game 1 against Hope, swings at the plate.

The University of Chicago softball team split their doubleheader with Hope College on Tuesday, April 16. The Maroons won the first game 6–5 with a home run from first-year Katie O’Donnell. The team lost the second game 4–9, although it was off to a great start with three straight singles as fourth-year Maeve Garvey plated the first run.

For the first game, the Flying Dutch started off strong and took control in the first half, leading 4–0 by the end of the third inning with two singles, an error, and a sacrifice fly. But the Maroons did not back down. When fourth-year Colleen Bennett scored the first run for the Maroons in the fifth inning, she gave the Maroons back their momentum. The bases filled up with third-year Emma Nelson on third, first-year Samantha Lauro on second, and first-year Savannah Pinedo on first. O’Donnell was the next batter and she homered to the left field, putting the Maroons in the lead by pushing the score up to 5–4. Nelson recounts, “The first game, we were down 4–1 and first-year Katie O’Donnell hit a grand slam that got us back in the game.”

The Maroons remained in the lead for the rest of the first game as Bennett scored again in the sixth inning and encountered a close call when the Flying Dutch scored on a wild pitch in the seventh inning. The Maroons won the game with the final score of 6–5.

In the second game, the Maroons made the first score with Garvey plating the run. The Flying Dutch came back strong by putting up five runs by the end of the first inning. In the second inning, the Maroons tried to take back the lead as Bennett and Nelson scored one after another, bringing the score to 6–3. The strong defense on both teams ended the next three innings without a score.

The Flying Dutch continued to take control by scoring three more runs in the sixth inning. Though the Maroons fought back, they were only able to score one. The Maroons lost with a final score of 4–9. Nelson comments, “Both of the Hope games were kind of crazy because we had to face six different pitchers. It was fun to watch our batters figure out what each one was throwing. The second game, we fought against three pitchers yet again, but couldn’t quite push enough runs across to get the second win.”

The Maroons ran their record to 11–15, after splitting a pair with Lawrence University over the weekend. They look to improve as they take on four teams this week: North Park on Tuesday, April 23; Aurora on Wednesday, April 24; Roosevelt on Friday, April 26; and Wheaton (Ill.) on Saturday, April 27.