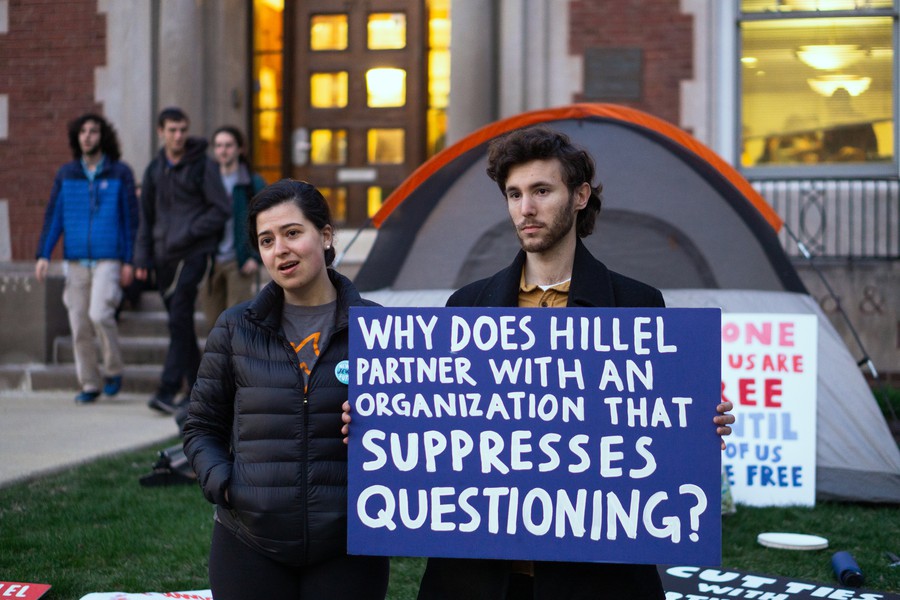 Protesters with UChicago IfNotNow sit in outside UChicago Hillel to protest Birthright.

Activists from IfNotNow, a progressive Jewish organization, held a sit-in outside UChicago Hillel last week to demand that the organization stop taking students on sponsored trips to Israel through Birthright.

Grad unionization heats up: Across Chicago, graduate students at private universities are intensifying their efforts to negotiate with administrators—even as President Trump’s appointees to the National Labor Relations Board make them wary of formally petitioning for recognition.

UChicago Labor Council, a newly formed coalition of worker unions at the University, will hold a May Day March on International Workers’ Day—this Wednesday from 11 a.m. to 2 p.m.

The Budlong, a fried chicken chain with locations in Chicago and Denver, will open its first South Side location in the space currently occupied by BBQ Supply Co., Chicago Eater reported.

Newly reelected Fifth Ward Alderman Leslie Hairston held her first meeting with constituents since she was declared on Tuesday to be the winner of a long runoff election.

Following terrorist attacks in Sri Lanka on Easter Sunday, the South Asian Students Association held a vigil on the main quad on Thursday.

The Chime of Heart Trio, which includes UChicago second-year Jacob Walter, has released a music album to help fund the de-mining of Cambodia.

“The theme for the show this year was ‘gold,’ which third-year co-president Layla Al said was meant to be ‘timeless and big enough to encompass what this year meant for [them].’”

Columnist Natalie Denby points out the flaws in equating rankings and admissions statistics to the quality of a university, arguing that much of what makes up an undergraduate experience is not measurable.

Columnist Lucas Du argues that the academic advising office can greatly improve its services for students, primarily for first-years learning to navigate academics and college life.