What Does an Elected School Board Mean for Chicago? 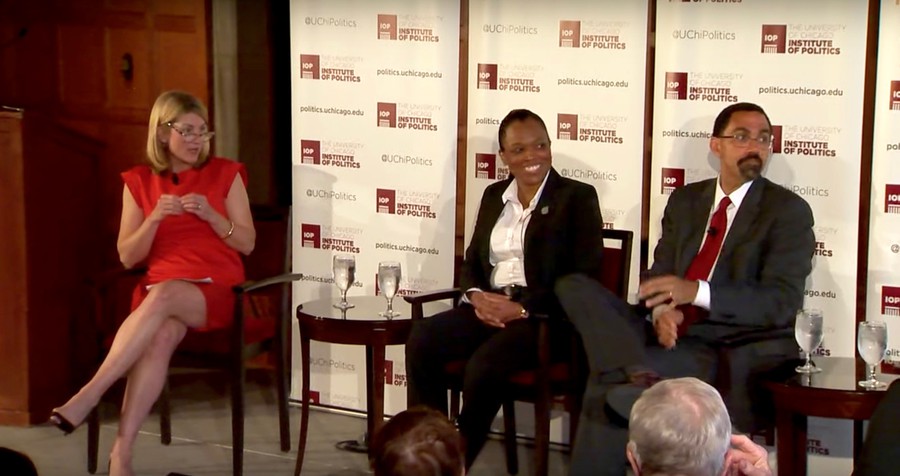 Chicagoans have been calling for an elected school board for decades, and it may soon become a reality as the state legislature is pushing for it now more so than ever before.

The Chicago Board of Education oversees an $8 billion budget. Members of the board, who are currently appointed by the mayor, have a say in district-wide school policies, employee actions, charter school openings, and spending decisions.

Under outgoing mayor Rahm Emanuel’s administration, the school board has enacted numerous unpopular education policies, including a wave of 50 school closures in 2013 that disproportionately affected minority students. These actions have sparked renewed calls for an elected school board.

In 2015, Chicagoans overwhelmingly voted in favor of a nonbinding referendum for elected school boards. A previous bill that would have created an elected school board in Chicago passed in the House and Senate in 2017 but was vetoed by former governor Bruce Rauner and subsequently failed to progress in the legislature.

Hyde Park politicians are among the many advocating for a new bill that is expected to pass with the support of Governor J.B. Pritzker. HB 2267, or the Elected Chicago School Board Bill, recently passed the Illinois House 110–2 and is currently being debated in the Senate. If the bill passes, the Chicago School Board, which consists of seven members appointed by the mayor, would expand to 20 members, each elected by residents of separate city districts.

The Complicated History of the Chicago School Board

The Chicago Board of Education was established in 1872 and at the time it was the only municipal school board in the state to be appointed by the mayor. This remained the case for almost a century until, amid financial troubles, the state-legislature established the Chicago School Finance Authority in 1980. The authority oversaw the financial situation of Chicago Public Schools (CPS), resulting in a loss of authority for the board.

However, as CPS’s troubles continued, a reform act passed in 1988 decentralized the way the Board of Education and CPS functioned. This decentralization act established local school councils that were given the power to approve school budgets, annual school improvement plans, and the selection of principals. At this time, 10 of the 15 members of the Board of Education were nominated by a commission of 23 parents and community members selected from local school councils, and five members were appointed by the mayor.

In 1995, however, this decentralization was reversed with the passage of the Chicago School Reform Amendatory Act in the Illinois legislature, pushed by then-mayor Richard M. Daley. The act preserved local school councils but eliminated the School Finance Authority and transferred almost all power over the Board of Education to the mayor of the city, who once again appointed all school board members. The act also shrunk the size of the board to seven members and replaced the superintendent of schools with a chief executive officer that could oversee the financial situation of CPS and make unilateral reform decisions.

Other school districts that have partial or fully mayor-appointed school boards include New York, Philadelphia, and Boston. However, none vest unilateral authority in the mayor’s office as Chicago does.

Elected school boards have been proposed in several cities nationwide, but experts disagree on the merits of such a plan. According to a paper by the Pew Trust that looked at Philadelphia, “There is no consensus among researchers about whether any particular form of school governance—including state takeovers, mayoral control, or elected local boards—leads to better student performance or fiscal management.”

At an event at the Institute of Politics, CPS CEO Janice Jackson seemed cautious about the efficacy of an elected school board.

“It’s not a silver bullet; it has to be done in a thoughtful way, and we have to get at what the ultimate goal is, which is more transparency and involvement from the community,” she said. Jackson also said that a push toward expensive campaigns would also undermine the benefits of an elected board. Expensive campaigns would increase bureaucracy and the influence of private interests.

The Recent Push for an Elected Board

Mayor Emanuel’s decision not to run for re-election indicated to residents and candidates a potential opportunity for change on Chicago’s school board. Emanuel made many changes to the school board and the school system at large during his tenure. When he first assumed office in 2011, he replaced all seven members of the school board. Booth professor Austan Goolsbee is one of the most recently appointed members of the board.

Candidates in the mayoral election largely agreed that at least some members of the school board needed to be elected, although some advocated for hybrid school boards with both elected and appointed members. The two runoff candidates, Toni Preckwinkle and Lori Lightfoot, both supported fully elected school boards.

However, Mayor-Elect Lightfoot has expressed concern over the size of the board that would be created under HB 2267. She said in an interview with WBEZ that “having a school board of 21 people is completely unwieldy. That will be a recipe for disaster and chaos. It’s way too large.”

If the bill is passed, it will go into effect in 2023, meaning that regardless of the bill’s fate, Lightfoot will be appointing board members for her own term. However, Lightfoot’s support will be critical if the bill is to become law.

Proponents argue that electing school board members will force them to be more accountable to city residents and less beholden to outside interests.

In a statement to The Maroon, Representative Tarver said he hoped “that elected individuals who are accountable to their constituencies will fight for the best interests of their constituents,” and that he “anticipate[d] that the school board members will also have a better understanding of the challenges faced by CPS and the difficulty in running a district of its size and magnitude.”

HB 2267 is currently being debated in the Senate and is expected to pass. Tarver said, “If I were a betting person, I would bet that [the bill] will pass.”

The article has been corrected to say that the Board of Education oversees an $8 billion budget. The article previously said $8 million.