"Across the Pond" and Its Extravagant Minimalism 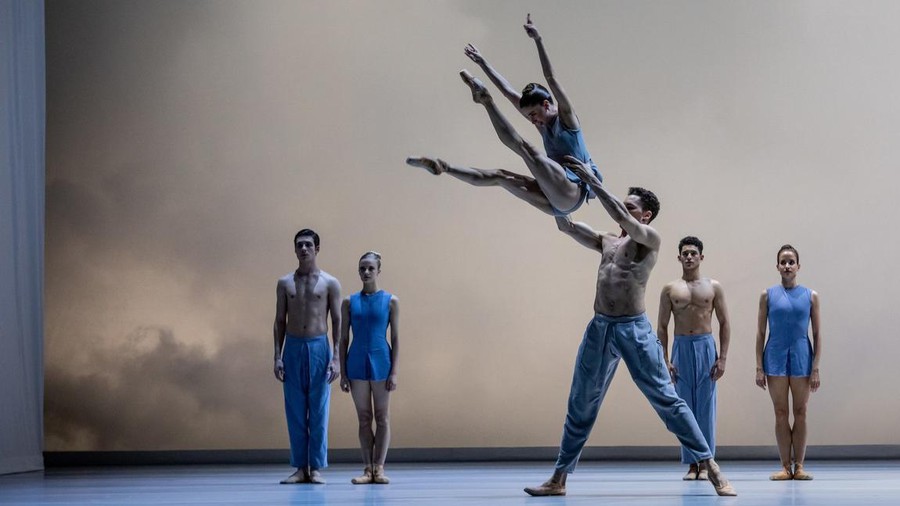 Rather than following a general plot-driven structure, "Across the Pond" steps away from a focus on storyline to exclusively shine a spotlight on the music and dance.

It’s difficult to stand out in the ballet world, but the Joffrey Ballet's Across the Pond elegantly manages this feat in a three-act medley of distinctly styled performances. Rather than following a general plot-driven structure, Across the Pond steps away from a focus on storyline to exclusively shine a spotlight on the music and dance. With this unique approach, the performance feels like a breath of fresh air that marks the definitive advent of the breezy Chicago spring.

Act I, called “Yonder Blue,” opened on a gentle blue box. With softly shining blue light, the simple set waited for dancers to bring it to life. Graceful arms and legs clothed in baby blue swayed to the music. The music came straight from the pit and serenaded the dancers. It was a symphony of soul as multiple intricate instrumental solos pierced the air and perfectly accompanied the dancers’ intricate movements.

With such a minimalist set, all eyes focused on the ballerinas. In their seemingly effortless movements, the performance didn’t betray the hours and hours of practice they must have put in to be so synchronized. The harmony of this teamwork was especially poignant because the full effect of the dance relied on perfect synchronization from the dancers. The ballerinas’ chemistry was most apparent during a striking pas de deux. The couple radiated sexual tension, and this tension being so strongly suggested, but never brought to conclusion, was delicious.

Act II, “Vespertine,” placed more emphasis on costumes and set, with distinctive purple dresses and chandeliers. The waves of the dresses took part in the choreography as ballerinas flung their outfits’ folds up and down to hide and uncover their faces. The mystery in this purple game of hide-and-seek also made its presence known in the music. The haunting music’s strong presence set the audience up for surprise at a suddenly muted section of the act. The silence was deafening as everyone in the audience collectively held their breath, anticipating the return of the music. For several minutes, all we could hear was the tip-tap of pointe shoes landing on the wooden stage. Perhaps this lack of music contributed to the emotional impact of the section because it continued to stick out in my mind long after the performance had concluded. There was something eerily calming about being denied access to an entire sense and having to rely only on my eyes to appreciate the performance.

The third act, “Home,” was extremely divorced from the tropes of traditional ballet, which is associated with classical music, traditional costumes, and graceful leaps. To start, the music was closer to electronic dance music. This caught me off guard and even stirred me to tap my feet along to the music’s defined beat. Ballerinas dressed in jeans and sneakers marched across the stage in synchrony, giving off a cult-like essence. Lights flashed across the stage in wild, disorienting patterns. Overall, the performance reminded me more of modern hip-hop and B-boying than traditional ballet. There was also no hint of the subtle suggestion and implication of the previous acts; rather, the message was clear and pronounced. I wasn’t sure if I enjoyed having a blatant thematic idea thrust at me, although this bluntness still marked a clear divide between the piece and classical ballet stories.

Overall, Across the Pond was a beautiful, well-choreographed ballet that invited its audience to find meaning in simplicity. It wowed in its lack of complex sets and subtle allure. It is difficult to walk away without feeling like you’ve had a rare flash of insight regarding the beauty of the human form through the complex emotions present throughout this striking performance.