With Their New Project, The National Shows That Optimism Is Easy to Find. 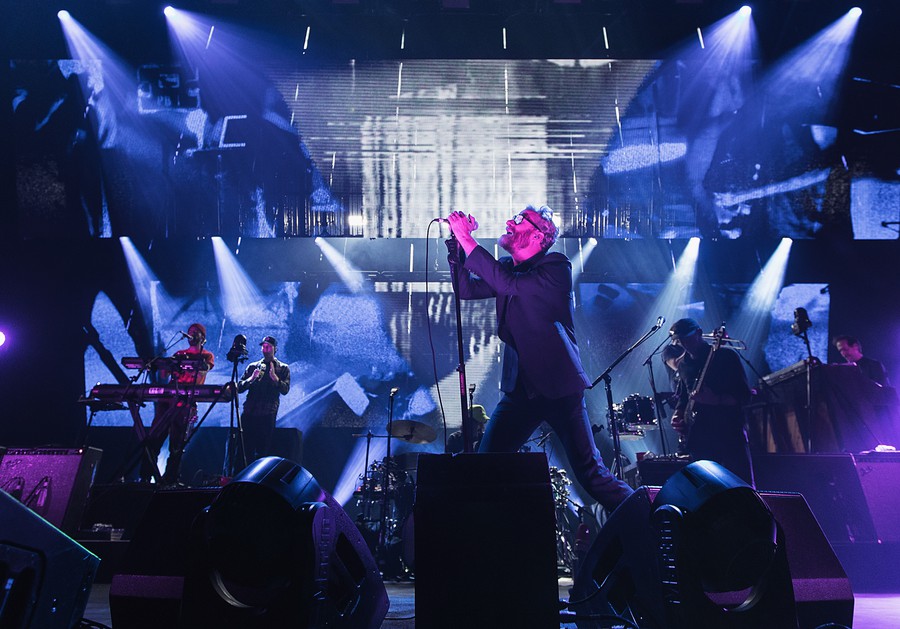 Many of the new songs invite more empathy and optimism for the tortured genius persona Berninger has occupied in previous records.

A film director meets a band. The band gives the director a cache of B-sides to work with. An actress visits the director. They shoot a short film together. After watching the film, the band writes a record.

Such are the unique circumstances that pervade The National’s eighth studio album, I Am Easy to Find, accompanied by a film of the same title directed by Mike Mills, both of which were played at Doc Films last Tuesday. The Grammy-winning alt-rockers are not in uncharted territory in releasing a film with their record—the Beatles did it, Kanye did it, and Beyoncé arguably perfected it in grandiose fashion with 2016’s Lemonade. However, no one has done it quite like this. Indeed, Mills is quick to dismiss the classification of visual album in the vein of Beyoncé, asserting that the record and film are "playfully hostile siblings that love to steal from each other.” Despite this—or perhaps because of it—the end-product is a giddying, pleasant surprise, an understated reaffirmation of life and love from a band often known for plumbing the darkest recesses of human neurosis in their music.

The film presents 164 captioned vignettes of a girl’s (Alicia Vikander) life, from infancy to death. Under Mike Mills’s directorial eye, the enormous venture of life—that bizarre, squirming thing—is dissected and flattened out. Subsequently, the project is marked throughout by a paradoxical yet successful impulse to provide a neat, orderly structure to something as wildly chaotic and unpredictable as human life. The poignant is forced to share the screen with the banal—fond memories of the protagonist’s first childhood friend are accorded the same importance as the submerged calamity of her parents slowly drifting apart from each other. Mills resists the temptation to present life through a nostalgic lens. In particular, the film’s characters represent the chaos and instability of life—in the space of a few beats, they fall in and out of love, they move to new homes while reminiscing about old ones, they pine, and they have affairs. In short, they come across as entirely, believably human.

Perhaps what is most striking about the film is how Mills suggests that everyone is doomed to repeat their parents’ mistakes. The film unfurls this quiet, generational tragedy to great effect—moments fold into patterns which mirror other patterns where you least expect them to. One of the most arresting scenes in the entire film is when the protagonist, approaching old age, sits alone on her couch, with a caption reading, “She wonders how she became this person, not others.” Yet, this daunting inevitability is inflected with moments of subtle beauty. The protagonist dances in an empty room at the start of the film. Toward its end, her mother does the same. I also found it particularly moving that the protagonist is always able to forge strong female friendships no matter what stage of life she is in. The film ultimately provides an optimistic take on life’s relentless tedium, suggesting that it is only through the cultivation of routine that one can make sense of the world around them.

Vikander plays the role of the protagonist from infancy to old age without makeup. It is a compelling directorial decision on Mills’s part—it almost seems as though Vikander is arrested in time and space while the world around her expires. It evokes one of The National’s most enduring thematic concerns: that of remaining in stasis amid the tumult of constant change. It is a risky stylistic choice, but Vikander pulls it off with verve. There is something thoroughly convincing about Vikander’s metamorphic performance, whether she is toddling around like an infant learning how to walk, or a world-weary woman weighed down by old age. All of this is supported by beautiful cinematography, rendered in soft black-and-white. It is this curious lens that forges a sense of intimacy, as though we are intruding into the characters’ personal space as we glimpse them at their most private and vulnerable.

Whereas the film is remarkable in its control and economy, the record comes across as a loose, sprawling endeavor. Given the record’s experimental genesis, perhaps this was to be expected. Indeed, I Am Easy to Find is probably all the better for it—The National is allowed to breathe throughout the record, riffing off on ideas and sounds that it has been toying around with for years. The glitchy, electronic soundscapes that were so successful in 2017’s Sleep Well Beast get extended runs in numerous instrumental tracks on the new record. Perhaps the record’s most significant production decision is how lead singer Matt Berninger, whose melancholy baritone anchors much of The National’s music, takes a side-step in many of the tracks. Berninger’s vocals are reduced to a murmur at points, moving in contrapuntal fashion with a litany of (predominantly) female collaborators, whose vocals are allowed to soar triumphantly in the mix. In particular, long-time David Bowie collaborator Gail Ann Dorsey adds a soulful, beautiful dimension to “You Had Your Soul with You”. It is also clear that Carin Besser—former fiction editor for The New Yorker and Berninger’s wife—shoulders a great deal of the record’s songwriting responsibility. Many of the new songs invite more empathy and optimism for the tortured genius persona Berninger has occupied in previous records. In that vein, my favorite line in the record is a Besser gem that comes from its titular track and is perhaps also the simplest: “I’m still standing in the same place where you left me standing./ I am easy to find.”

The record, as with everything else about this ambitious project, ultimately reflects an upward trajectory for The National on every account. This band has been around for 20 years and finally seems to be reaching a place where it can be absolutely comfortable with who it is and what it puts out.