"Yellow Face": Is It Merely Skin-Deep? 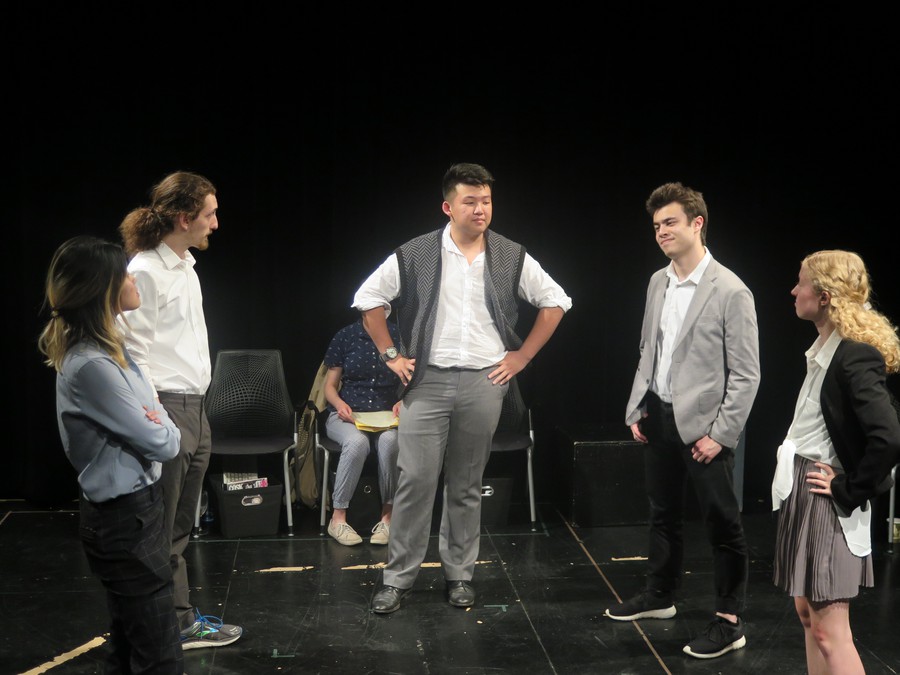 Emma Stone’s voice rang out from the audience at the 2019 Golden Globes as Sandra Oh spoke about the issue of Asian representation. Her sudden apology earned quite a few laughs, and all is forgiven for the most part. But her whitewashed role in Aloha is still relevant in a time of increasing demand for diversity in entertainment, in the workforce, and in academia.

For centuries, whitewashing has excluded people of color from opportunities in which they could have reached stardom. So, what is this form of discrimination? Should it define one’s career in the entertainment world? Does it even matter?

Enter Yellow Face, the unreliable memoir of playwright David Henry Hwang (DHH), directed by third-year Kenjiro Lee and performed last weekend at the Logan Center. One of the few Asian Americans in the theatre world in the 20th century, DHH (Emil Sohlberg) is confident, charming, and witty; he holds his chin high as he receives his Tony Award for M. Butterfly, a satirical take on the Orientalist opera Madama Butterfly. Directly after his Tony success, however, he publicly condemned the casting decision of Miss Saigon, criticizing the production’s willingness to select Jonathan Pryce, a white male, as the French-Vietnamese pimp and lead protagonist.

However, the press (Christine Yan, Brandon Zang, Zander Galluppi, Hope Gundlah) dog after him for his standpoint, as shown by reporters surrounding DHH, entrapping him in a circle, giving excuse after excuse for not finding the ideal Asian actor for Miss Saigon, and insult after insult about how DHH has turned one casting decision into a circus attraction that tarnishes the image of Broadway. They pummel DHH with biting remarks, stepping closer and closer until they have claustrophobically squeezed the playwright on center stage.

Although initially too intimidated to publicly advocate for Asian representation, DHH discusses with his whimsical father, who obsesses over American icons like Frank Sinatra, and decides to tackle this political issue in his next play: Face Value.

Yellow Face provides an interesting take on the political and racial divide that still torments the entertainment world: Rather than criticizing a white production crew for turning away gifted Asian candidates, this play focuses on the hypocritical standpoint of DHH himself as he denies his own principles of representation. Mistaking Marcus G. Dahlman (Jonathan White) to be a biracial actor, DHH enthusiastically hires him for the lead role of an Asian man in Face Value, only to later shockingly discover that Dahlman is a white man. Flustered and fearing his downfall in the Broadway community, DHH fumbles, panics, and conjures up a lie to disguise Dahlman’s identity. The cover-up is shady and discomforting, yet ironically hilarious in the given context: Dahlman is forced to take on an Asian-sounding name, Marcus Ghee, and a new identity as a Siberian Jew.

Although it is amusing to see DHH yelp out fake backstories for Marcus Ghee during conferences, and the confused yet quickly-catching-on Marcus Ghee complying and sharing heartbreaking anecdotes with an Asian-American audience (who were cleverly placed within the Logan audience to mimic an actual panel), the message strikes quite clear: DHH abandons his own morality, his own anger towards whitewashing, all to save his own skin. Even the best role models succumb to the dread of being ridiculed in the media, and Sohlberg impressively shows this anxiety, masked by smiles and nervous chuckles, while a perplexed White stutters out his responses to the audience’s questions. DHH’s willingness to endanger Marcus Dahlman’s legal identity shows just how strong the playwright’s desire for recognition is—for another chance to achieve his next M. Butterfly. Even after he fires Dahlman under vague conditions, while the underlying reason was his ethnicity, DHH shoulders this guilt and lashes out at Marcus, who gains popularity within the Asian community with his acclaimed role in The King and I. Sohlberg depicts a weary DHH grappling with the failure of Face Value—a man who, rather than moving on from the huge mistake, deludes himself into affirming that he was the one who created Marcus Ghee, and that he deserves the credit for boosting Marcus into stardom. .

The complex relationships between characters in Yellow Face are humorous and yet unflinchingly raw. They blend compellingly into the overarching theme of identity, especially what it means to “show face.” Leah Anne Cho (Christine Yan) falls in love with Marcus Ghee, and we feel her anguish, hurt, and rage as she coldly stares at Marcus before brushing him aside when the government exposes his true ethnicity. We wince at DHH’s embarrassment as he buries his face in his hands and confesses his hypocrisy, narcissistically asking his father and his colleagues if, despite all he has done, he is still a role model for the Asian community. Identity is used as a means of deception, of self-indulgence, of discrimination, or of inclusion—and, later in DHH’s case, of redemption—and the TAPS cast wonderfully showcases the good, the bad, and the ugly of such defining constructs.

But the most touching story lies in the shadows: The near-impossibility of the American Dream for Asian immigrants, suffocated by the anti-Asian witch hunt, the yellow peril, and a government which questions their loyalty to the U.S. Henry Y. Hwang, or HYH, (Brandon Zang) frames a comical yet depressing characterization of the racist undertones of the U.S. government. Zang particularly shines as a lighthearted HYH who agonizingly allows his confidence and quirkiness to fade as the government assumes his Chinese identity to immediately correlate with unwavering allegiance to the Republic of China. As a former believer in the achievability of the American Dream, he wistfully speaks of Frank Sinatra, asserting that America is a fantastical land in which anyone can become anything…and we want to support his optimism as Zang looks hopefully into the audience, as if for encouragement. A self-made immigrant banker who built himself up from nothing, he clings onto the faith that America brims with benevolence…until he has to confront the harsh truth that his old dream has crumbled in the face of the same racism that has brewed paranoia around Chinese global power—the same racism that hunted down nuclear scientist Wen Ho Lee (Brandon Zang).

All in all, the TAPS performance was an impressive portrayal of the gripping battle of embracing and rejecting identity, of illuminating the uproar over a whitewashed entertainment empire, and of the irrational fear of lost allegiance in the Asian community. The cast teases DHH’s self-absorption, yet peppers in the right amount of remorse to evoke empathy for him. It leaves us thinking about what identity really means, if it really can define or ruin a person, and what happens when stereotypes are pushed too far. The cast of Yellow Face triumphs at weaving in comic relief with harsh social criticism, exploring cultural authenticity from multiple perspectives, whether a person is white, Asian, or a Siberian Jew, and I applaud them for their daring performance.