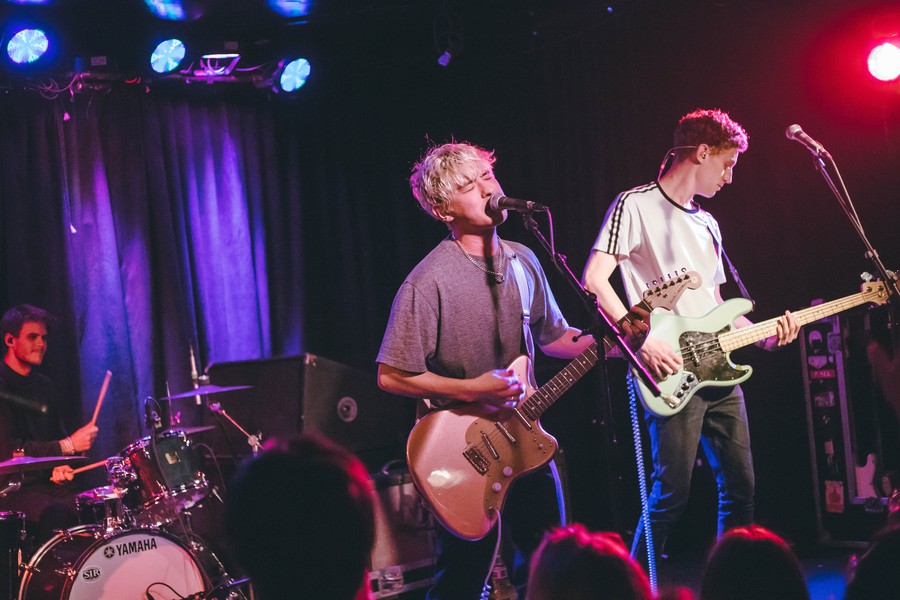 Last Dinosaurs, comprising (from left to right) Dan Koyama, Sean Caskey, and Michael Sloane, at the Beat Kitchen on the 9th of May.

On May 9, French Police opened for Last Dinosaurs like dessert being served before the entrée. In fact, their sound resembled the music that I had queued for the picturesque windows-down Uber ride home along Lake Shore Drive. The set had a cool timbre: a steady drum pattern and flowing texture that left me feeling like I was savoring a drop of lemon mint sorbet on my tongue. French Police’s sound fills you from head to toe, each song connected by a long, smooth, loosely fastened silk rope of intertwined melodic whispers and the yearning beckons of a strum from a chorus guitar pedal.

Just picture your quintessential indie teen band. “My 15-year-old self would have been all over this,” I thought to myself, and it’s likely many others in the crowd did the same. The lead singer, Brian Flores, refused to make eye contact with the audience for most of the performance, which I found to be a bit cliché.

Quite fittingly, Flores was dressed head-to-toe in hipster boy chic: a thrifted red shirt and ultra-tight skinny jeans, with tortoise-shell frames to match. The audience of ironically enthusiastic beanie-clad sad boys ate it right up. Flores captured their hearts, crooning into the mic in the sedating and aloof tone we all long for deep down. As a result, the lyrics were entirely unintelligible, although that isn’t really so pressing of a problem in the indie pop genre. Surprisingly, the audience still managed to sing along. The keyboardist was similarly detached, casually rocking back and forth while performing. The drummer, Kevin Peralta, was a particular crowd favorite, being asked repeatedly to take his shirt off (to which he sheepishly declined).

The song “Mi Cama” was a refreshing addition to their set, indicative of the budding Latinx indie scene. Latinx indie is coming, people. And as a Venezolana, I am very much here for it. However, please enunciate our beautiful language properly, Flores.

After such a mellow opener, Last Dinosaurs burst onto the stage with energy and colored lighting that I couldn’t have possibly anticipated. The group looked as if it had been started by two varsity soccer players, a brooding existentialist with parents in academia, and an enthusiastic music nerd, all walking into the same high school practice room. Their aesthetic wasn’t necessarily cohesive, but their sound was able to overcome that.

Sean Caskey had refreshingly clear vocals that matched the groovy progressions of the bass, played by Michael Sloane, as well as the pumping percussion of Dan Koyama, giving the group an extra-danceable oomph. One could characterize their sound as a cross between Foster the People and Grouplove, but with the willingness to experiment beyond the indie rock genre. They mixed in strains of punk and ’80s synth pop, some psychedelic ornaments, and occasional Latin rhythms.

It was the little moments in their performance that struck me the most. I really appreciated the subtle jingles on the lead up to the final chorus of “Time & Place.” Furthermore, Lachlan Caskey snuck a cute little guitar solo into “Sunday Night” with an exhilarating slide to top it off. I only wished he would have engaged the audience a bit more; his musicality could have been further amplified by appearing more invested. I understand, however, that indie boy detachment is an aesthetic, and he was dressed the best of all the members (great pants and jewelry), so I will give him a pass for the night.

There were many notable quotes. The cry for the removal of clothing resurfaced, to which Caskey respectfully declined, but not without a cheeky fake lifting up of his shirt. This band definitely doesn’t refrain from euphemisms, making bold statements like “You broke our Chicago virginity, you broke it hard” and “We will spray you with punk juice.” Although I personally wasn’t sure what to make of that, the audience appeared to be electrified by such comments.

Overall, the audience was very entertained to the point that the floors of the small venue were bouncing with the magnitude of a 6.0 earthquake, which I can say is the most you can really hope for in a genre that can sometimes feel quite generic. I appreciated these three hours of high school nostalgia and relished in my teen-movie car ride on the way home, with pleasant reflections on the night of freeing indie rock melodies.