Running at the Chicago Shakespeare Theater on Navy Pier until June 9, director Barbara Gaines’s Hamlet does not shy away from providing answers. 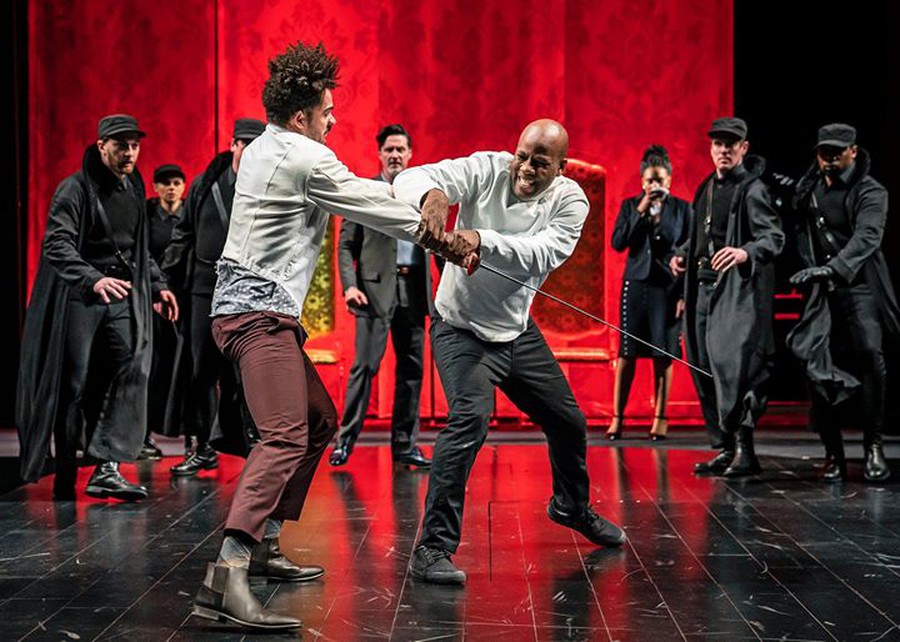 Hamlet (Maurice Jones) and Laertes (Paul Deo, Jr.) duke it out in the climactic finale of Chicago Shakespeare Theater's production of HAMLET, directed by Barbara Gaines.

The plot of Hamlet is, on the surface, fairly simple. And director Barbara Gaines’s interpretation, running at the Chicago Shakespeare Theater on Navy Pier until June 9, does not try to complicate it.

However, it soon transpires that nothing really is that simple, or classic, about Hamlet, and that “to be, or not to be” is not, in fact, “the [only] question”—there are many.

The play even begins with one: “Who’s there?” This sets the tone for the rest of Hamlet, in which smaller plot-lines, larger themes, and character motives are left ambiguous.

Uncertainties run all throughout the play: Is Hamlet truly mad? Is the ghost of his father real or imagined? Is what the ghost tells him about the murder true? And, even worse, is his mother Gertrude in cahoots with his evil uncle Claudius? (And, bonus: Does Hamlet really love Ophelia?)

Despite all of this uncertainty, Gaines provides a straightforward production of Hamlet that does not shy away from providing answers. According to Gaines, Hamlet is not really mad, the ghost is real, and Gertrude is not in cahoots. (And Hamlet maybe loves Ophelia.)

Gaines, who has directed Hamlet once before over 20 years ago, takes a clear view of the play through the lens of Hamlet’s grief, viewing it in light of her personal experience with her own father’s sudden death. She dispenses with the two popular opposing views of Hamlet’s madness: as either complete truth, or an elaborate plot to get his uncle Claudius to confess his murderous crime. Instead, Gaines believes that “we all experience moments of madness,” and that all of Hamlet’s “mad” actions are simply him responding to his pain impulsively.

This clear-cut reading, while at points coming across as perhaps slightly too sensible by brushing aside the important questions, provides a solid framework for the cast to show off their acting abilities and skillful handling of Shakespearean verse.

Jones plays a Hamlet whose grief is palpable but does not overwhelm. Unlike other productions, this one indulges in fewer anguished moments of isolation: In contrast to David Tennant’s dark, dramatic soliloquies, in which he performs in a zoomed-in silhouette and a T-shirt, Jones’s silhouettes do not stand out. We are given more time with a Hamlet who light-heartedly swans around in his feather-lined dressing gown, taunting Ophelia’s father Polonius.

Despite this lack of overt isolation and anguish, however, Jones ultimately presents Hamlet as a figure who is very much alone. His solitude is augmented by his physical distance from the rest of the characters: Even Hamlet’s friend Horatio, played by Sean Allan Krill, sits away from Hamlet at the end of the play, watching his best friend die with his hand over his mouth.

In the Chicago Shakespeare Company’s production, Hamlet’s relationship with his mother is almost disappointingly uncomplicated. Gaines chooses not to dip into the various Oedipus complexities put forward by Freud. Instead, Hamlet is—at least on the surface—just a son who is furious with his mother for marrying his uncle so soon after his father’s death. Gertrude, similarly, is just a love-struck newlywed who seems to have played no part in her late husband’s murder by Hamlet’s uncle (and her new husband) Claudius. Moreover, like all conventional Gertrudes, she says little, and is defined by her interactions with both Hamlet and Claudius, expressing occasional (but apparently sincere) concern over the former, and mooning over the latter.

As a result, there is a strange line at the end that does not sit well with this portrayal. When Gertrude drinks the poisoned cup that Claudius has secretly prepared for Hamlet, a nervous Claudius tells Gertrude not to drink, and Gertrude, in uncharacteristic defiance, replies, “I will, my lord, I pray you pardon me.” While this production’s Gertrude plays up this mysterious defiance, her delivery clashes with the play’s hitherto naïve Gertrude.

Hamlet’s relationship with his love interest Ophelia is more intentionally ambiguous. This is partly due to the fact that we don’t know much about how Hamlet truly feels about Ophelia: They never have a moment alone together in the play. However, when they do interact, Jones and Nicks provide a heart-wrenching performance. Ophelia’s grief at Hamlet’s madness almost dominates Hamlet’s own misery. Gaines is again clear about Ophelia as a character: “Her life has been ruled by men…so when the men in her life leave her, she implodes in on herself.” Nicks avoids portraying Ophelia as completely innocent, instead providing a more realistic presentation of an Ophelia who is aware of the fallibility of the men around her, but is unable to escape this framework because she has not experienced anything else.

Despite this overriding sense of tragedy, the play’s modern take on Hamlet is a source of comedy and vitality. This could be found in details such as the disco music before King Claudius’s celebratory toast, the oddly appropriate gum-chewing from Hamlet’s university pal and court sycophant extraordinaire Guildenstern (or possibly Rosencrantz?), played by Samuel Taylor (or Alex Goodrich), and the tattooed bikers who make up the royal court actors.

This modernity and the fluency with which the actors recite their lines contributes to Gaines’s aim to “pare everything down to the point where it feels authentic.” It also shows that the broader questions of the play, including “what happens after death?” and “are we all in love with our mothers?” are still very much applicable to today.