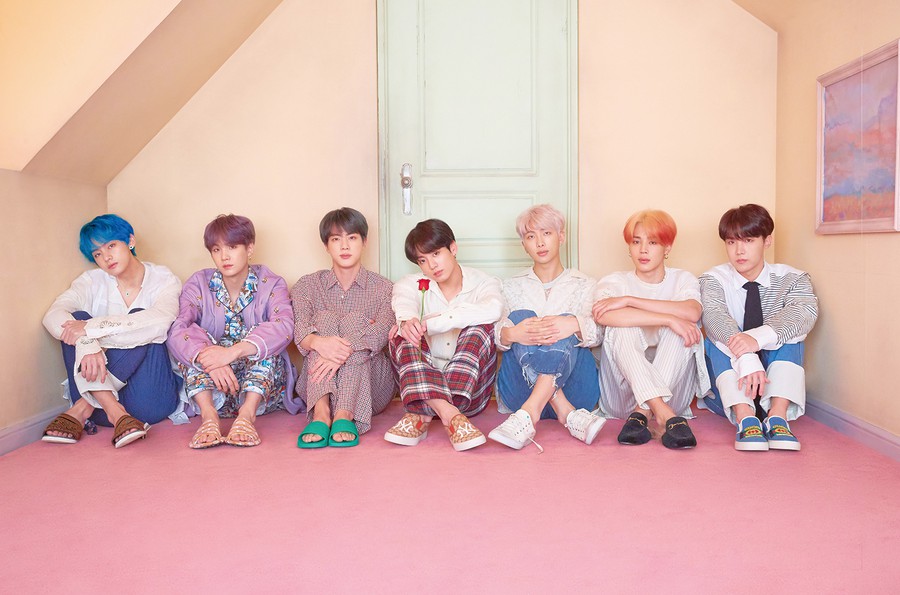 From their humble beginnings, the members of BTS have reached global fame through not only their upbeat music, but also their powerful message of never giving up.

The seven-member K-pop group BTS has been dubbed the Beatles of this generation. From its humble beginnings to its current global stardom, it’s not hard to see where the comparison is drawn from. As it breaks social media records left and right on an almost weekly basis, and sells out stadiums on its U.S. tour, BTS boasts a global presence that cannot be overlooked.

BTS’s recent stop in Chicago’s Soldier Field Stadium testified to its star power, with pure adoration radiating from its ARMY (the official name of BTS fans) of a fanbase. Even before the concert started, the international crowd of all different backgrounds wowed me. An entire stadium’s worth of people had voluntarily gathered in windy and rainy Chicago for a band that sang in a language most of them didn’t even understand.

The concert was structured to heighten the emphasis on each individual band member. In the BTS family dynamic, little jealousies and pettiness are replaced by hopes for one another’s success, and that is the highlight of the team. Starting from personal introductions and solo performances, to equally timed ending comments, there was none of the fights for attention or power imbalances that sometimes sully the interactions of other groups.

In fact, the members are so different that there is little room for comparison. Jimin’s graceful classical dancing and crinkled smile characterize him as much as V’s cartoonish personality and dramatic flair represent him. The energy that everlastingly-enthusiastic J-Hope specifically brings out of ARMYs, matches the goofiness and easy-going dad-humor that the handsome Jin brings to the mix. The sarcastically calm and dry wit of Suga complements the crazy excitement and raw energy that Jungkook radiates. Last but not least, RM is both the leader and lifeline of the group who juggles his roles as its translator, spokesperson, and rapper. And still, the audience had enough love to spare for all the members: we approached a couple of sentimental moments in the concert as J-Hope took off his earpiece to listen in awe at the stadium shouting his name, and both V and Jimin grew too embarrassed to deliver their prepared English thank-you speeches.

These simple actions betray a straightforward but rare character trait that BTS brings to its international fanbase: the ability to be surprised and moved by a cheering crowd, or to correct one’s English and apologize for it, embodies a humility that BTS has never lost. For a group that really has overcome all the obstacles of a small company name, a harsh debut, and years of relative anonymity, success is something it doesn’t take for granted. While the theme of hard work is ever-present in their attitudes and concerts, it is never tinged with arrogance. Instead, humility inspires its constant appreciation for ARMYs that is almost tangible in the concert’s atmosphere. The sincerity of each solo performance, plus the wave of collective energy, emanates in a way that a viewer can’t help but appreciate the complicated foot work, the running through the rain, and the shivering through the cold.

Along with its work ethic, another significant factor in BTS’s continuing success is its meaningful lyrics. The band is well-known for refraining from singing only about relationships and love. Again, individuality pops up as ARMYs recognize the pain and loss from each member’s personal lives within the lyrics. Ranging from depression, failing to live up to other people’s expectations, insecurities, and lost childhoods, BTS songs tackle a range of social problems, making them songs to listen to when one is lost in life and needs a voice rather than merely catchy melodies. BTS gives an honest and personal voice to depression, social anxiety, being lost, and self-love, which comes at the right time for a generation so prone to such mental qualms.

That being said, merely sending the right message at the right time wouldn’t have been enough if the group hadn’t been prepared. In this sense, we see that life is a matter of circumstance and one has to work hard to be ready to take advantage of a given opportunity. When the chance came for BTS, it was there—ready and excited for the challenge. And here it is today: the Beatles of the 21st century, whose return to Chicago we eagerly await.