The Wind Blew Me Away, but Aminé and Co. Reeled Me Back in 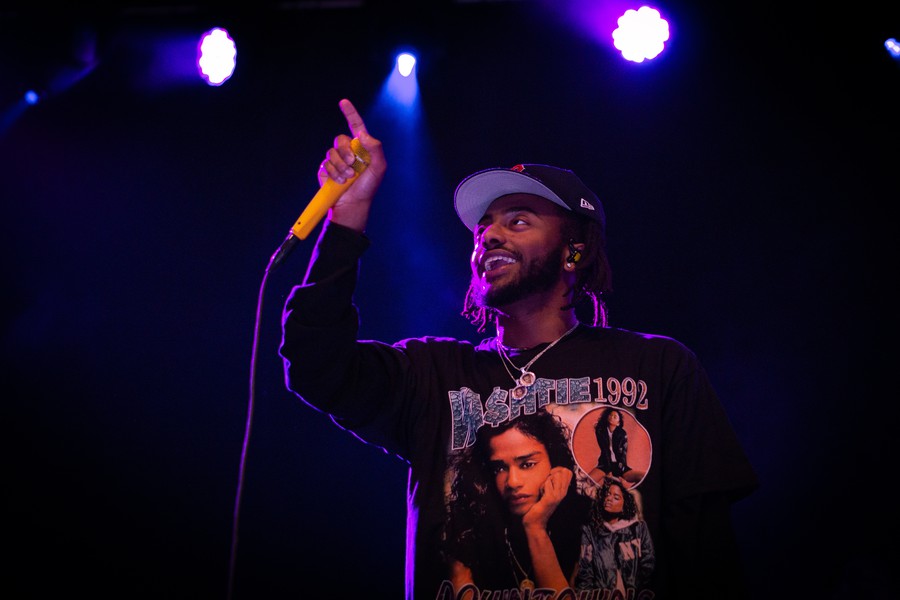 Aminé concluded the night with hits "REDMERCEDES," "WHY?" and "Caroline."

You know, the day started off nice. It was 79 degrees, sun was out, wind was but a gentle breeze. We pied my RA in the face, were flung off the bull after seven seconds, and got a piece of frozen custard or two at the carnival. But (thanks Weather Gods) we had to flee in our flip flops back across Midway for sanctuary against that rainstorm. Really appreciated that—truly.

It’s upsetting that the rain pushed everything back, but I guess I still felt the hype when Hutch started to tremble from the bass booming pre-concert in the Courtyard. (Huge shout-out to MAB for powering through that weather nonsense and still managing to put on a show outside.) An odd start to Summer Breeze this year, and therefore, I present an odd article to accompany it. (Summer Breeze tradition, I guess.)

Before the smell of weed could fully permeate the air—heck, before I even reached the Courtyard—Allie X was already performing. I’m not going to lie: her musical versatility was impressive, especially for a soprano. She transitioned smoothly from chest to head voice, her warm lower octaves making way for her resonant high-register belts. And despite the small audience that was still trickling in, she rocked the stage, whipping her hair hard enough to knock her sunglasses off her face, jamming out on her keyboard to her synth-pop music, or just waving to UChicago students close to the stage. Performing her hits “Bitch” and “Sunflower,” she looked like she was having a blast, even if it meant singing to a crowd of no more than perhaps 100 people.

“You guys are the most enthusiastic audience I’ve ever had who don’t know my songs!” the singer-songwriter joked in a humorously deadpan voice, to the cheers and drunken hoots from students who had just staggered in from darties.

Due to time constraints, Allie X was unceremoniously forced to leave the stage halfway through her run, after some technical difficulties with her synth and a meager total of one track from her latest album, Super Sunset (2018). Nonetheless, she crooned out her airy, romantic “Science” with unwavering, sultry confidence and precise vocal control while striking her keyboard, reflecting her talent in lyricism, before remarking, “Sorry, they’re kicking me off stage now. Bye, guys.”

No, Allie. We’re sorry for the disastrous weather, and we’re really sorry that we didn’t get the timing right down to a science in the way we would have loved. But thank you for your wonderful sound that offered something different from generic pop—your talent is undeniable, and you deserve a bigger audience and less shitty rainstorms.

Becky G performed next in her first campus performance ever. Her energy and shattering stage presence immediately captivated the exponentially growing audience, with smash hits like “Mayores” triggering a call-and-response between her and the audience (even if the majority of us couldn’t reach the highest register of her vocal range), and “Cuando Te Besé” getting the crowd swaying, dancing, and clapping along. With her relentless brilliance, bubbly personality, and mischievous smile, she twerked during her hit “Booty” and playfully twirled with her backup dancers for “Sin Pijama.” Her delicate, nasally, yet firm voice matched marvelously with her reggaeton/Latin music, and her dancing amplified the vivacity and spirit of her set. Midway through, she briefly left the stage, shining the spotlight on her four dancers. Freestyling to songs like “Thotiana” and “Mo Bamba,” the dancers riled up the crowd to wild levels as they spun and strutted across the stage, just in time for Becky to return with “Pienso en Ti.”

In strictly my opinion, she was the star of the night, riveting her audience with her sweet vocal timbre, upbeat melodies, and catchy rhythm—although many of us do not speak Spanish, Becky G nailed her performance with a fiery momentum from which her charisma, exultation, and charm radiated, and we felt that with matching vigor. So, props to you, Becky G, for being the musical powerhouse that you are. Keep doing what you do.

Headliner Aminé burst out onto the stage just as the sun set on Hutch Courtyard, spitting line after line of rhymes, and some fans screamed in adoration as he greeted them with a sheepish smile. Blasting bass-heavy renditions of hits “REEL IT IN,” “BLACKJACK,” “WHY?,” and “REDMERCEDES,” Aminé poured out indefatigable enthusiasm…which is fantastic and adrenalizing on its own, but slightly flustering when his audience couldn’t match that wavelength. Perhaps it’s because we didn’t know all his lyrics, or the acoustics weren’t exactly the greatest, or people were just flat-out exhausted and running on zero fuel at this point—but some songs simply just fell flat because we couldn’t reciprocate Aminé’s exhilaration. (That seems to be a motif at this Summer Breeze. Sorry, Aminé.) He even called out a student in the crowd for knowing only “some of the lyrics and just standing there, lookin’ real bored,” later joking, “You guys are college kids, right? So y’all are intelligent unlike Shawty over there.”

Nevertheless, Aminé gained the loudest cheers of the night with his soft mumbling in “Caroline,” only rivaled by the crowd roars for “Spice Girl.” For comical effect, he even threw in a small sample of “Wannabe” by the Spice Girls in the latter song, which earned peals of laughter, spontaneous dancing, and rallying clamor. Overall, you fucking nailed it, Aminé. For an audience that didn’t widely recognize your name, you captivated, you conquered, and you gained at least one new fan (but probably more).

Summer Breeze came with its ups and downs, as all concerts do. But past that dumpster fire garbage of an unpredicted thunderstorm, the shy and semi-responsive audience, and increasing fatigue, the three artists brought with them a fun and electrifying show. Sure, there’s a lot that could have been improved, but to hell with that thought. MAB pulled off a successful night, and I’m grateful to have seen the diverse musical culture that radiated from the stage.