Florence and the Machine and Its Not-So-Useless Magic 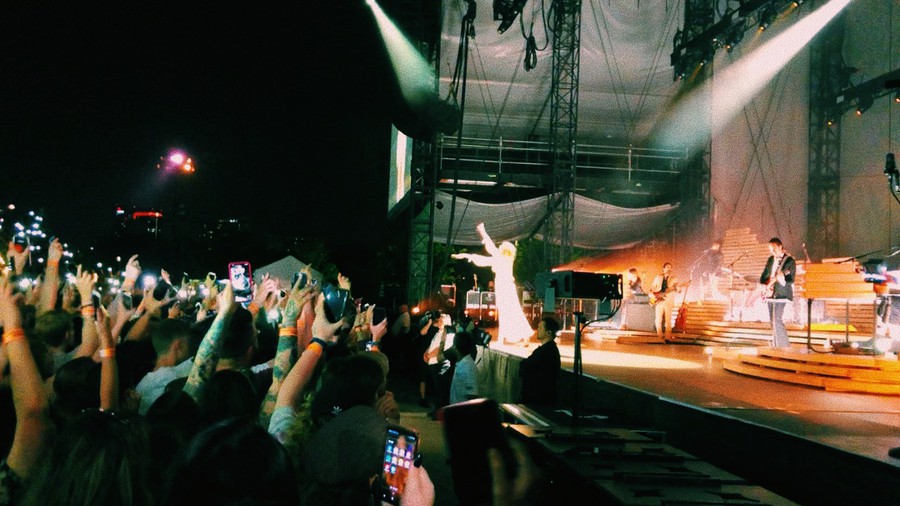 Last Thursday, Chicago was graced by art-rock band Florence and the Machine for the second time in less than a year as part of the group’s High as Hope Tour. The concert was opened by Blood Orange and held outdoors at Huntington Bank Pavilion, as opposed to inside the United Center like the previous show. While differing from the first show in venue and featuring a few different songs, the performance did not veer from the band’s essential values of catharsis, collectivity, thankfulness, and the empowerment of women.

Arriving early onsite, I overheard several people admitting to their obliviousness to the opener, Blood Orange, expressing at best curiosity and at worst remiss. However, almost immediately after seizing the stage, lead singer, composer, and songwriter Devonté Hynes and his entourage proved themselves worth showing up early for. Coalescing electronics, R & B, and gospel into a set teeming with energy and poetry, the ensemble performed hits like “Jewelry” and “Hope,” with Hynes shifting from piano to guitar as often and as quickly as Jason Arce alternated between bass clarinet, saxophone, and flute. Ian Isiah and Eva Tolkin may initially have played the roles of backup vocalists, but they acted nothing like it, jiving downstage with Hynes and serving chilling lead vocals as well. Inspired by Detroit-based gospel group the Clark Sisters, Isiah performed a penetrating rendition of “Holy Will.” Suffice it to say, if there had been a lack of interest from the crowd initially, heads were now turned to the stage, phones up and recording the spectacle.

Later, during the headliner’s act, priestess of baroque pop Florence Welch explained that she and Hynes were long-time friends and collaborators—before either had achieved international fame, they had been in a band called Team Perfect which covered the whole of Green Day’s 1997 album, Nimrod. “Welcome to the Team Perfect reunion tour,” she joked. Having Blood Orange open for the band set a noticeably different tone than having Perfume Genius open, as in October. The two musicians share the same origins, but took two different paths which gave them disparate and yet complementary sounds.

There were two recently released additions to Florence and the Machine’s setlist. The first of these, “Moderation,” is an invigorating and defiant anthem that was put out as a B-side to 2018’s High as Hope. With a similarly gospel-inspired sound to “Lover to Lover” off 2011’s Ceremonials, the song recalls a childhood experience of being told off in church for being too forward. The song takes the self-destructiveness of “Ship to Wreck”—the second single off of 2015’s How Big, How Blue, How Beautiful (HBHBHB)—and strips it of the guilt. Performed back to back, the narrative transitioned from the questioning in “Did I build this ship to wreck?” to a relenting but incendiary “I’ve never made it with moderation.” The second song added to the setlist was “Jenny of Oldstones,” which was commissioned for the eighth and final season of Game of Thrones. “This is dedicated to Arya Stark,” Welch prefaced before crooning the seemingly centuries-old ballad. Funnily enough, Welch has purportedly never watched the hit series.

Welch dominated the stage with aplomb appropriate for someone who had been performing live for more than a decade. Gone were her days of drunkenly crawling under the stage, climbing the set’s scaffolding in high heels, and pouncing straight into an ankle injury. Though barefoot, the vocalist glided with the grace of a gust of spring air and flings her limbs about as if in ritual dance. In fact, there is always something ritualistic about a Florence and the Machine concert: Spirits are invoked, demons are exorcised, and something powerful and visceral emerges in their place. In this venue in particular, only a few streetlights between you and the stars, with dragonflies soaring and the lip of the horizon one kiss away from taking you forever, something magical manifested. When performed live, everything in Welch’s book of purportedly Useless Magic published in July 2018—all the lyrics and poetry, the prophecies and spells, the paintings and prayers—come to life.

That said, it was easy to lose oneself in the fantasy of it all, be it in the swelling string section on “Queen of Peace” or in the contagious choler of “What Kind of Man.” Especially at the October show, comfortably confined by the walls of the United Center, fans were quick to be captured by the Dionysian reverie of Welch’s mystic lyricism and the Machine’s ethereal instrumentation. Yet, the poet herself was quick to ground the experience in reality. At the previous concert, which was held right around the midterm elections, she urged attendees to vote, insisting that “hope is an action”—a speech she gave in various cities on the North American leg of the tour. Last Thursday, she alluded to the wave of abortion bans threatening women’s rights in America, pleading viewers who were thinking of buying merchandise after the show to instead donate their money to the American Civil Liberties Union, a nationwide organization that works to change policy and legislation that infringe upon people’s constitutional rights.

“And I have to say,” Welch added while introducing the song “Patricia,” “and I feel this so deeply and in the core of my being that, American women, you deserve better!” The track, from High as Hope, takes its title from punk poet laureate Patti Smith, to whom it was dedicated. “Are you a real man?” sang Welch, casting a malediction against toxic masculinity, “Well, how’s that working out for you, honey? Do you feel loved?” Despite the mood change caused by the following few songs, including the jovial 10-year-old “Dog Days Are Over,” the trope was revisited in the brassy “100 Years,” in which the “women raged as old men fumbled and cried.” Indeed, after having drawn from certain masculine ideals musically and aesthetically during the HBHBHB era, Welch turned more sincerely inward in High as Hope, finding more power in her femininity. She shared that power with her fans—and they share it back.

Welch also underscored togetherness as crucial to the experience. “Are we all connected?” she yelled at one point, after asking audience members to join hands. “We’re trying to have a collective experience,” she chirped after demanding that people put away their phones. As per tradition, she also asked everyone to “embrace each other! Tell each other that you love each other!”

Wrapping the show up with “Shake It Out,” another Ceremonials hit, the show was cathartic to say the least. “I transcended,” one concertgoer confided. The group proves time and again that, despite all the evil and anxiety and adversity in the world, love permeates and conquers “on some cosmic level,” and it is refreshing to feel, even if only for a few hours, that we are all, as Welch said, one.