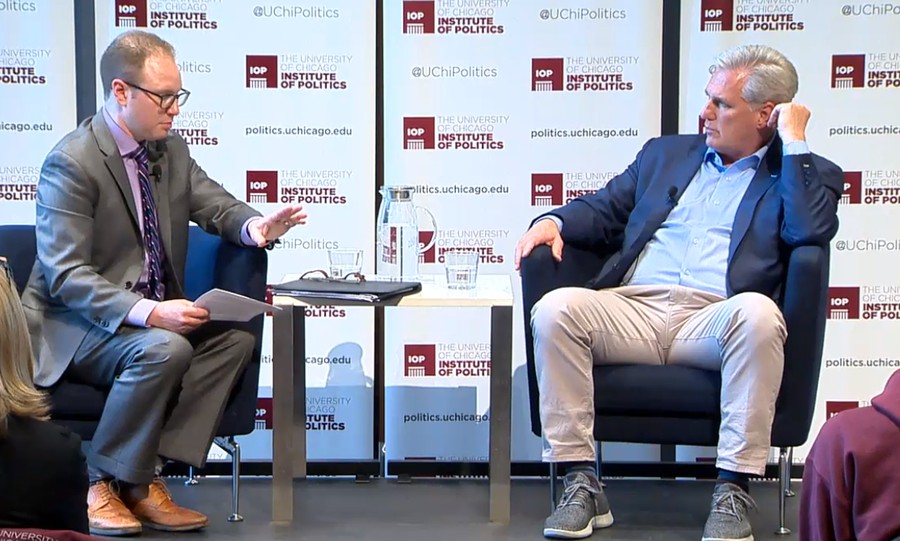 House Minority Leader Kevin McCarthy (R-CA), who was elected in November last year to succeed Paul Ryan as the leader of the House Republicans, assessed the Republicans’ 2018 midterm losses and offered insight into 2020 at an Institute of Politics event last Friday.

McCarthy spoke with David Wasserman, House editor for The Cook Political Report, at the Logan Center for the Arts. McCarthy attributed Republicans’ 40-seat House loss in the 2018 midterms to retirements on the Republican side (41 members), the improved quality of Democratic candidates, and redistricting, particularly in Pennsylvania. He also emphasized the oscillating nature of elections, saying that “the party in power would on average lose 30 seats.”

McCarthy asserted that, although Republicans were successful in immigration and economic policy in the midterms, they saw major losses in healthcare in blocking protections for preexisting conditions, a topic that Democrats overwhelmingly focused on.

“Had we not lost [on healthcare], the outcome would have been different,” McCarthy said. “The way I look at it, there’s room for improvement.”

Despite the loss in 2018, McCarthy stressed the economic improvements he claims have been ushered in by President Donald Trump, who he has long supported, even as Trump has divided the Republican base.

“I look [at it] from a perspective that [though] we didn’t do everything we wanted to do. You’re [students] graduating in the best economy in 50 years,” McCarthy said.

“What you should see is that this is not unusual; what’s unusual is the timing,” McCarthy said. “I think the question is are they trying to relitigate something that’s already been done.”

McCarthy also discussed his position on abortion. In the wake of recently introduced state laws almost completely restricting abortion—which have prompted debate nationwide and on campus regarding the use of funds for abortion services—McCarthy reaffirmed his stance that abortion should be illegal with the exceptions of rape, incest, and preserving the life of the mother. In response to a question from a first-year student that referenced last week’s controversial abortion Student Government vote, McCarthy maintained that, although his position diverges from the Alabama law in that it includes exceptions, taxpayer funds should not be allocated to abortion services.

Wasserman also pressed McCarthy on his 2020 election predictions in an increasingly crowded Democratic field; McCarthy responded by focusing on the context of the election.

“You look at the time and place of where we are: That matters a lot,” he said.

McCarthy mentioned the loss of the first round of superdelegates and changing election rules as significant factors in informing election results. Referring to a September 2018 DNC vote that left superdelegates with substantially less voting power—which could in turn allow for greater support for non-establishment candidates like Bernie Sanders—McCarthy predicted the success of Sanders over current front-runner Joe Biden.

“It’s still early, and any advice someone gives you now—they’re totally wrong, because at any given moment someone could become the nominee,” McCarthy said. He noted that Trump had yet to announce his candidacy at this point in the race in 2015.