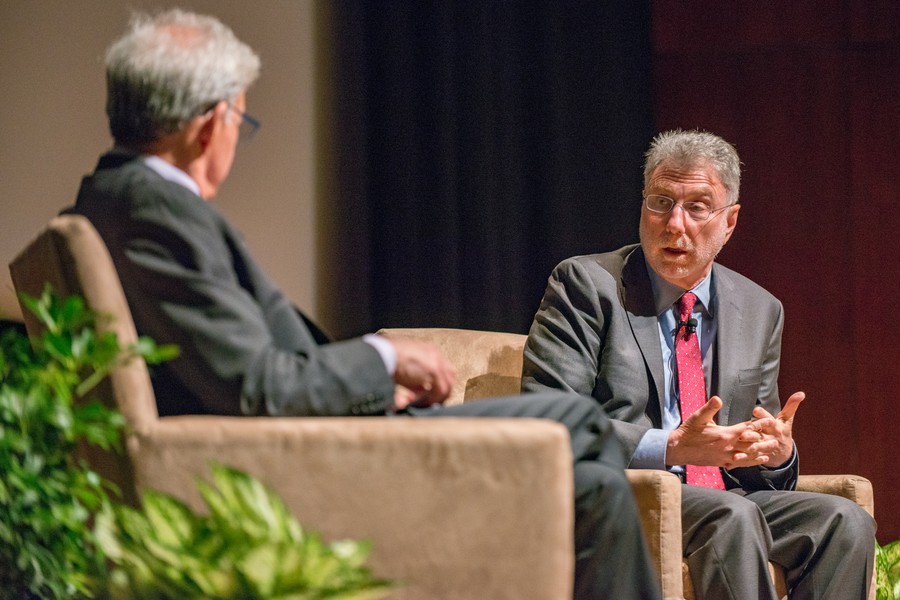 Martin Baron of the Washington Post talks with Professor Geoffrey Stone at an IOP event.

The discussion, titled “Freedom of the Press and the Future of Democracy,” was sponsored by the Institute of Politics and was moderated by noted free speech advocate and law professor Geoffrey Stone.

President Robert Zimmer introduced Baron as the 2018 recipient of the University’s Benton Medal for Distinguished Public Service, an honor that “recognizes persons in the public sphere who contributed in a systematic and distinguished way to shaping our doings, disseminating knowledge, and reflecting the values” of the University, according to Zimmer. Baron was awarded the medal during last year’s Convocation weekend.

Baron and Stone discussed what brought Baron into journalism, his thoughts on the relationship between freedom of press and a true democracy, and the specific challenges faced by the press under the current White House administration.

Baron said that growing up, his family had a “daily news habit” and he found journalism to be an excellent way to engage with his interest in public affairs, having written articles for his high school and university newspapers. He also mentioned that coverage of Watergate by the press when he was in college served as a reinforcement for his passion of journalism.

When Stone asked whether freedom of the press is essential to democracy, Baron replied that there isn’t a democracy without free press, saying when James Madison drafted the First Amendment and proposed the right of freely examining public characters and measures, it was expected of the press “that we would write about government officials, politicians, and policy makers, and, in my view, other power individuals and institutions in society.” In broader terms, Baron said, “The entirety of the First Amendment is the notion of thinking independently of the government,” an essential bedrock to the creation of America’s democracy.

A large portion of the conversation centered around modern threats to freedom of press, which Baron attributed to increasing skepticism about the notion of objective truth.

Baron believes there has been a shift in the nature of what a fact is, saying that evidence, experience, and other factors traditionally associated with factualness are “all being challenged and devalued in our society.” He attributed this to a shift in how the public views information, the existence of “irresponsible” and politically biased news sources, and the general public’s tendency to read and believe news that reinforces their preexisting beliefs.

Baron also mentioned the polarizing nature of social media, which allows the press to reach an unprecedented number of readers, yet in turn exacerbates the spread of inaccurate news sources and stories.

In response to Baron’s concerns about the spread of false news, Stone proposed an idea for government regulation of news sources. Baron rejected Stone’s proposal, stating, “I don’t want [the government] to decide what’s truth and what’s false,” but said that although he does not have a definitive solution to “fake news,” it is an issue that needs some remedy. He said that a major way The Washington Post and other prominent news organizations have been regaining public trust is showing evidence for written pieces, such as attaching the original documents to a piece so the reader can judge whether it has been reported in a fair and impartial manner.

The conversation then shifted to addressing the specific harm President Trump and his administration have done to the press. “His strategy is to disqualify the press as a holder of truth,” Baron said.

“The president seems to do best when he has an enemy of one sort or another,” Baron said, referring to Trump’s attacks on Hillary Clinton, Barack Obama, or Mexican immigrants. “Whenever he runs short on those opponents, [the press is] always available.” Baron condemned Trump’s allegations that The Washington Post is a lobbying organization for Amazon. (The Post is owned by Jeff Bezos, CEO of Amazon.) Baron drew parallels between Trump’s claims and the actions of the Nixon administration towards The Post after it published the Pentagon Papers. “That is not what should happen in a democratic society,” Baron said, firmly asserting that the press should not be subject to harassment from government officials for publishing articles that are critical of their actions or policies.

Asked about his greatest achievement in journalism, Baron named his time as editor with The Boston Globe, when he initiated the Spotlight team’s investigation into cases of sexual abuse against minors in the Catholic Church. Baron said he was proudest of his work exposing this scandal, because it had an impact on ordinary people and lent a voice to those that had been disregarded by institutions. “I think in terms of journalism that does good, that was journalism that did a lot of good,” Baron said.

Baron tried to leave the audience with an alternative perspective on journalism. “When our profession is under attack, it becomes necessary to talk about the capacity of journalism to do good and to help ordinary people,” he said.