“The Children” Asks the Tough Questions 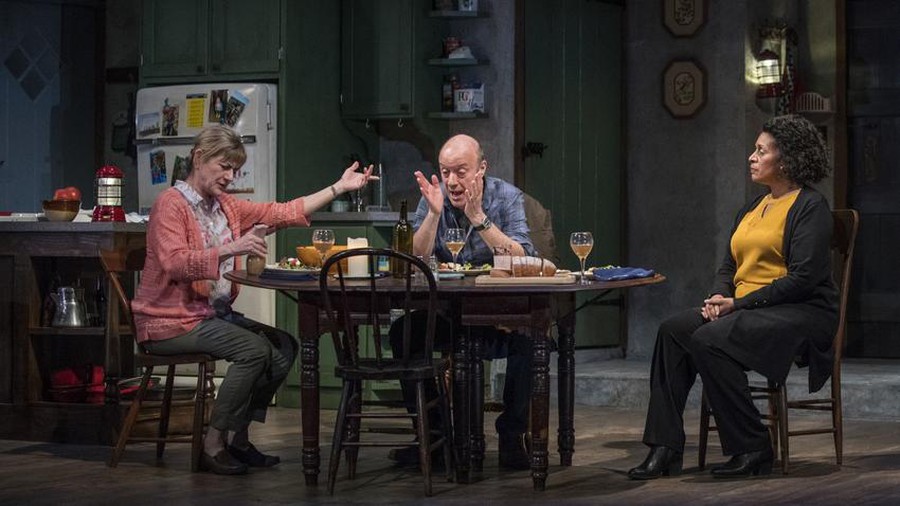 The Children was not the horror story I expected it to be based on the ominous ads on my feed. The eerie image of the man in a gas mask clutching a glass of wine belies what actually happens in the play.

Nonetheless, the image foregrounds the concept of sickness, suggesting a dying planet or an environmental tragedy that makes the air unsafe to breathe—ideas that are explored throughout the play as the cast takes on the story of three nuclear physicists facing a dim future, while grappling with their pasts.

The plot tackles many themes—environmental conservation, the young-old generational dynamic, coping mechanisms, and the nature of duty—but the one I found most captivating was human relationships in the midst of crisis.

In The Children, even environmental tragedy can’t disrupt the tumultuous relationships of Hazel, Robin, and Rose, the three nuclear physicists with backstories dramatic enough to rival those of K-drama characters. These characters demonstrate the lengths to which humans will go to adapt to unimaginable situations, amid problems that cannot be solved even in the face of catastrophe.

Hazel (Janet Ulrich Brooks) is the preternaturally organized, strict woman. Her way of dealing with catastrophe is to take even better care of her health, do yoga, follow a structured diet, and mentally reassure herself. Age, to her, is a battle she heroically takes on with the optimistic punch line: “If you’re not going to grow, don’t live.”

This prim lady finds her exact opposite in Rose (Ora Jones), a relatively carefree soul who retains elements of her wild, youthful spirit even in old age. Her coping method is to take life as it comes, without a partner and as free as a bird. Long life is not the priority. Her morals are structured around a sense of duty and what she owes to the world.

Hazel’s cold logic is complemented by Rose’s raw emotion in an explosive combination that doesn’t bode well for Robin (Yasen Peyankov), who is caught in the middle of these two extremes. Robin has succumbed to substance abuse; it soothes the guilt he feels about his role in the catastrophe. His reliance on alcohol keeps him from working on self-development or even providing his partner Hazel with the security that she expects from him. Peyankov’s comedic timing brings out the subtle scents of depression and recklessness in a broken man.

As interesting as Robin is, he can’t hold a candle to the tension that Hazel and Rose conjure. Their murky history is palpable in the atmosphere on stage. It permeates from the stage to the audience as passive aggressive remarks, offhand comments, and strange looks are tossed pointedly, time and again.

We all know a Hazel or a Rose, and we can probably all identify with either of them, making it easy to sympathize with both ends of their spectrum. As much as Hazel views Rose with contempt for her personal carelessness, and as much as Rose dislikes Hazel’s lack of flexibility, both women hold each other in a certain esteem.

Each respects what the other has, and a small part of them wishes they could have it all. This jealousy is dangerous because it doesn’t conform to the rest of their belief systems. For instance, Rose’s success in life threatens Hazel’s careful planning because it renders such efforts seemingly inconsequential.

In line with its ominous image, The Children concludes with several foreboding pearls of wisdom. Robin delivers a chilling depiction of what the future holds—perhaps one of superior technological advancements, but at what cost? Our boredom? Our freedom? What will our children see as a result of what we do to this world?