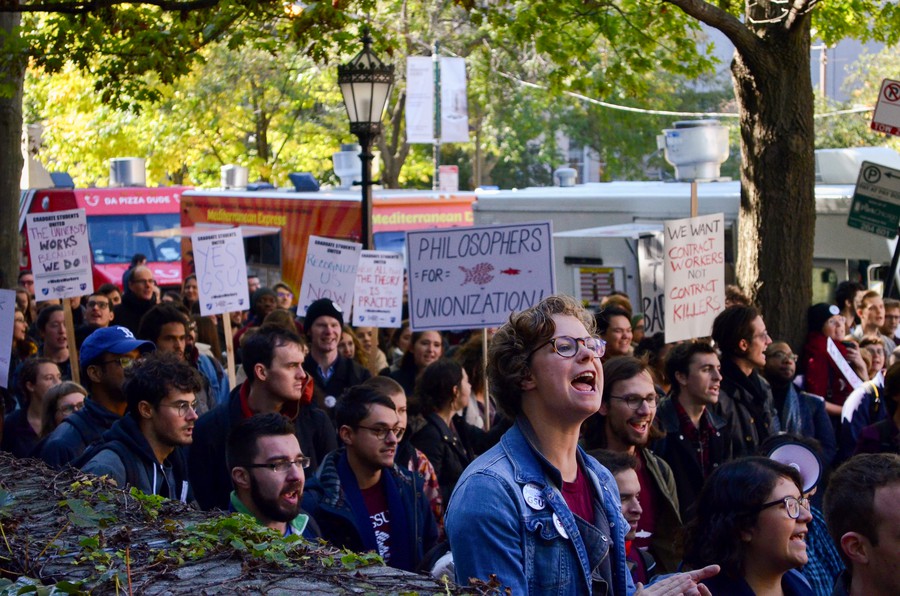 Graduate students chant at a walk out in October, 2018.

Members of Graduate Students United (GSU) plan to stop work and hold a picket line beginning next Monday, in an attempt to gain University recognition.

GSU took the unprecedented step of authorizing the industrial action by a vote of 1,134 to 112 last Monday. Although GSU hasn’t formally announced what that action will involve, talk about the demonstration has been circulating on campus and on social media.

Based on conversations with both GSU members and community stakeholders, The Maroon lays out what a strike might look like and what it would seek to accomplish.

GSU leadership has emphasized that the specifics of any workplace action will be decided democratically by a strike-organizing committee open to interested GSU members. Responding to a Maroon query on Thursday afternoon, GSU spokespeople stated that no more information about the action would available until Monday morning.

While GSU has made no formal announcement about what the job action will involve, graduate students—including thesis preceptors, graduate students teaching undergraduate classes, and other graduate student workers—have cancelled 10th-week classes, telling undergraduates they will be participating in a labor action from Monday through Wednesday of 10th week. Thursday and Friday of 10th week are reading period, meaning there are no scheduled classes during that time. It is unclear whether public demonstrations will continue past Wednesday.

As for what labor action will entail, Laura Colaneri, a Ph.D. student in the department of Romance Languages and Literatures, said, “We’re not going to be doing any of the things that graduate student labor is essential for: that’s going to include teaching; grading; answering e-mails; doing our research projects.”

How Will a Strike Impact Students?

A graduate student strike during 10th week could delay spring-quarter grades. This could cause delays for graduating fourth years, who need their grades returned by next Saturday at the latest. Fourth-years who are currently enrolled in required courses, either for their major or the Core, could be even more adversely affected, including potential delays to graduating.

Next week’s action is likely to lead to class cancellation in courses taught by striking graduate students. In Spanish 102, for example, Colaneri is the sole instructor, and her absence will lead to the cancellation of all sections.

In an e-mailed statement made to The Maroon, Brett Barbin and Bruce Li, two of the four representatives of the Class of 2019, said they were worried about the possibility that a strike could delay graduation.

“We are concerned that if the planned GSU strike extends beyond Wednesday, it may prevent fourth-years from graduating on time. We are aware that many graduating students have jobs that start shortly after June 15 and worry that they will be unable to provide proof of graduation to their employers,” the statement reads.

Graduate student instructors have stated that they would communicate with fourth-years in their classes to work out a grading plan. Colaneri said that while potential delays to graduation are “the last thing that we want to happen to our students,” she and other graduate student workers “have got to really prioritize showing how important our work is.”

When asked about how the University would respond, University spokesperson Jeremy Manier answered in a written statement, “The University has planned for a number of contingencies, and will be communicating with students to offer guidance in the event of a strike. We are committed to supporting our students’ successful completion of this academic quarter.”

In an e-mail to undergraduates on Thursday night, Dean of the College John Boyer indicated that University administration is giving no ground and urged undergraduates to report graduate students participating in work stoppages. Boyer further defined a bright-line for what constitutes “disruptive” work action: interfering with what he called “the right to freely enter and exit buildings, classrooms, workspaces, and areas where research is conducted.”

Boyer’s e-mail to undergraduates can be read here, in full.

Boyer also e-mailed graduate students, urging “graduate-student members of our teaching community” to honor their “instructional responsibilities to students in the College.”

Boyer’s e-mail to graduate students can be read here, in full.

Finally, Boyer also e-mailed the parents of undergraduate students with an identical statement as that circulated to undergraduates, except that Boyer referred to “your student.”

On Thursday night, GSU sent The Maroon a statement responding to Boyer’s email: “Much as he did before our walkout last October, [Boyer] professed the importance of our work as educators. We wish that he and his colleagues would similarly value our work when we are not about to embark on a job action.”

The statement goes on to describe what GSU saw as a pattern of administrative stonewalling: “In our 2017 NLRB hearing, one dean referred to undergraduate learning from TAs as a ‘byproduct’ of our on-the-job training. Another testified that having a TA grade papers in a class of 19 was not a help to him. And the administration has showed how little they value us by continuing to stonewall GSU for over a year and a half, rather than recognizing our union. It is precisely because of our commitment to our students that we are willing to take this action to improve our working conditions--which are their learning conditions.”

What Does GSU Want?

In several conversations with The Maroon, GSU members outlined a variety of concerns, from insurance deductibles to irregular and frequently delayed paychecks. All GSU members, however, iterated a common goal: voluntary recognition of the union by the administration.

If the University were to voluntarily recognize GSU as the official labor representative of graduate student workers, the union would likely enter contract negotiations with the administration through a third-party arbiter. There, University administration and GSU might eventually sign a contract in which the University would be bound to negotiated concessions and reforms.

Many groups beyond GSU plan to express solidarity with the strikers. Although members of Faculty Forward, the union for non-tenure-track faculty at the University of Chicago, are contractually precluded from striking, Jason Grunebaum, a representative for Faculty Forward, told The Maroon in an e-mailed statement that members “may hold classes off campus, and we may join GSU on the picket lines—just as long as it’s not when we’re scheduled to teach.”

GSU may also call on allies from the newly formed University of Chicago Labor Council (UCLC), a coalition of labor organizations whose members range from nurses at the University of Chicago Medical Center to janitors on University grounds. UCLC organized a demonstration this May Day which was attended by hundreds of union members and supporters. 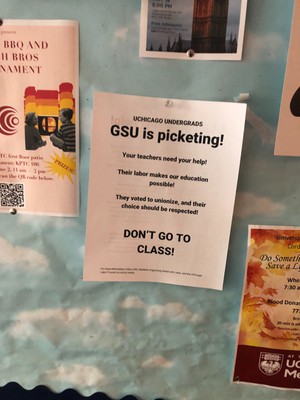 Further support may come from undergraduates and tenured professors. Several tenured faculty have explored the option of holding class off campus. Student groups including the Organization of Black Students have announced their solidarity. In a recent editorial for The Maroon, Students Organizing United for Labor (SOUL) called for undergrads to support GSU’s efforts.

“We think the most important way undergraduates can contribute is by not crossing the picket line — if your class is in a picketed building, do not go to class. You can also help by posting your support with the hashtag #YesGSU, wearing a GSU button, and signing our undergrad solidarity petition,” Sam Joyce, president of SOUL, told The Maroon.

Who Is Against GSU?

Support for GSU is not universal, even among graduate students eligible for membership.

UnJin Lee, a Ph.D. candidate in Genetics who published an editorial opposing a vote to recognize GSU last June, told The Maroon that, because GSU does not represent students from professional schools and thus only speaks for a portion of graduate students, support for GSU may not be as widespread as claimed.

On GSU’s strike itself, Lee added, “I really don't think GSU’s actions will help win the sympathy of students on the fence.”

“A union could come between students and faculty to make crucial decisions on behalf of students, focusing on collective interests rather than each student’s individual educational goals,” University President Robert Zimmer and provost Diermeier wrote in a 2017 letter addressing graduate student unionization.

Editor’s Note: GSU voted on whether to authorize an industrial action, which is a broad legal category of labor organizing that includes, but is not limited to, strike action. The word “strike” was not in GSU’s ballot questions. In this article and other reporting, however, The Maroon has used the word “strike” colloquially—that is, interchangeably with the term “industrial action.”

Hundreds of Protesters Picket Through Rain and Shine: Three Days of Strike

Union members, faculty, undergraduates, and supporters from beyond campus, gathered for the Monday through Wednesday strike.