School-wide elections begin on Monday and run through Wednesday. 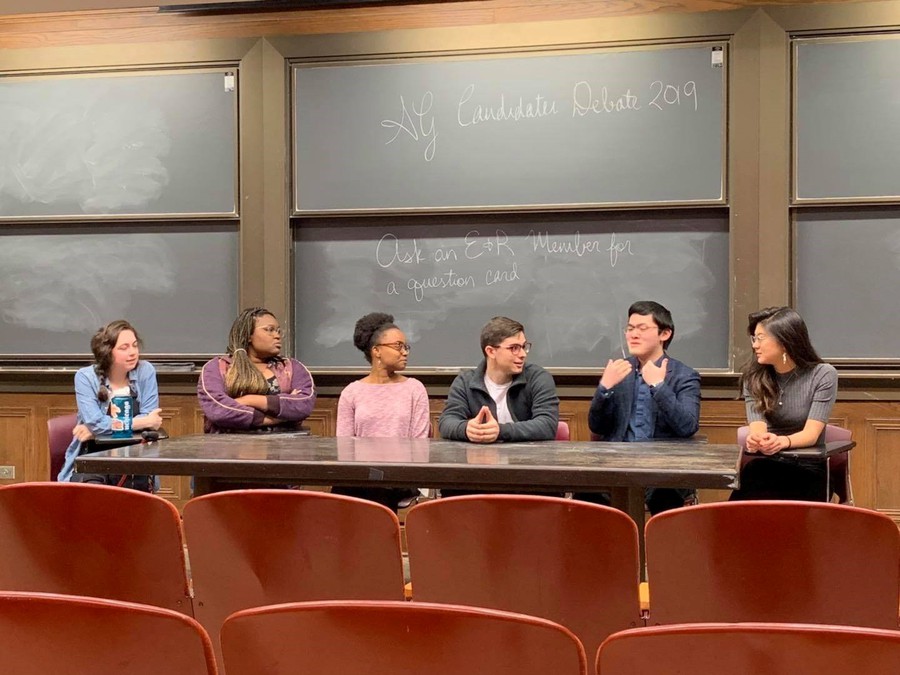 Members of the CARE and Reform slates for SG Executive positions debated the issues at an event sponsored by SG.

Over the course of the hour-long executive slate debate, members of the CARE and Reform slates responded to a number of prompts posed by the moderator and audience. Questions included a discussion of the key differences between CARE (Community, Amplify, Represent, Empower) and Reform, the role of the University of Chicago Police Department (UCPD) on campus, the extent to which Greek life would be regulated, and each slate’s ambitions and plans.

Differences Between CARE and Reform

When asked to differentiate CARE and Reform, each slate described differences in both priorities and approaches.

Dorton emphasized that CARE’s foremost priority would be to work toward providing transparency in SG. “We’re really focused on making sure that student voices are heard on every step of our platform,” Dorton said. Before meeting with administrators, Dorton promised, the CARE slate would be available to meet with the student body to identify top concerns and priorities. Furthermore, after each meeting, Dorton pledged that CARE would “publish public minutes of what’s discussed in those meetings afterwards so that the students are aware of what is going on.”

Dorton also noted CARE’s desire to partner with RSOs already involved in campus activism to achieve their shared goals. “We don’t want to be creating new initiatives that reinvent the wheel and step on the toes of RSOs that are already doing really cool things,” Dorton said. “For example, we’d love to add more funding to See Through Stigma Week. We want to start conversations rather than starting a new mental health plan. We want to be giving support to RSOs that are already doing work and recognize them for the work that they are doing.”

Reform, on the other hand, contested CARE’s claim that a commitment to transparency is a point of differentiation. “We stand for [transparency], too. Being a megaphone for student voices is really important for us,” Shishkin said.

Shishkin identified the way that Reform wishes to engage with UCPD as a point of major differentiation between them and CARE. According to Shishkin, Reform slate’s “stance on UCPD—identifying issues and trying to work on those issues–is a point of distinction, because we want to work with UCPD, not against it and trying to obstruct it, in order to make sure that UCPD can function well and also be better for students and community members in the local area.”

Brown has previously asserted that “I do however support the referendum (to repeal executive pay) that happened, and because it was deemed vastly unpopular I will not be pushing for it while in office.”

In several questions revolving around the UCPD, the two slates quickly diverged in their characterization of the police force.

According Liang of the Reform slate, “UCPD is really a very critical part of our safety here at UChicago,” emphasizing his claim by stating that “if you look at the statistic of crimes online, you see that Hyde Park is truly a bubble—it's safer than its immediately surrounding communities because of the UCPD.”

Liang couched his praise for UCPD with an admission that the force is not perfect. He noted that “we do realize that UCPD does have problems, especially regarding their interaction with surrounding communities.” He promised that the Reform slate would “have hearings with community members and students who have been affected by the practice of UCPD—we want to hear their stories and write a report to recommend best practices going forward.”

CARE presidential candidate Brown clarified that the slate was not “running on a platform of abolishing UCPD,” but believed that the “UCPD needs a lot of improvements.” According to Brown, “some of us sometimes get confused for the people that they’re running after; some of us have negative experiences with UCPD all the time.”

Brown vowed that CARE would not only increase the transparency of UCPD but would make sure that “students are empowered to have safe interactions with UCPD.” To do this, she promised to institute “‘know your rights’ training—especially for people of color, students of color—on campus, but also on the community, so we can have safe interactions.”

The two slates also differed on the issue of Greek life.

Shishkin said he believes “that the Greek Life community on campus is an important partner in the journey to make this campus a safer place.” As a result, Shishkin promised to “create internal inter-Greek accountability mechanisms” where “fraternities keep each other accountable.” Shishkin also promised oversight that “also includes third parties, such as Student Government, [and] independent journalists at The Maroon [to] put together a community council system where people will be able to propose how to keep Greek life safe and accountable.”

Brown, on the other hand, was quick to clarify that “fraternities and Greek life have never been a big part of our platform,” stating that “we have a top 10 goals listed out, and Greek life isn’t in that top 10 goals.” That said, Brown emphasized CARE’s unequivocal desire that “Greek life be recognized by the University.”

Currently, Greek organizations are not recognized by University administration, which, as a result, does not impose any specific regulation on Greek activity.

In a 2016 interview with The Maroon, John Ellison, dean of students in the College, characterized exactly what a lack of recognition means for Greek life at the University of Chicago. With a recognized organization, Ellison stated administrators have two options: “You pull their recognition or you take action against the group.” In unrecognized Greek organizations, however, Ellison stated that “we don’t have that ability because they don’t have it [recognition] in the first place.” Despite this, Ellison stressed, “We can hold individual students accountable, but our rules also allow us to hold leaders responsible for the actions of the group, even if it’s a non-recognized group—whether or not they were there or involved.”

CARE and Reform also differed when asked about their priorities and how they would achieve them.

CARE prioritized increasing inclusivity in SG specifically and throughout campus more generally. “One of our biggest goals and our first priority on campus would be about recruiting marginalized groups into Student Government (SG)…. We would want to see the number of women on SG double if possible,” said Brown. She also emphasized including Black women, queer people, and students with disabilities within SG.

Dorton concurred, saying, “I think getting more people involved in SG—making sure that more people feel empowered to use their voices to improve the student experience—is a really important thing for SG to be doing.”

Reform, meanwhile, promised to make campus safer and tackle the issue of mental health. “Our real important point of focus,” Shishkin said, is “safety on campus…and better interactions between UCPD and surrounding communities.”

To that end, Shishkin promised that “one of the first things we’re going to be focusing on is improving the alert system,” citing  “11 robberies that occurred near campus this past March” for which the University did not release a security alert.

Wang also promised to promote mental health initiatives, vowing to “allocate $20,000 of our budget into mental health,” a policy move that she promised would “not be diminishing the efforts of any other mental health organization” but rather would focus on “empowering them and give them the funding and community, area, and space to do what they do.”

Shortly after the slates concluded, a packed field of liaison candidates took the stage for a debate of their own. Two positions—Undergraduate Liaison to the Board of Trustees and Community and Government Liaison—debated at the same time.

Candidates for Community and Government Liaison emphasized a desire to engage with communities surrounding campus.

Rachel Abrams, a third-year in the college, emphasized a need to recognize the University of Chicago’s place within a larger South Side community and communicate with its neighbors. “As Community and Government Liaison,” Abrams stated, “one of the things that I really want to work on is just having those lines of communication open.”

Candidates for Undergraduate Liaison to the Board of Trustees vowed to bring up key issues facing the student body with the University’s trustees, though they differed in how they would facilitate this dialogue.

Ridgley Knapp, a third-year in the College and a member of College Council, vowed to “hold the trustees accountable for the actual student body.” To do so, Knapp proposed creating a “public forum where any undergraduate and grad student who wants to can come and get a chance to ask any questions they want of the trustees.” According to Knapp, this would be a vast departure from the status quo, which is limited to “one meeting a quarter, with about eight to 10 students and three to four trustees, around one issue.”

Voting for all positions of Student Government executive slate, liaisons, and College Council begins Monday, May 6 and ends on Wednesday, May 8.