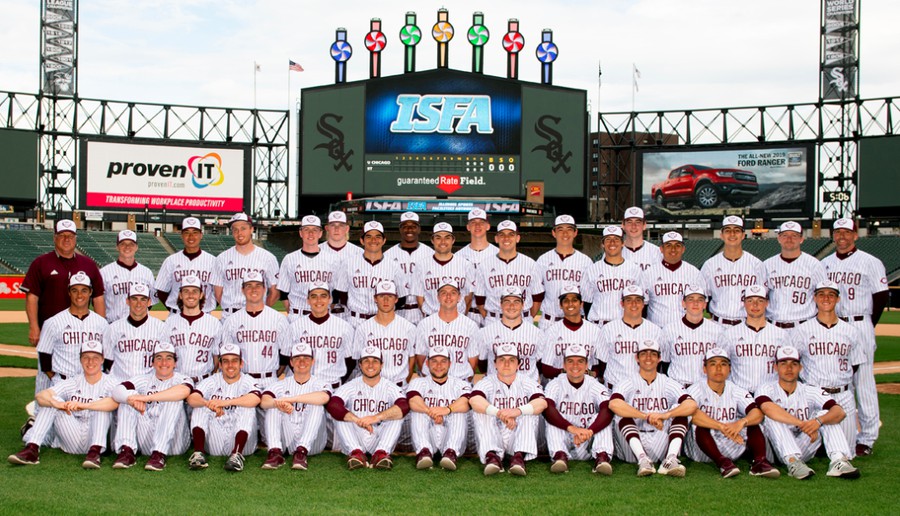 As the sun set over J. Kyle Anderson Field on Sunday evening, the University of Chicago baseball team concluded its first regular season back in the Midwest Conference in a resounding fashion, beating the visiting Beloit Buccaneers by scores of 7–6 and 11–6. After splitting two games at Beloit on Saturday, the Maroons needed to sweep their home slate in order to advance to next weekend’s playoffs. With a little extra help from their fourth-year Maroons—on senior day, no less—Chicago certainly rose to the occasion, wrapping up the regular season at 23–9 overall (including 10–0 at home) and 11–5 in the Midwest Conference North Division.

Sunday’s opening tilt certainly was not short of action, as it took the Maroons 11 innings of back-and-forth baseball to defeat Beloit in their first must-win game of the day. Fourth-year Ian Bohn opened the scoring for Chicago with a first-inning RBI single, but the Buccaneers rallied in the top of the second for two unearned runs. The Maroons battled back over the next few frames, evening the score on a fourth-inning fielder’s choice by fourth-year Josh Parks and taking the lead on another Bohn RBI single in the fifth. Meanwhile, fourth-year ace Brenton Villasenor did his part on the mound, striking out six over the first six innings without allowing an earned run. Although Beloit got to Villasenor in the seventh, fellow fourth-year Ravi Bakhai took over and limited the damage to two runs, which the Maroons instantly made up in the bottom of the inning with RBIs from first-years Benjamin Rosengard and Carson Weekley. Beloit put up another two-spot in the eighth to reclaim the lead, but in the bottom of the ninth, Parks tied the score with a clutch two-out single through the right side of the infield, scoring first-year Cristian Rodriguez and sending the game into extra innings. The game stayed knotted at six until the 11th, when second-year James Kelly laced a walk-off single—which might have been a double, if his teammates did not mob him on the base paths before he reached second—to keep Chicago’s playoff hopes alive. Other Maroon highlights included Bohn’s perfect day at the plate (4–4, 1 IBB), three hits by second-year Brian Lyle, and two perfect innings of relief from second-year winning pitcher David Clarke.

Although game two started slowly for the Maroons—Buccaneer bats pounced for three runs over the first two innings—Chicago bounced back in the bottom of the second to take a lead they would never relinquish. A sacrifice fly from Parks and two RBI doubles by fourth-years Brady Sarkon and Connor Hickey put the Maroons on top, 4–3. With the help of a few Beloit errors, the Maroons plated seven more insurance runs over the fourth, fifth, and sixth innings off of the bats of Weekley, Hickey, Sarkon, and Rodriguez. Additionally, key contributions by Rosengard (2–5, 2 R) and fourth-year Max Brzostowski (2–3, 3 R) at bat, on the bases, and in the field helped Chicago secure the sweep and the best record in the North Division. On the mound, third-year starter Jacob Petersen showcased his stuff over 2.1 innings but was victimized by a few questionable calls that broke Beloit’s way. Second-year reliever Chandler Yu picked up the win with four dominant one-hit frames, and third-year Arno Curtis shut the door with 1.2 effective shutout innings before the game was called due to darkness.

Brzostowski had a particularly big fanbase on Sunday to support him and the Maroons in his final collegiate regular season games. Speaking after the victories, he could not help but grin while expressing his excitement and pride in Chicago’s winning efforts—especially coming on senior day and in their most important matchups of the year: “There’s no better feeling than that. Both games today were full team wins, and this is a really fun team to play with. All these guys gel together, and when people need to step up, we do it.”

This upcoming week, Chicago has two non-conference games scheduled (at UIC and Edgewood) before traveling to the playoff tournament on Friday and Saturday alongside Ripon, Monmouth, and Cornell colleges. If Brzostowski and the Maroons continue their winning ways, they have a chance to return home with a championship in their first Midwest Conference season since 1987.