On Images: The Deceptive “Objectivity” of a Photo

The framing of a photo, however "candid," is rife with subjectivity. Photojournalism isn't as objective as it might seem. 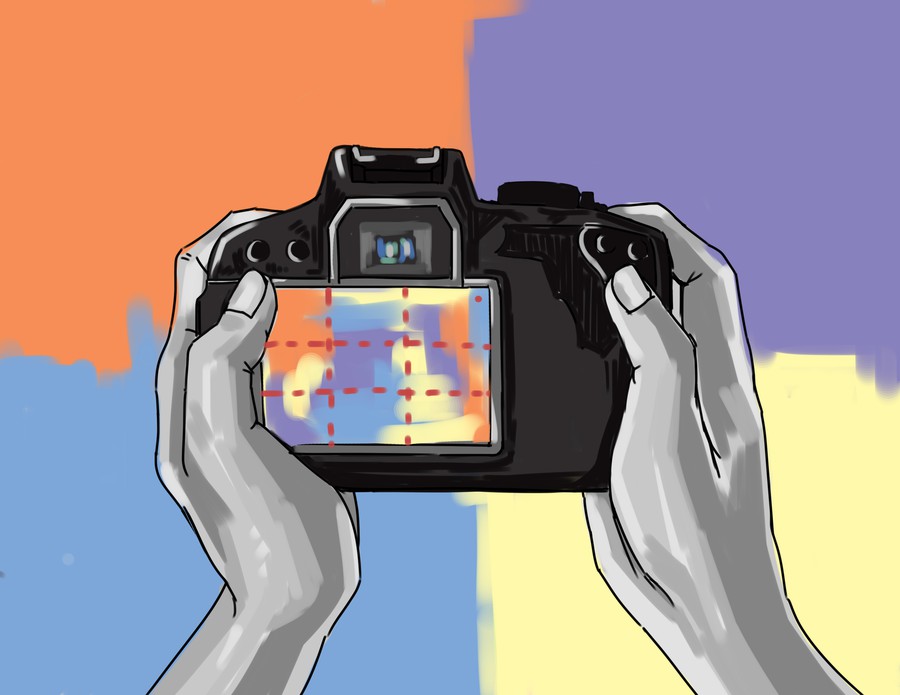 When The Maroon updated its bylaws in my third year as photo editor, I noticed something troubling in the proposed revisions. The Photo and Video sections were to be classified as Production, not Editorial. This struck me as altogether strange, as I see photographs as editorial content in visual form. But clearly, others saw photographs as nothing more than material that makes up a newspaper; journalists might have to wrestle over the wording of a headline or the framing of an article, but a photograph was something as neutral as ink. This sidelining of photography on the grounds of its “self-evidently objective” qualities isn’t new. But it poses a serious problem for journalistic practice, both on college campuses and in professional newsrooms, especially as we head into an increasingly visual age.

In her article, “To Tell the Truth: Codes of Objectivity in Photojournalism,” Dona Schwartz writes, “Since the introduction of photography viewers have invested the medium with a level of authority and credibility unparalleled by other modes of communication.” There is a general perception that photographs have a special relationship with reality, that a photo shows you something just as it is, as it was, as it happened. This unmediated relationship with reality has been the professed goal of journalists who claim the title of “objective.” But, given that we do not actually see the world through a rectangular viewfinder, photographic claims to an unmediated presentation of reality are deceptive. For photojournalism, which gains legitimacy from its double gloss of presumed objectivity, this false notion of objectivity is thus especially relevant.

When I trained photographers new to photojournalism, I would stress to them that photojournalism differs from the “artsy” photos of Instagram. Photos are candid, not posed. We do not crop out information that would change the meaning of the photo. All photos come with written captions to provide context. In this way, I fell into the trap of portraying photojournalism as a uniquely honest medium. Yet both historical and current uses of photojournalism tell a different story.

Jacob Riis, working in the early 1900s, is hailed as one of the earliest photojournalists. Making use of the newly invented flash photography, he aimed to shed light (literally!) on the social conditions of urban slums in his work. In this, he was no neutral observer, but a reformer-journalist—with his photographic collection How the Other Half Lives he sought to shock viewers and jolt them into combating poverty. A quick glance through Riis’s most iconic photographs makes one thing clear: the viewer is peering into a world of poverty and pain. This feeling of peering into a world assumes the viewer lives and moves outside of such a world. Between the perspective (often looking up at or down at, but rarely at eye-level) and the use of hard, intrusive flash rather than a long exposure, the taking of the photograph defines the sensibilities and narrative of the photo.

A hundred years later, Tonika Johnson’s photographs of Englewood, one of Chicago’s highest-crime neighborhoods, deliberately oppose the kind of narrative seen in Riis’s “shock and reform” photos: “She brings the lens of an insider…who isn’t there just to extract the value of shocking photographs to sell to an exploitative, voyeuristic public,”City Bureau co-founder Bettina Chang said of Johnson’s photography in a Columbia Journalism Review article. “She doesn’t turn away from the signs of poverty and other misfortune in Englewood, but she also isn’t solely looking for those types of photographs.” In one photo, two boys face the camera, perched casually on a park bench. We look at them from eye-level, the lighting bright and welcoming, and even the caption, which specifies that they are brothers, speaks to a potential intimacy between viewer and subject that is not present in photos by Riis that label his subjects by their ethnicity or gang affiliation. These two examples underscore the fact that photographs are not inevitably artifacts, faithfully rendering a world that never alters, but rather, the product of choices, conscious or unconscious, made by the photographer. Different choices can create a radically different impact on a casual viewer.

The journalistic community has increasingly recognized the ways that a journalist’s own subjectivity can influence his or her stories. These critiques of the cult of objectivity are more nuanced than the current fake-news hysteria, pointing out that journalists and their editors make choices daily about what stories to report on and what information and voices to foreground in their stories. If a newspaper has no sources in a particular community, then journalists may miss a relevant story or fail to give voice to an important perspective on another story. Journalists pride themselves on fact-checking, while often missing the potential for misleading narratives to do harm in the same way as erroneous facts. The framing of a narrative is not objective: Rather, it is a subjective choice informed by a journalist’s (and their editor’s) values.

This is even more so in the case of images. The hashtag #IfTheyGunnedMeDown was used to criticize how newspapers either unthinkingly or maliciously propagated negative stereotypes of murdered Black men in their photo coverage. A 2011 case study examines the use of photographs to build visual narratives and argues that the 2009 “crime waves” in Cedar Rapids and Iowa City were narratives constructed by selective visual coverage “reliant on negative narratives and stereotypes about places and people, not upon reality.” Precisely because we are prone to perceive photographs as unmediated truth, they pose an even greater danger of cementing biased or misleading narratives.

In an increasingly visual age, we need to be aware that photographs shape narratives as much as, if not more than, words do. In the end, after objections raised by the Photo and Video sections, Multimedia was accepted as Editorial, and not Production. But this hardly solved The Maroon's blind spot toward photography, as the photo incident last quarter made clear. Any photojournalism convinced by the myth of its own objectivity is one that becomes unaccountable, irresponsible, and reckless. Moreover, any journalism that cannot comprehend the power of images is one that will inevitably abuse that power.

Zoe Kaiser is a fourth-year in the College and a former Photo Editor.