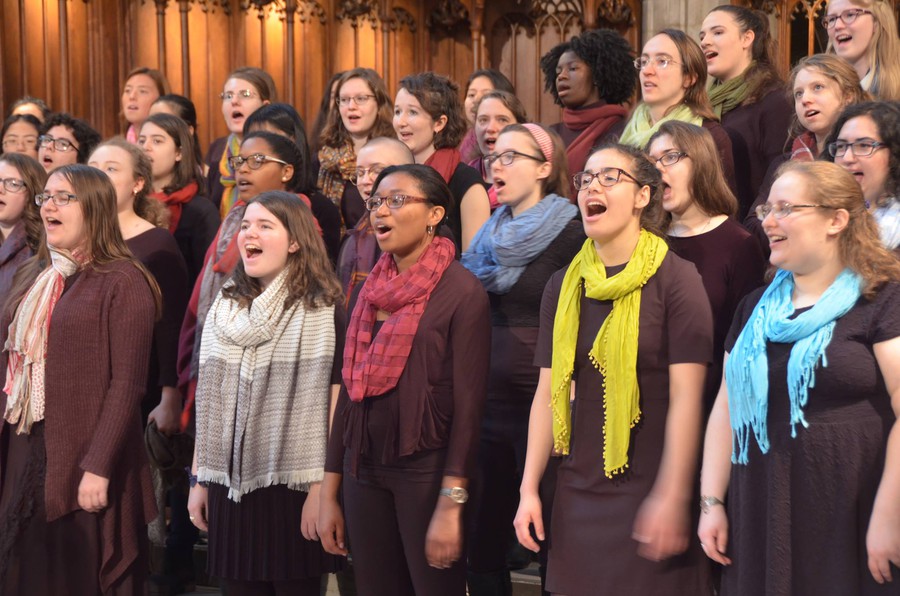 Mollie Stone is the current director of UChicago’s University Chorus and Women’s Ensemble. In addition, she directs the Chicago World Music Choir, conducts the Chicago Children’s Choir, and teaches for Village Harmony—a music education organization with traveling international summer programs, music workshops, and presentations. Along with her multiple commitments, she is deeply devoted to choral music from South Africa, Corsica, and the Republic of Georgia. Last week, she sat down with The Maroon to discuss her role in some of these programs, her love for South African music, and her plans for the future.

This interview has been lightly edited and condensed.

Chicago Maroon: What led you to the University of Chicago?

Mollie Stone: I went to the Lab School and my family had worked at the U of C, so it’s sort of coming home in a way. But I didn’t necessarily ever expect to work in the place where I grew up. I went, very intentionally, away for many years. Then I got a job offer in 2005 to return to Chicago. It was funny, because I took a job working with the Chicago Children’s Choir, even though I had no intention of working with children’s choirs. I wanted to work in a university setting. But there wasn’t any position at U of C, so it wasn’t even something I thought about. Then, I think it was 2011, the current director of choral activities [at the University of Chicago] asked me to take some of his rehearsals—he was going to be out of town. Then he asked me to take his ensemble for a whole quarter, and then suddenly they started creating a position for me. So it was sort of a perfect, natural transition, because I realized that I actually love working with children, but I really missed working in academia. So now I have this perfect balance where I’m part-time at U of C, part-time with Chicago Children’s Choir, and part-time [with] Village Harmony in the summers, abroad.

So that’s basically how I ended up at U of C, and I love it because I love doing music with people who are not in a conservatory setting. [I love] being with people who are majoring in all sorts of other things, but just love singing, and want to come together to do this not because they have to for their major, but because it’s this breath of fresh air from the rest of their life. It’s such a beautiful act of coming together to make music once a week that’s really meaningful; it’s so wonderful to make music with people like that.

CM: Can you tell me a little bit about the University Chorus Ensemble?

MS: The University Chorus is this sort of big ensemble, and it’s a real mix of undergrads, grad students, faculty, staff, and community members that’s very evenly spread out between all of those different populations. We do a lot of classical repertoire from all different time periods, we do world music, and we do American music from a variety of different traditions. I like putting together concert programs that juxtapose all of those next to each other because I really believe that music from all cultures should be just as elevated as classical repertoire because they’re very connected, and it’s important to show how connected they are.

The Women’s Ensemble actually does similar repertoire. They are primarily undergraduate, but we do have some grad students, a few faculty/staff, and a few community members.

CM: Can you elaborate a little bit about your connections to South Africa?

MS: When I was a teenager, 16 or 17, I was a member of the Chicago Children’s Choir—which was a very different organization than it is now (it was really small and homegrown; now it’s like 5,000 singers across the city)—and we got to go on a five-week tour in South Africa. It totally changed my life, and I completely fell in love with the music, the culture, the languages, the people, the history, and everything about it.

So I fell in love with South African music, but I was horrified by how badly it’s taught in the U.S. and how inauthentically people here perform and learn it. That’s part of the reason I want to juxtapose music from other cultures and classical music, to show that you need to give it just as much attention, dedication to performing it with integrity, and attention to performance practice—which means doing it as authentically as possible—as you would classical music.

For my junior year I studied abroad at the University of Cape Town because I wanted to learn more about South African music. After that, I realized that one of the problems is that we just didn’t have a good way of learning music from that culture. I got a grant to go back to South Africa to try to create a teaching DVD. I figured since their music is transmitted orally and not through transcriptions, the best way to do it would be to teach it the way they teach it, which is through the oral tradition. So I went and recorded South Africans teaching the songs they wanted to share, and I said, “Here’s a choir. Sing it as you want us to sing it,” and they performed it, and then I said, “Great, have a director come forward and talk about the piece and what it means to them. Have members of the choir come up and do the same. Have a soprano come out and teach the soprano part, an alto come out, etc.” Basically it gave people here the closest thing they could to have the chance to learn it directly from the source, and to actually hear what it’s like coming from their voices.

CM: What drew you to South African music as opposed to other cultures?

MS: South African music sounds so powerful and beautiful. And there are reasons for why that is the case. First of all, I was drawn to it because I love the fact that people were using it as a means of political and social struggle. It’s amazing to see how they did it during the anti-apartheid struggle, but it’s even more amazing to see how they did it in the struggle against the HIV/AIDS epidemic. The levels at which they used it to educate people, to spread information, to mobilize people to take action, to protest the government and the pharmaceutical companies, to provide comfort and support to those who are suffering, to preserve a sense of cultural identity under oppression, and to raise awareness abroad of whatever plight that was happening in the country—it’s unbelievable. It’s just the powerful use of choral music; I just don’t see it happening quite that way in any other culture. Certainly other cultures use their polyphonic (many-voiced) singing traditions for one or more of those purposes, but I’ve never seen any use it for all of those purposes at the same time.

Also the fact that South African choral music has movement, all of it has movement. The act of singing involves moving, it’s not two separate things. It’s not like, this is a song and then it’s choreographed—the movement is part of the singing. That’s just amazing, that way of being engaged with your body. Especially with the political stuff. I mean you see people who are disempowered, and then they use their body to show their power.

And then I love the sound of South African languages. I definitely tend to fall in love with music when it’s in a language that I just like the sound of.

CM: So I know you do workshops now—what does that entail?

MS: I do workshops in the U.S., basically to try to get people to fall in love with the music of other cultures and question why they do it so badly here, and maybe open their eyes up to the fact that they could do it better. In foreign countries, I’m either bringing people to those countries to make them really fall in love with that culture and forge a connection that’s much more deep with people who live in that culture.

So, when I go to South Africa, I’ll work with a group that is a lot of foreigners and some South Africans. They’ll teach us a million of their songs, and then we’ll teach everybody a song from the Republic of Georgia, a song from Bulgaria, a song from Basque country, a song from Cuba, a song from all over the world. That way we’re also sharing songs from all different traditions with people who wouldn’t normally have access to that music.

Our next thing is we’re trying to figure out how to get enough money and get visas for people to bring all of these experts in their own music to other countries where they can learn each other’s cultures first hand. We just started doing this, we brought an amazing Cuban teacher to the Republic of Georgia last summer and we’ve brought some Georgians to Corsica. It’s harder for South Africans to get visas because so many more of them are not employed full-time, but that’s my next goal…to get South Africans to some of these countries, and some of these other people to South Africa.