From Phi Beta Kappa to Psi U, The Maroon to Tennis, John Paul Stevens was the “Big Man on Campus”

John Paul Stevens (A.B. ’41), the third-longest serving Associate Justice of the Supreme Court, passed away on Tuesday at a hospital in Fort Lauderdale, Florida, following a stroke. He was 99 years old. As of present, Stevens is the only Supreme Court Justice to have attended the University of Chicago, for undergraduate or law school studies.

On campus, the justice’s legacy extends far beyond his judicial opinions. Stevens is remembered as a vigorous student, intrepid athlete, dedicated member of Greek life, and editor-in-chief and regular columnist for this paper.

Stevens, who was known as a conservative when he began his time on the bench, drifted away from the right wing over time, shifting to become a leader for the Court’s liberals. In his later years as a justice, Stevens authored opinions that defended the constitutionality of affirmative action, argued for further restrictions on gun rights, and sought to protect voting rights.

Stevens retired from the Supreme Court in 2010, at the age of 90. Then-president Barack Obama appointed Justice Elena Kagan for his seat. In a twist of fate, Obama, Kagan, and Stevens had each spent time as educators at the University of Chicago Law School.

At the genesis of his legal career, Stevens obtained his law degree from Northwestern University; worked as a partner at his own firm as well as a special prosecutor and Senate Subcommittee investigator; was Second Vice President of the Chicago Bar Association; and served on the United States Court of Appeals for the Seventh Circuit.

But, before he became “Your Honor,” Stevens was known on at UChicago as “Big Man on Campus.” A front-page feature on the September 23, 1940 issue of The Daily Maroon described a young Stevens as just that: “probably the biggest man on campus.” Stevens was editor-in-chief of The Daily Maroon, today The Chicago Maroon, raising the possibility that the article presented what journalists might term a conflict of interest.

Still, ever-thorough, Stevens’s paper offered an ordered list of his own greatness: “in view of his being (a) Head Marshal, above which there is no higher. (b) member of Owl and Serpent, senior men’s honorary society. (c) chairman of the Board of Control of the Daily Maroon. (d) prime practitioner of the “Shucks fellers” and unassuming school. (e) an out and under authority on the battle of Gettysburg. (f) very eligible.”

Stevens had a long and intimate connection with Chicago. He was born in the city on April 20, 1920, and grew up in Hyde Park. According to a biography by Chicago Magazine, as a child, Stevens belonged to a family that occupied a privileged place in Chicago society. The Stevenses, among other ventures, owned the Stevens Hotel on South Michigan Avenue, a “new Versailles rising” that could “produce 120 gallons of ice cream per hour” while patrons played miniature golf on the roof. Though the hotel became insolvent during the Depression, heralding difficult times for the Stevens family, the building still stands today as the Hilton Chicago.

As a child, Stevens attended the UChicago Laboratory Schools. Later on, he obtained his undergraduate education at the University of Chicago, where, in addition to obtaining a bachelor’s in English with highest honors, he quickly became a fixture at all levels of University life.

He was an accomplished student, inducted into Phi Beta Kappa and chosen Head Marshal of the Class of 1941. Stevens also served as editor-in-chief—then called “chairman”—of The Daily Maroon, until he “resigned due to the pressure of other activities,” as reported in the December 19, 1940 issue.

One of those other activities was playing tennis for the undefeated team of 1938. Stevens was also a social fixture: He was a brother of Psi Upsilon fraternity and was tapped to be a member of the now-defunct Owl and Serpent secret society, the only known secret society to exist in UChicago history.

At The Maroon, Stevens published a regular column documenting campus Greek life, often taking editorial liberties in his descriptions. In the December 7, 1938 edition, he lauded the typical Psi Upsilon man as “a Joe College man, who is fond of bow ties, saddle shoes, and Mortarboards.” The description presents a mirror image of its own author: Stevens was a Psi Upsilon man who both obtained Mortarboards with incredible efficiency and expressed a legendary fondness for bow ties.

Read clippings of his writings on Greek life here.

Of Phi Gamma Delta, Stevens wrote on November 14, 1939 that “in scholarship, Fijis are below average.”

Of Sigma Chi, “in spite of shady beginnings,” wrote Stevens on December 13, 1938, “Sigma Chi has grown to be one of the strongest fraternities in the country”

And of Delta Upsilon: “[Brother] John Patrick…maintains that there are more consumptives in the DU house than in any other house on campus,” Stevens wrote on November 17, 1939. “If any freshmen believe this, they needn’t bother about going to DU rushing functions.”

Stevens rigorously documented each fraternity, commenting on everything from dues to social standing and who, in his view, were the most prominent brothers in each grade level. While an Associate Justice of the Supreme Court, Justice Stevens’s opinions were hallmarked by the same meticulous candor with which he drafted columns on The Daily Maroon. 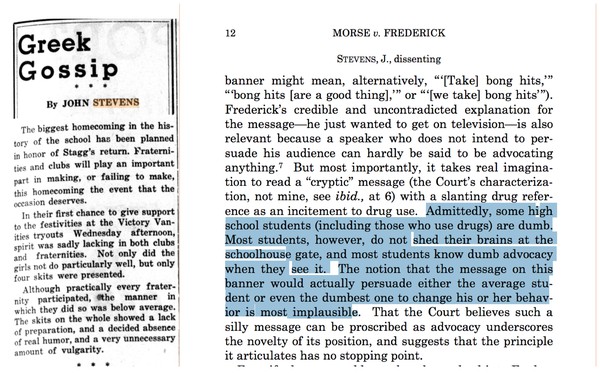 Two examples of Justice Steven’s deadpan wit: The first, a November 11, 1938 column in The Maroon, the second, his dissent in 2007’s Morse v. Frederick

The Maroon Archives and The Supreme Court

A key example of Stevens’s legal precision, and of his evolution in viewpoints, was his stance on affirmative action. In Regents of the University of California v. Bakke (1978), Stevens joined the majority in ruling that race-based affirmative action using a strict quota system was unconstitutional. By Gruetter v. Bollinger (2003), however, Stevens was of the opinion that affirmative action was constitutional on two specific conditions. First, the state had a compelling interest in promoting diversity in schools. Second, merely considering race as an individual attribute in an applicant’s holistic portfolio constituted “narrow-tailoring,” meaning that the practice was not overbearing.

Other key opinions that demonstrate the liberal bent of Stevens’ later legal career include his skepticism of the idea that the Second Amendment unilaterally guaranteed gun rights, advanced in D.C. v. Heller (2008), and his impassioned defenses of civil liberties in Bush v. Gore (2000) and Citizens United v. FEC (2010).

While Stevens’ judicial opinions are preserved in the Court’s archives, his greatest feats of authorship are memorialized in The Maroon’s archives—work that earned him yearbook plaudits for adapting “[The Maroon] artistically to make the paper at least more readable that it has been in five years.”

From The Maroon's Archives: John Paul Stevens' Writings on Greek Life in College