Some community stakeholders, such as the University, are concerned the ordinance in its current state might disincentivize investment.

By Matthew Lee    and Elaine Chen 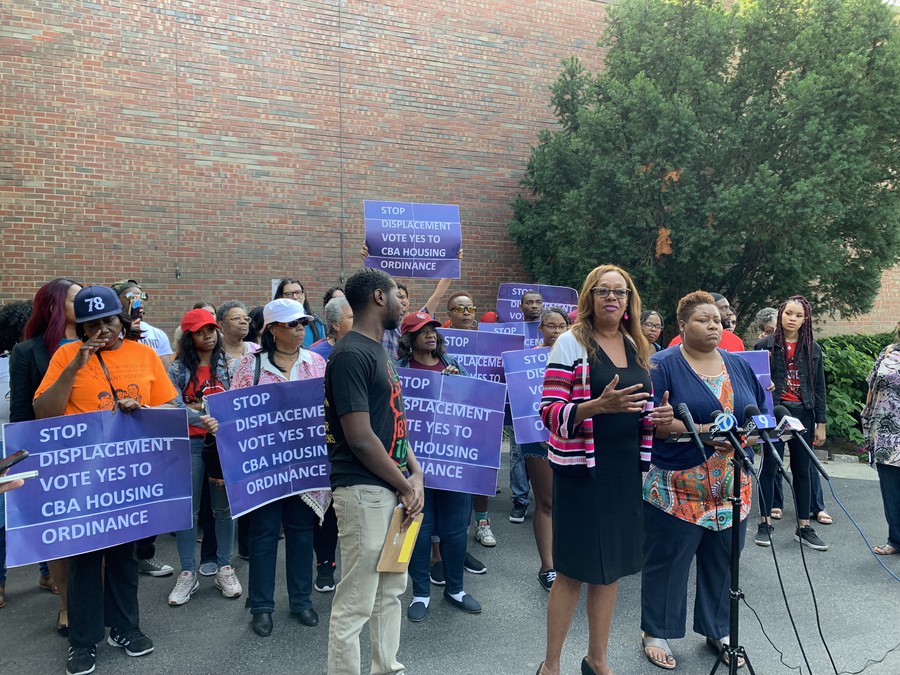 A three-year-long effort to pass an ordinance addressing concerns of displacement around the forthcoming Obama Center has moved from the streets to the floor of City Hall.

Last Wednesday, local aldermen introduced a Community Benefits Agreement (CBA) housing ordinance to City Council’s housing committee. If passed, the ordinance would establish stricter affordable housing requirements in the area around the Center, create a community trust fund, and call for a study to assess the appropriateness of imposing fees on large developers—potentially the University of Chicago.

Some community stakeholders, such as the University, are concerned with certain elements of the ordinance. They say they support efforts to prevent displacement but fear disincentivizing investment when the goal of the Obama Foundation is to spur economic revitalization with the Center.

The proposed ordinance is focused exclusively on housing issues. When pro-CBA activists began organizing, they had also demanded requirements on employment and education opportunities, environmental sustainability, and transportation improvement.

“You eat an elephant one bite at a time,” said Fifth Ward Alderman Leslie Hairston at a press conference last Tuesday. Alex Goldenberg, an activist with Southside Together Organizing for Power who has long pushed for an ordinance, told The Maroon that more ordinances “are in the works.”

Hairston, who has been in office for 20 years and has had a historically combative relationship with CBA activists, began to voice support for a CBA ordinance in April, after residents voted overwhelmingly in favor of a CBA ordinance in a referendum in April’s city elections.

She introduced the ordinance with 20th Ward Alderman Jeanette Taylor, who assumed office in May and ran heavily on supporting a CBA ordinance.

The ordinance comes as the construction of the Center faces other obstacles to its construction in Jackson Park, including a drawn-out federal lawsuit claiming the city should not grant the Obama Foundation—a private organization—use of public parkland, as well as a federal review. 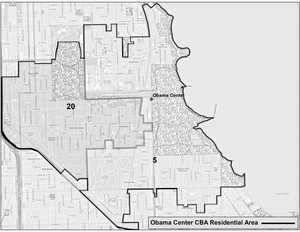 A map of the region affected by the CBA ordinance.

The ordinance additionally imposes “community engagement requirements” on developers, which includes holding at least two public meetings within half a mile of the proposed development site.

It also requires anyone who is selling property in the region to first notify a list of “qualified purchasers”—defined as a list of organizations, companies, and banks that have shown a commitment to preventing displacement—before selling the property on an open market.

The University, which said that it has been in talks with the aldermen as they drafted the ordinance and with community groups as part of a new initiative through the Office of Civic Engagement, voiced several concerns.

“We support [the aldermen] in their ongoing work to enhance residential stability, including the availability of affordable housing, and to minimize displacement in the community,” the University said in a statement. “We have concerns with the ordinance as currently proposed, however.”

In an interview with The Maroon, members of the Office of Civic Engagement said that by requiring developers to rent out 30 percent of their units at a lower price while not providing them subsidies, the ordinance could disincentivize developers from building projects in the area.

“We support displacement mitigation through wealth generation, not just locking in low-income housing,” Adams said. “Job creation, business development, and investment are needed in order to facilitate the return of the middle class to the South Side.”

Obama CBA Ordinance by The Chicago Maroon on Scribd

Another part of the ordinance sets up a fund that provides loans and grants to local residents to help subsidize their housing or support their small businesses. The fund would be governed by a mix of members who are elected by local residents with some who are appointed by aldermen.

The ordinance states the city would provide no more than $200,000 to set up the fund and no more than $2.5 million in an initial grant to the fund. When asked how the fund would be further financed, Hairston said at Tuesday’s press conference, “We’d ask the city to kick in some money, we could also bond, we’d obviously look to the [Obama Foundation] for some support, and we would look for other philanthropic organizations to do so.”

The last part of the ordinance requires hiring an independent consultant to study the “appropriateness and scope” of imposing a “commercial linkage fee” on local large developers that would be directed toward funding affordable housing projects.

Members of the Office of Civic Engagement also raised concerns with a potential commercial linkage fee, saying that the study ordered by the ordinance must prove that there is a clear “linkage” between the fee imposed and the behavior that the fee aims to address. Otherwise, they claim, imposition of such a fee may not be legally sound.

They said an example of a typical linkage fee is a tax on a new development that causes increased traffic, which would go toward paying for widening nearby roads to decrease traffic.

The Obama Foundation’s hope of breaking ground for the Center by the end of this year faces other obstacles.

An environmental activist group called Protect Our Parks filed a lawsuit against the city and the Chicago Park District, accusing them of violating their obligations as trustees of public parkland by allowing the Obama Foundation to construct the Center in Jackson Park. The suit was dismissed last month, but will be appealed with the help of a UChicago law professor.

The Center’s construction also faces a federal review, as Jackson Park is on the National Register of Historic Places, a list of areas and buildings that the U.S. government deems historically significant enough to deserve federal preservation.

The study was commissioned by the CBA Coalition, which staged a rally the day the study was released.

CBA Coalition Protests Rent Increase, Hairston Warns It Not To “Deceive the Public”