Alexey Galda’s analytical mind and passion for flying make him a force on the wingsuit flying world stage. 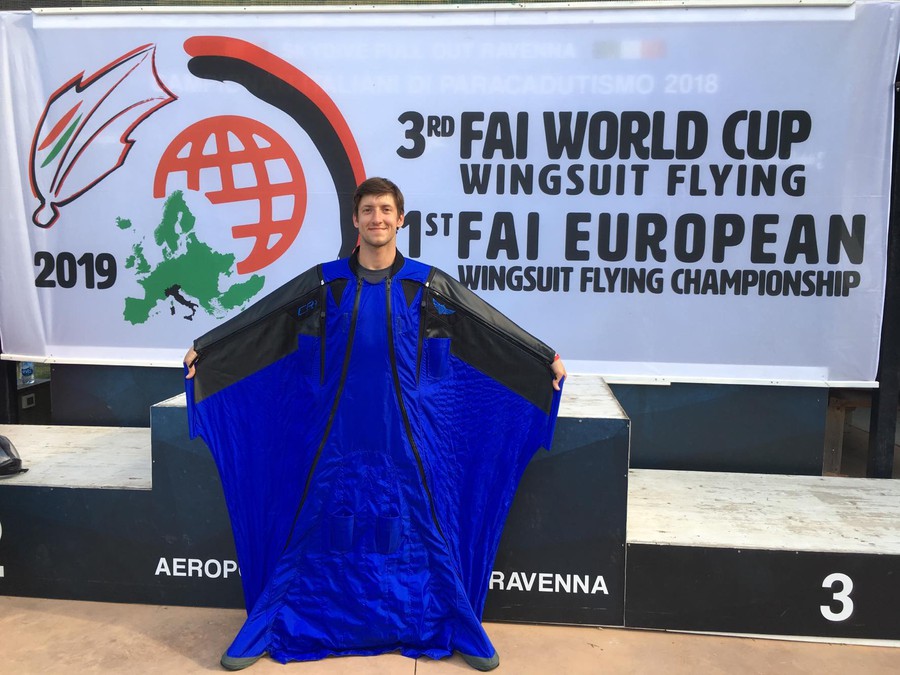 Alexey Galda in his competition wingsuit at the World Cup.

The jump is automatic, and the sight of the ground 12,000 feet below is nothing but routine. Alexey Galda focuses on the details of flight: the resistance of the air against his wingsuit, landmarks below to orient himself, and the angle needed to guide his body along the flight path.

Theoretical physicist and assistant professor Galda placed sixth in the Performance division at the FAI World Cup of Wingsuit Flying last month in Italy. In the team competition, Galda captained the United States to a first-place finish.

Wingsuit flying requires athletes to wear a bodysuit made of a fabric that adds webbing between the flyer’s legs, as well as between their arms and torso, to provide the body with adequate lift to fly through the air. Wingsuit flyers compete in either a performance division, with the goal of maximizing the distance flown, or an acrobatic division, where flyers are judged on stunt and trick performance while in the air. 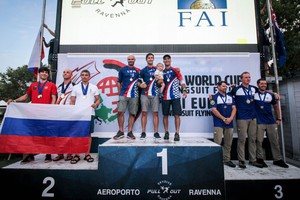 Before he found wingsuit flying, Galda practiced aerodynamic sports such as kite surfing, paragliding, and speed flying. “Once I got into skydiving in 2013, flying my own body became my primary goal,” he said. “United States Parachute Association (USPA) requires at least 200 skydives before one is allowed to fly in a wingsuit, which took me two years. Once I reached the 200-jump mark, I could not wait to start wingsuit flying.”

Galda’s available devoted wingsuit flying time is confined to an occasional weekend. He makes between 100 and 200 jumps a year, ten being the maximum number of jumps one can do in a day. During the week, Galda assumes his main role as a theoretical physicist. His research currently focuses on bringing quantum computers and communication closer to reality. He uses advanced analytical and numerical methods to better understand the complex and often counterintuitive physics of quantum processes.

An understanding of physics has helped Galda optimize his training.

“With the extremely limited amount of time I can devote to this hobby, I had to come up with a way to train more efficiently,” Galda said. As a solution, Galda developed his own software to analyze flight data. The software allows Galda to make informed adjustments to his flight technique by simulating different flight parameters, using artificial intelligence to analyze GPS data, and objectively analyzing his flight performance.

The same year Galda became eligible to start wingsuit flying, the USPA announced that the first National Championships in wingsuit performance flying would be held in the Chicago area, at the place Galda practices, Chicagoland Skydiving Center. By October 2015, Galda became the USPA Champion in the Intermediate category.

“After that point, the path was clear to me—I wanted to continue my progression and move to the Advanced category, where people fly in the largest wingsuit that provide the highest gliding performance,” Galda said.

Divisions separate competitors by the size of their wingsuit. Larger wingsuits have an increased surface area directly exposed to the airflow, making them more difficult to control.

Performance wingsuit competitions are graded in three main areas: total flight time, horizontal distance, and average speed. GPS loggers are attached to wingsuits to record flight data, which are then compared to determine a winner.

Training for wingsuit flying does not require a typical cardio or weight routine to be successful.

“We’re not very great athletes outside of wingsuit flying,” Galda said, noting that if strength training is incorporated into a wingsuit flyer’s training, it should be focused on the shoulders. “The internal pressure inside those wings helps to keep it rigid, but it’s still very physical on the shoulders.”

But flying does require mental preparation, Galda said. The 20 minutes it takes for flyers to reach jumping altitude is a crucial time for flyers to prepare themselves mentally for the jump.

Before a jump, Galda is not thinking about the distance to the ground below or the first step off the plane; rather, he uses the time in the plane to think about the path he must take once he jumps.

“I pull out my phone and I have some maps, and I look—okay, I need to fly over this house, this corner of the lake, this field, this road,” Galda said. “In the plane, typically what I worry the most about is not performance, because that is muscle memory. Navigation is what you need to think about because there could be a cloud in the way, so you don’t always see the entire row.”

Galda has designed his own mobile map application that overlays his flight lane, which he must stay in while flying, on top of an image of the whole landscape visible from the plane. The map also shows the lanes of other flyers in the plane, so he can ensure he does not veer into their lanes. 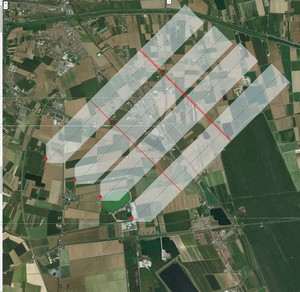 One of Galda’s most memorable competition flights was at the 2017 FAI World Cup, hosted in Overton, Nevada. Galda had one jump left and was in contention for second place in the world if the final jump went well. While in the air during that final jump, Galda knew it was probably going to put him in second—and it did.

“I started yelling, screaming, it was a crazy experience. I still had to land, but I didn’t care about it.”

Wingsuit flying is a relatively tight-knit community, with only about 100 active wingsuit athletes in the world, according to Galda. Competitions are an odd mix of saying hello to old friends while simultaneously battling them in a highly competitive event.

“Every event like this is a big challenge, both physically and mentally. However, it is also a great opportunity to see good old friends from all over the world, from Russia to Australia, and meet new talented pilots,” Galda said. “With our community being so small, the general atmosphere is extremely positive and friendly, despite the extreme competitiveness of top athletes.”