With a Month to Go in Iowa, UChicago for Bernie Sanders Starts Final Push with Midway 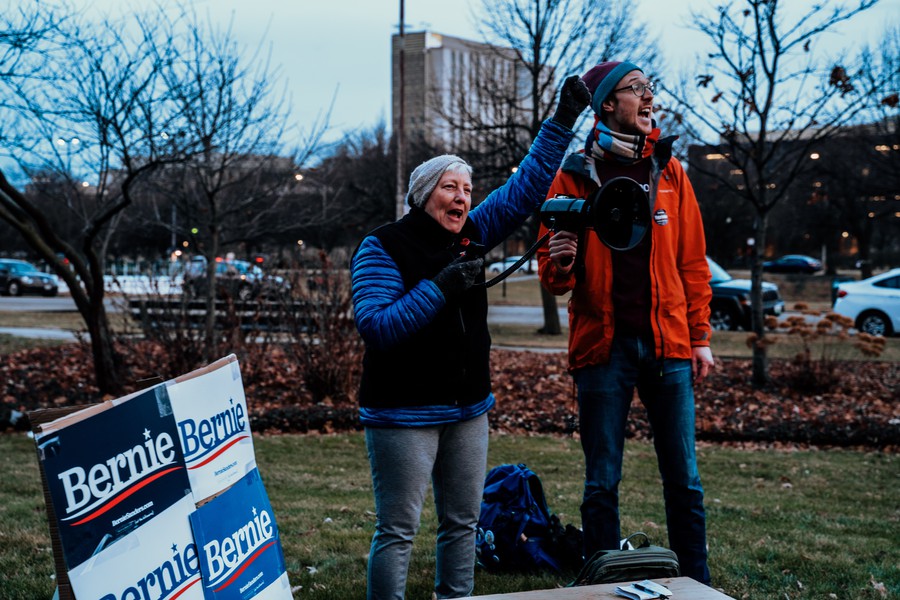 On Thursday, UChicago for Bernie Sanders held a rally on the Midway to kick off its last frenetic month of organizing for Democratic presidential candidate Bernie Sanders as the clock ticks down to the Iowa Caucuses on February 3. An organizer estimated that about 50 people were in attendance, with more people joining the crowd as the event went on.

With Sanders picking up points in first-in-the-nation Iowa, the rally’s organizers told The Maroon they hope that the afternoon’s event will spark the momentum Sanders needs to place well in Iowa, the primary, and the upcoming general election.

The rally focused on Sanders’ engagement with worker movements, including UChicago’s Graduate Students United (GSU) and the threat of war with Iran. The event featured a number of GSU-affiliated speakers, candidate for IL-7 congressional seat Anthony Clark and a student veteran at the University of Illinois at Chicago.

James Skretta, a graduate student in the music department and a member of GSU, welcomed those present and asked them to think of themselves as workers at the University.

“You are a worker the day you set foot inside of a classroom in any country that you live in. This education system is designed to make you work. So, when you put your pen to paper, when you make a keystroke at the University of Chicago, what are you doing?” Skretta asked the crowd. “You are generating capital for our beloved institution over here! You are workers!”

Skretta also discussed problems with the healthcare system before he invited Clark to take the megaphone. Clark, in light of the escalating conflicts with Iran, focused on his experience of serving in the military to pay for school and other basic expenses, saying that such choices are common among low-income people with limited options for employment.

Of Sanders’ opponents, Clark said, “They say that healthcare is a human right, they say childcare is a human right, but then they follow it up with language of choice and options. Those are languages and tools of the oppressor. What choice or options do individuals really have in struggle?”

“Understand the importance of this movement. There’s no other option besides Bernie,” Clark said. “You cannot defeat capitalism with more capitalism. You cannot reform a broken system.”

Kit Ginsky, an organizer of UChicago for Bernie Sanders, spoke next. Ginsky connected last spring’s GSU labor action to Sanders’ longtime support for the labor movement and called for unity among potential Sanders supporters regardless of their backgrounds.

“We all need to stand together, whether we went to the University of Chicago or the school of hard knocks,” Ginsky said. “This is not a time for a pinky promise, this is not the time to mourn, it is the time to organize.”

Noah Zeldin, a member of GSU, the German Department, and the group Socialist Alternative, reminded the crowd of Sanders’ show of support for UChicago’s GSU last spring and declared that GSU will succeed if Sanders does.

“The members of the billionaire class are ruthless and will stop at nothing to protect and increase their wealth and power. A Sanders victory is a step forward on the path we all share,” Zeldin said.

Zeldin told the crowd that he had recently submitted a proposal to GSU that the organization formally endorse Sanders in the 2020 primary. After his speech, Zeldin told The Maroon he was unsure as to how the organization would decide to process his suggestion—whether by a vote, a discussion on leadership, or otherwise.

The organizers are planning to capitalize on Sanders’ rising status in early-state polls with canvassing trips to Iowa and weekly phone banks.

“This weekend, we’re taking 45 people to Iowa from Chicago. I think after the break, a lot of people came back to campus coming off of Bernie’s surge, there’s a lot of momentum. We just had our biggest phone bank ever,” Ginsky said.

“People are starting to pay a bit more attention now in a place like Illinois that doesn’t vote until March 17,” Skretta added.

Ginsky and Skretta see the increasing manpower of the Sanders campaign as the key to a victory in Iowa, as well as in the primary and the general. They see their job as facilitating Chicago students’ involvement in the Sanders ground game.

“When Bernie wins, it will be because the campaign has structured itself and organized itself to accommodate the huge influx of volunteers that have been activated by the campaign’s momentum,” Ginsky said. “We want to see as many young people from Chicago as possible to participate in that, and if we can be a conduit to connect people to the campaign and this work, that’s really what we’re here to do.”