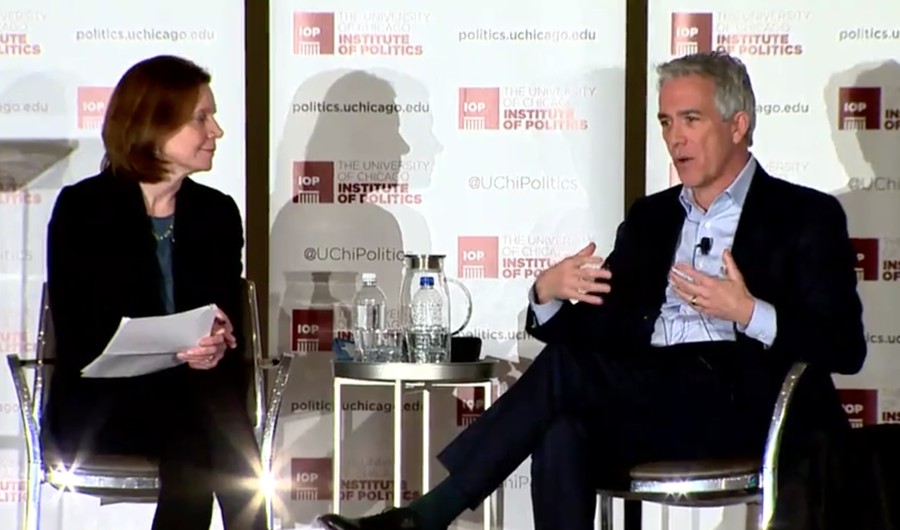 Joe Walsh speaks at the IOP

At a discussion in Ida Noyes Hall on Wednesday night, Republican presidential candidate Joe Walsh (M.P.P. ’91) discussed Donald Trump’s presidency and the effect that it has had on Republicans throughout the United States, while also praising Minnesota senator and Democratic presidential candidate Amy Klobuchar. He was interviewed by Monica Davey, the Chicago bureau chief for The New York Times.

Walsh, a graduate of UChicago’s Harris School of Public Policy, unsuccessfully ran for public office twice during the 1990s before winning the U.S. House of Representatives seat for Illinois’s 8th district in 2010. However, Walsh served only one term, losing to Senator Tammy Duckworth in 2012. Since leaving Congress in 2013, Walsh has had a career in conservative talk radio, and his program, The Joe Walsh Show, became nationally syndicated in 2017.

Throughout the 2010s, Walsh was closely affiliated with the Tea Party movement, a political movement focused on fiscal conservatism and right-wing populism. Despite supporting current president Donald Trump in the leadup to the 2016 presidential election, Walsh has opposed Trump since the summer of 2018, which prompted him to launch his presidential campaign in August 2019.

At the IOP event, Walsh began by discussing upcoming steps for his campaign, saying, “We’re going to Iowa tomorrow,” and with Trump as the incumbent president, “it’s a battle to get attention, to get people to notice this race.”

One additional difficulty for Walsh and other Republican challengers running against an incumbent president is that the Republican party is not required to even hold a primary or feature the challengers on the ballot in every state. As a result, Walsh said that while he expects to be on the ballot in 35–38 states, certain states, such as Illinois, will not include him on the ballot.

“Right now, in nine states, Republicans will not be able to vote for president…. It’s wrong,” he said.

Walsh was also heavily critical of Trump throughout the talk, repeatedly calling Trump “unfit” to be president. On the topic of Trump’s impeachment last month, Walsh said, “I think he needed to be impeached…. I think he ought to probably be removed from office.”

When Davey asked whether there was any particular incident that caused Walsh to begin to reverse his original support of Trump, Walsh said, “Helsinki in 2018, when he said, ‘I stand with Putin and not with my own people,’…that was the final straw.” Walsh was referring to the July 2018 summit between Trump and Russian president Vladimir Putin in Helsinki, Finland, after which Trump said that he believed Putin’s claim that Russia played no part in interfering with the 2016 U.S. presidential election.

Walsh also criticized Trump personally. “I think our political system is broken…. The problem is, Trump’s a horrible human being,” he said. Walsh also discussed Trump’s repeated lies to the public as a reason that he ceased to support Trump, saying, “More and more and more, it was his dishonesty.”

Prior to and during his presidential campaign, Walsh received criticism for racist and incendiary statements, including Tweets related to “birther” conspiracy theories regarding Obama’s citizenship status. When asked by Davey about racist claims that he had made in the past, Walsh said, “I stepped over the line several times. I said ugly, personal things…that I feel bad about. All I can do is own what I said, apologize where it’s worthy.”

Walsh added, “Some of my rhetoric helped lead to Trump, and I have to live with that.”

He was then asked if there are any particular people to which he would like to apologize, to which Walsh replied, “President Obama would be on top of that list.”

Walsh also repeatedly said that, during his campaign, he has found that support for Trump among Republicans has decreased: “70–80 percent of Republicans I’ve met in Iowa have told me privately, ‘I like some of the things [Trump] has done, but I can’t take any more of this chaos.’”

Walsh also criticized fellow Republicans for failing to voice criticism of the president, suggesting that it may be out of cowardice or fear: “I don’t think I can say the word ‘chickenshit,’ but if I did, I’d be talking about Republicans like Marco Rubio, Ted Cruz, Nikki Haley…. They’re not afraid of Trump, they’re afraid of Trump voters if they stuck their neck out like me.”

Walsh also suggested that he may be willing to vote for a Democrat if it means helping to vote Trump out of office, saying, “I would rather have a socialist in the White House than Donald Trump.”

When asked which of the Democratic candidates running for president this year he preferred, Walsh named Senator Amy Klobuchar. “If I could pick Amy Klobuchar to be president tomorrow, I would.”