The group is preparing to connect interested students to Democratic campaigns. 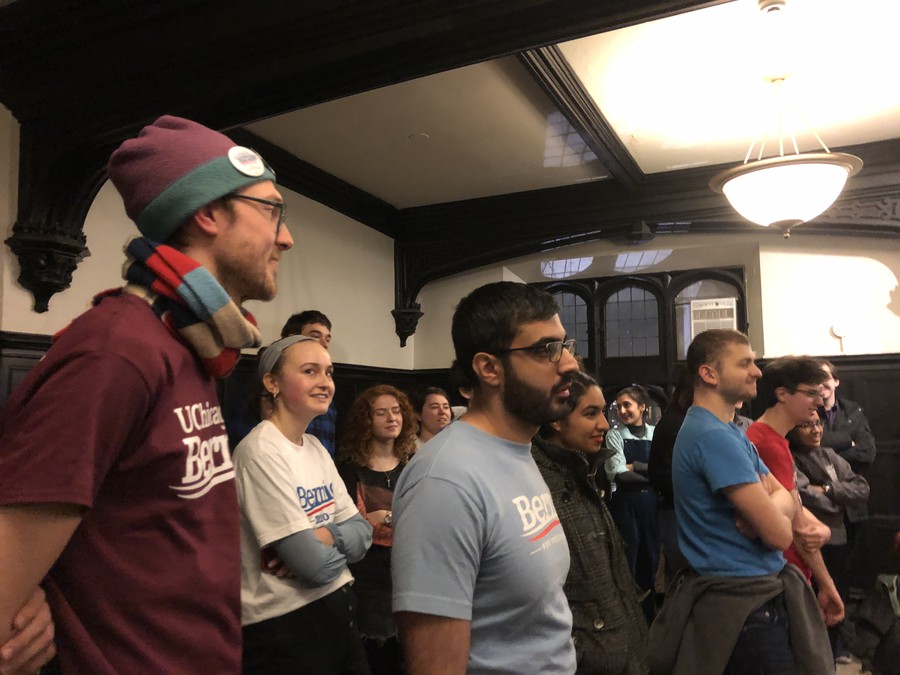 The University of Chicago Democrats (UC Dems) are preparing to facilitate canvassing, door-knocking, and organizing for UChicago students up and down the Democratic ballot as the Iowa caucuses and Illinois primary approach.

In an interview with The Maroon, UC Dems Secretary Lauren Cole, Communications Director Andy Hatem, and Operations Manager Daniel Green discussed the organization’s plans for Iowa, Illinois, and beyond.

UC Dems’ organizational policy prohibits official endorsements in primary races because the group’s membership draws on different parts of the Democratic coalition that often disagree with one another. Hatem said that while about a quarter of the group’s active members were involved in “UChicago Students for” organizations, many more were engaged with a particular figure in the 2020 race.

“We don’t endorse, but our members might have preferences, and we will make it easy for people to get involved,” Hatem said. Once there is a nominee, UC Dems plan to assist the candidate via campus outreach and organizing.

Green said that UC Dems does not anticipate arbitrating problems or major disagreements between campus candidate groups as the historically large and contentious primary process progresses toward its conclusion.

“I don’t know if we necessarily have a role right now, because that’s the nature of the primary process—people are going to disagree. What we’re going to be important in is the old saying, ‘vote blue no matter who.’ Our priority is electing Democrats, and whoever wins the primary is going to need an on-campus organization, and that can be us,” Green said.

In the meantime, UC Dems is planning to take interested students to Iowa the weekend before the caucuses (February 1–2) and connect them with campaigns to help canvas. They will do the same in the weeks before March 17, the date of the Illinois primary.

In addition to the 2020 national elections, UC Dems plans to send assistance to a number of state and local-level campaigns for different representatives using the same tactics as they did in 2018, when the group turned out over 100 canvassers for different races in Illinois.

“You can get a lot done on the back of a presidential campaign turning out voters, and that means [assisting] progressive candidates running for state representatives and state Senate seats,” Hatem said.

“It makes sense that they wouldn’t use us as a tool this early on because there’s not much we can do to help them,” Cole added.

University-affiliated groups, or Registered Student Organizations (RSOs), are subject to certain rules on political involvement because they receive University money. This is one of the reasons that UC Dems have not engaged heavily with any campaign thus far, especially when organized groups for each candidate are interfacing with them instead.

“Because [the candidate groups] aren’t RSOs, they can do a lot more engaging directly with the campaigns than we can. We aren’t supporting any candidate; we are just taking people to Iowa. We’ll be reaching out to campaigns when we go to Iowa to make sure that people have places to canvas in,” Green said.

However, 53 people came to participate in the “mock-us” Monday night, with representation from most of the candidates still in the field for the Iowa Caucuses. Vermont Senator Bernie Sanders (AB ’64) had the most support, taking 47 percent of the room, while Massachusetts senator Elizabeth Warren came in second, with 36 percent.

Going forward, Hatem, Green, and Cole said that the group hopes to provide a forum for students to hear more about the remaining primary candidates, and will be hosting a meeting where groups can pitch their upcoming opportunities to garner support for their candidates at different events, on trips, and through outreach initiatives.