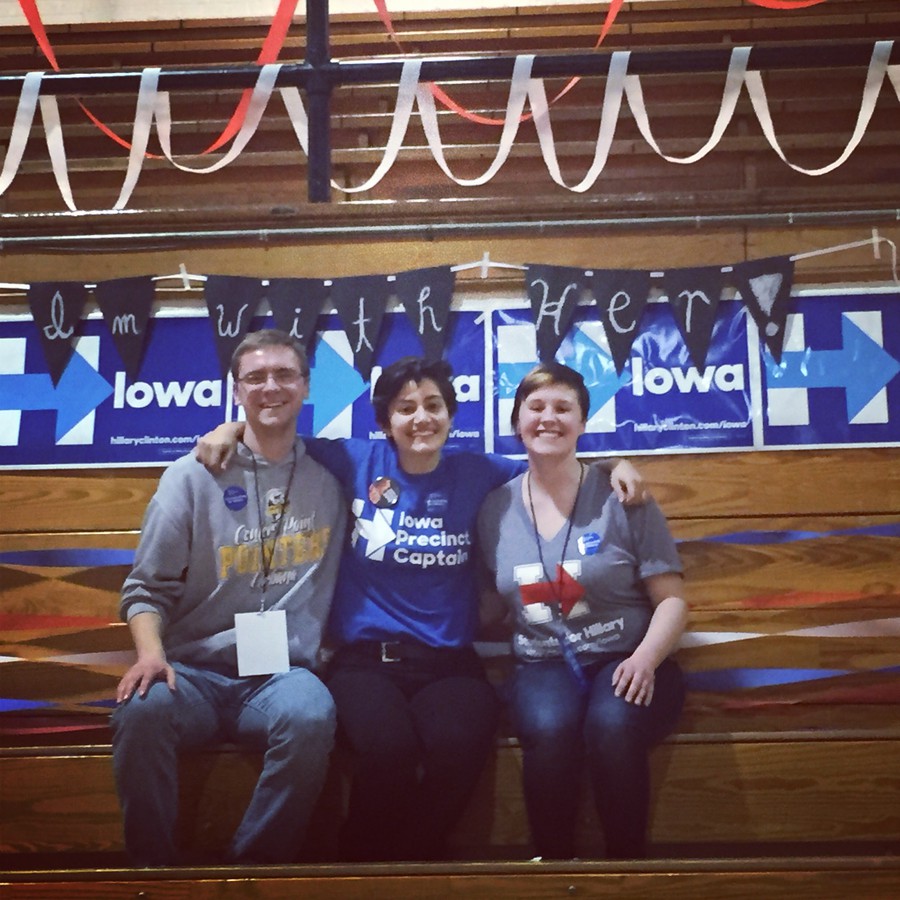 Hannah Gregor, right, and friends at a caucus in Iowa in 2016. Gregor is a graduate student coordinating a remote Iowa caucus at University Church in February 2020.

As excitement builds among Democratic primary voters for the 2020 Iowa Caucuses next month, two UChicago graduate students decided to bring a piece of the first-in-the-nation event to Hyde Park. The satellite caucus will take place at University Church on February 3 at 7 p.m.; registered Iowa Democratic voters who would like to participate must pre-register for the event by Friday, January 17.

The Iowa Democratic Party (IDP) approved a total of 110 satellite caucus locations this election cycle. The UChicago site is one of 21 locations on college campuses, according to a press release from December. The IDP said that the total number of attendees at each satellite site on caucus night determines the number of delegate equivalents from that site.

The IDP decided to begin hosting satellite caucus sites after a 2017 DNC report required caucuses to provide a way to include voters who could not attend the weeknight events, which are often hours-long and at a fixed location. While the IDP initially wanted to host digital or call-in caucuses, the DNC disapproved of the plan because of security concerns.

James Skretta, a third-year Ph.D. student in the Music Department, and Hannah Gregor, a first-year graduate student at the School of Social Service Administration, both grew up and attended college in Iowa; while in school, they participated in the caucuses for the first time during the 2016 presidential election.

Gregor will be a caucus leader at the UChicago location. In 2016, she ran a student location at the University of Northern Iowa.

The satellite location will run just like the caucus locations in Iowa: voters in attendance will divide into groups to show support for candidates. The viability of each candidate is determined by receiving support from 15 percent of voters in the room. Any voters whose candidate is deemed inviable will then have the opportunity to realign themselves with a viable candidate. The caucus leaders will then tally the final support for each candidate.

Gregor is excited to have Iowans in Chicago come together for the event. “I think it’s one of the few moments where you really feel like you’re really participating in democracy… it’s a very intimate experience in a way that sometimes voting isn’t,” she said.

Skretta, though he helped arrange the location of the remote site, will be driving back to Iowa for the caucuses. He noted that out-of-state college students or other Iowans are often unable to attend the event due to other conflicts, which makes satellite caucuses an important way to include more voters.

“It’s really important that they have the opportunity to cast their vote,” he said. “In the same way that in a presidential election you can get an absentee ballot; in the same way that for so many states that have primaries you can get absentee ballots. It only makes sense that people who are not able to be at that site… can make their voice heard in this voting process.”

He went on to explain that he believes the addition of satellite caucuses will provide a more representative election result in the state, emphasizing the potential impacts of these locations. “One of the reasons that I am especially excited is that it could be the deciding factor in who actually wins the caucus overall,” he said.

Both Skretta and Gregor have publicly endorsed candidates on social media; however, Skretta wanted to highlight that there will be no candidate bias in running the University Church site.

Skretta also wanted to stress that the location is not exclusively for UChicago students, as he hopes more Iowans throughout Chicago will register to caucus at University Church.

24 Iowans came out to the Hyde Park location to declare their support for candidates in the 2020 Democratic Party presidential primary.