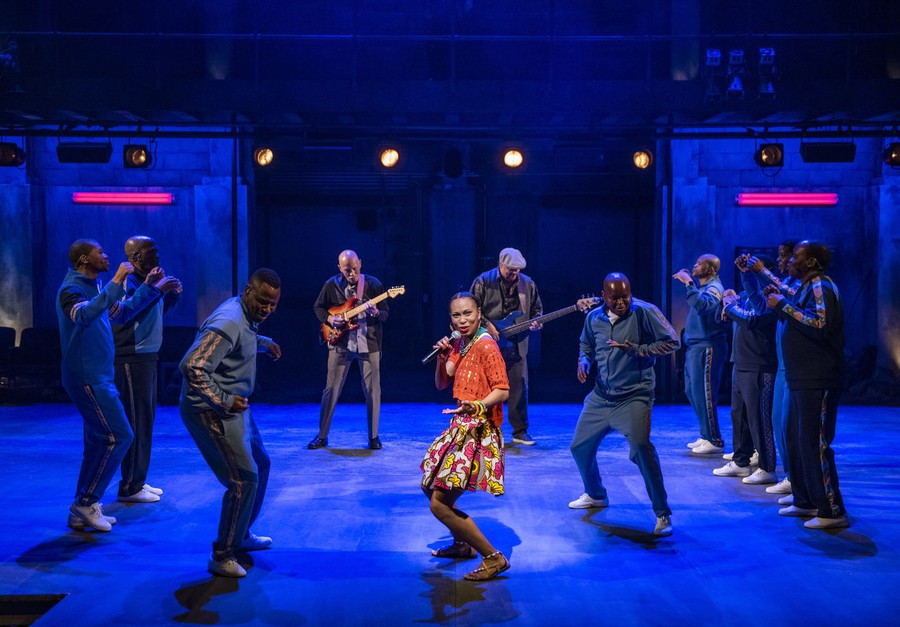 Instead of digging deeply into any of the struggles that Lindiwe or her boyfriend experience, the ensemble opts for broad gestures at themes like human growth, family, and resilience.

Steppenwolf’s most recent collaboration with the a cappella group Ladysmith Black Mambazo, Lindiwe, is full of circles. Life, death, language, human experience, it says, are all a series of cycles in which one grows through the things they pick up along the way. Unfortunately, the audience also leaves the show feeling like someone has made them run in circles for two and a half hours—without picking up anything along the way.

Lindiwe is a collaborative memory play detailing the life of the titular South African singer (played by Nondumiso Tembe), focusing on her tumultuous relationship with her deeply unlikeable boyfriend Adam (Erik Hellman), with whom she falls in love while he is drumming at a blues show in Chicago. The two struggle to navigate a relationship that bounces between South Africa and Chicago. Throughout the course of the play, we learn that Lindiwe has been sent to a locale of the afterlife presided over by the Keeper (Yasen Peyankov), who is prone to fits of attitude and loathes Lindiwe’s constant singing; as she retells the story of her journey, he requires that she not sing at all. This plot device is a true loss to the content of the play, as the show is at its best when Ladysmith Black Mambazo and Tembe’s harmonious stylings are put front and center.

This tension points to the central issue with Lindiwe. The play tries to maintain an ensemble piece throughout, and the show incorporates a wide range of viewpoints—from Chicago, from South Africa, from the underworld—that never quite seem to match up. Eric Simonson’s writing remains overly expositional throughout: Lindiwe at one point explains to the audience the concept of suspending their disbelief. Additionally, instead of digging deeply into any of the struggles that Lindiwe or her boyfriend experience, the ensemble opts for broad gestures at themes like human growth, family, and resilience.

It also doesn’t help that, with the exception of Tembe, few of the actors seem to adopt a coherent energy throughout the piece. Tembe’s Lindiwe is consistently bursting with life and joy, and Cedric Young and Jennifer Engstrom do formidable jobs setting the scene in their supporting roles in a variety of settings from a hospital in purgatory to Chicago’s own Kingston Mines. Hellman’s character, on the other hand, is meant to be read as a sympathetic figure, but comes across as deeply unlikeable and selfish throughout. A highlight of this dynamic is when Lindiwe is caught by immigration authorities and deported, and her boyfriend repeatedly demands that she return to America without documentation to be with him as he pursues a semi-successful audio engineering career. No matter how true this depiction might feel to the selfish whims of 20-somethings, it does not good theater make, and Adam hardly feels like an adequate herald of Chicago. Peyankov’s Keeper also lacks a strong character profile—the character’s bold costuming and makeup are camp to the extreme, but the writing seems to err towards an immediate vulnerability that makes the show difficult to enjoy. Ladysmith Black Mambazo is energetic and vocally engaging, but in the moments they are asked to act, are much less convincing.

The design elements of Lindiwe are beautiful at moments—lighting designer Marcus Doshi’s use of saturation is greatly appreciated against the otherwise colorless scenic design, which apparently features an abandoned theater with a mezzanine level. The theater itself feels like a gesture that is simultaneously overly ornate and generic—it’s unclear why this is even the setting at all. Transitions between the two levels of the set are inconsistent—the microphones are mixed differently between the two levels, creating odd, thematically inconsistent echoes when an actor switches levels, and an unruly spiral staircase hinders otherwise fluid staging.

Despite its flaws, Lindiwe’s music soars, and might be a good fit for families looking for a break from the usual Christmas Carol–Nutcracker holiday season. However, if one is looking for a deep dig into blues subculture, South African culture, Chicago culture, or an example of expertly-devised theater, Lindiwe disappoints.