Marchers were drawn to the event for a variety of political issues including climate change, reproductive justice, and to protest the Trump administration.

By Avi Waldman   and Caroline Kubzansky 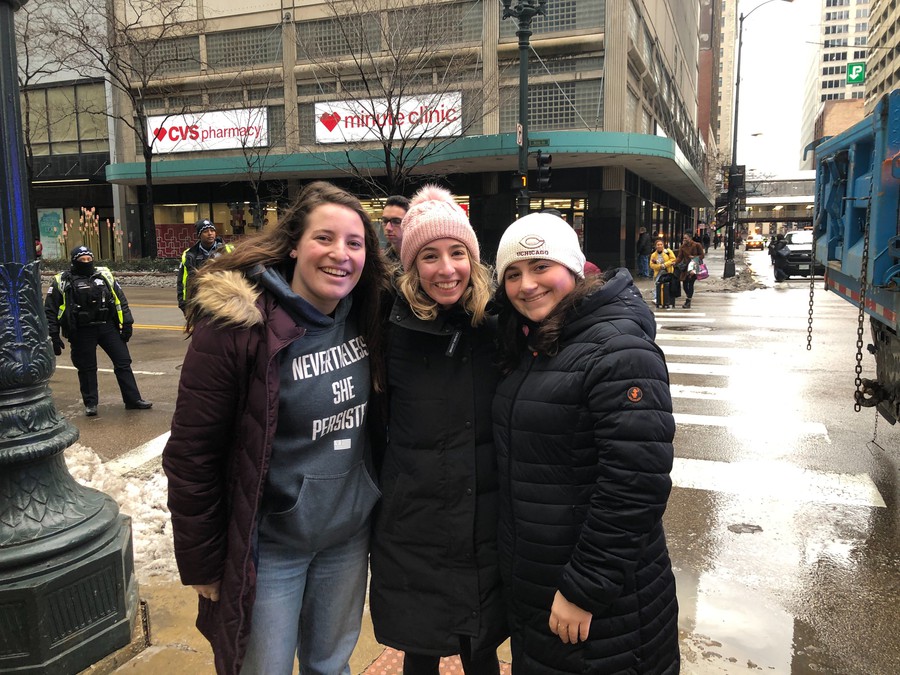 Students from the University of Chicago, Loyola University Chicago, Northeastern Illinois University, and DePaul University were among the estimated 10,000 attendees for Saturday morning’s Women’s March. The marchers attended in support of a range of different causes, including climate change, indigenous rights, and reproductive justice. Some marchers did not arrive in support of any particular issue, but out of a desire to “do something” and participate in an annual mass demonstration against the Trump administration.

UChicago undergraduates Anya Edelstein, Zoe Benjamin, and Meghan Bonnistsaid that they were in the Loop for the march to contribute and increase public recognition of the diverse issues that marchers supported at the event.

“For me, goingto the Women’s March is the one thing I make sure I do every year because it’s something that’s really important to me, and even though it’s not super involved, it’s one thing that I can do to continually show my support,” Edelstein said. Benjamin said that she had been interested in taking action through RSOs that addressed issues like climate change but was frustrated that climate action student organizations often did not extend far beyond campus.

“A lot of the clubs I checked out around it were very interested in talking about the theoretical parts of it—having the conversations—but they didn’t seem to do a lot. I like doing things. So that’s why I’m here,” Benjamin said.

Bonnists aid that for her, joining the march was consistent with her efforts to be more politically engaged this school year.

“We’re just here to show our support. For me, at least, this school year I needed to kind of ramp up, but it’s definitely not the first or the last thing I’m going to be doing,” Bonnist said.

Edelstein added that coming to the march was a way to act on her values, even on a limited budget.”

Women’s rights, and especially concerning healthcare and Planned Parenthood is something that affects everyone, and doing what we can—we’re college students, we’re not going to donate a ton of money—but doing what we can to go out there and show what matters to us is important,” she said.

For many of the college-aged and younger marchers, climate change was one of the foremost issues motivating them to act. A high school chapter of the Sunrise Movement, an environmental advocacy organization focused on youth action, brought banners and megaphones to demand the government declare a climate emergency. Cassidy Redding, a second-year majoring in environmental science at Loyola University Chicago, explained that her work in the classroom had energized her to get politically involved to push for action on the climate crisis.

Amanda Stocchetti and Sarah Sciaraffa, fourth years at DePaul and Northeastern Illinois University, respectively, came to the march wearing beanies printed with Juno4Me, a nonprofit that disperses contraception to students around Chicago. Stocchetti, who interns at Juno4Me, said she came to the march to support the necessity of access to birth control.

“Reproductive healthcare is a basic human right, and it needs to be protected,” Stocchetti said. Representatives of National Nurses United, the national nurses’ union, also attended the March, including a contingent of nurses from the University of Chicago Medical Center (UCMC). UCMC nurse John Hieronymus explained how the Women’s March ties into the union’s activism following a successful strike last fall.

“The Women’s March is a response to the broader issues of misogyny and sexism within the country and as a union that is primarily made up of women we understand that union rights are women’s rights and that oftentimes unions are the only way women can effectively fight back against discrimination, against harassment, against wage disparities,” Hieronymus said. “We want to emphasize how important unions are to making the world a better place for women.”