"S is for Soul Sister" Remembers a Forgotten Alphabet

Molecular biologist and photographer Okunola Jeyifous rediscovers the story and people behind the “Black ABC’s” flashcards with the UChicago Arts incubator staff in his exhibition "S is for Soul Sister" on display now until March 20. 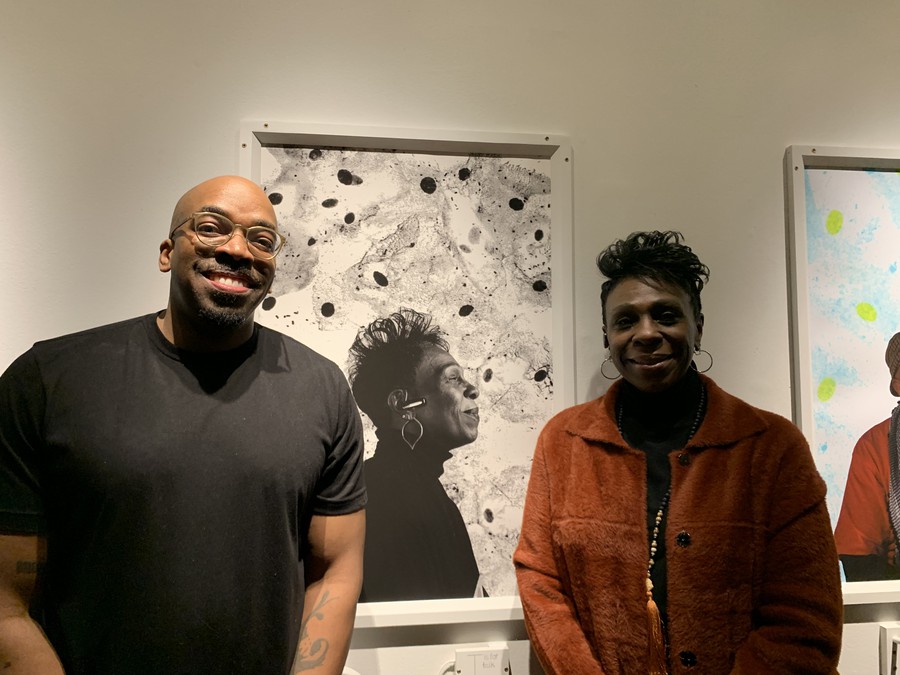 Jeyifous and Reese stand together at the opening of "S is for Soul Sister."

When photographer and UChicago assistant professor of neurobiology, Okunola Jeyifous, began working with the Arts + Public Life (APL) initiative at the UChicago Arts incubator, he knew that he and his team should combine his love of science and visual art in a South Side–based photography project. The opportunity to bring all their ideas together arose when they met with a woman known by students across America as “T is for Talk.” That woman’s name is Cheryl Reese.

In the 1970s, Reese grew up in the Harold Ickes Homes, a public housing project in Chicago’s South Side, where she was selected as a participant in what became known as the Black ABC’s. The educational alphabet flashcards that featured Black children and become a staple in classrooms across America were created by two teachers, June Heinrich and Bernadette Triplett, and published by Chicago’s Society for Visual Education.

Now, 50 years later, Jeyifous has revived the spirit of the Black ABC’s in his first solo exhibition, S is for Soul Sister, at the UChicago Arts Incubator.

“It was great to see this revamped because it was initially a learning tool for African-American children in the ’70s to identify with themselves and to see people that looked like them who are learning and teaching them,” Reese told The Maroon about the project.

Six of the original Black ABC’s participants were photographed for the exhibition. Combining his passions for science and visual art, Jeyifous took cheek cell samples from those photographed, then stained the samples with the goal of “[creating] these visually tapestries using their cells that I could meld with their regular portraits.” In addition to the visuals, the APL team recorded the photo subjects’ oral narratives of growing up in the Harold Ickes Homes.

The APL research team who organized the exhibition, including Isis Ferguson, Gabriel Moreno, Brett Swinney, Hannah Jasper, and Nadia Sulayman, initially thought there would be an official record of the cards, but quickly realized that no such documentation exists. The group began to search for participants through Reese and found a 50-year-old network of childhood friends who allowed the team to connect narratives and paint a larger picture of the community in which the participants lived.

“That was the beauty about the research, each level brought about this new revelation about their experiences, but also led into the next step of the project,” Swinney said.

Reese emphasized the camaraderie of the Black ABC’s participants in the housing project, saying, “It was a community. It was a neighborhood of people who loved each other, who loved being Black and were proud to be Black.”

At the exhibition opening last week, Jeyifous and the APL team had the opportunity to meet more people who were involved in the Black ABC’s, and now hope to further expand the project. Ferguson announced that APL will be creating an online repository of stories to add more narratives and create a larger project in the future.

As the associate director of City and Community Strategy at APL, Ferguson was keenly aware of the impact the project has in representing not only the stories of the Harold Ickes community, but celebrating a universal theme about Black culture.

“It’s pride around Chicago continuing to be a clear epicenter of Black cultural production,” Ferguson said. “They tell such a unique story, and even in their uniqueness there’s a level of relevance that they were quickly adopted and put in all these schools. It means that something about Chicago can resonate all across the country.”

Jeyifous’s favorite part of the projects was listening to the stories of the people he photographed. Beyond the major events of the community, he enjoyed hearing the firsthand accounts of everyday life directly from the participants; this is something he hopes viewers will take away with them as they view and hear his work.

“What I wanted the art to express was that when you are taking into consideration people, where they live, and access to certain things, you have to have them centered in that conversation,” Jeyifous said. “So this is a way to address that and put them at the forefront of their own stories.”