Walking Around In the Waiting Room 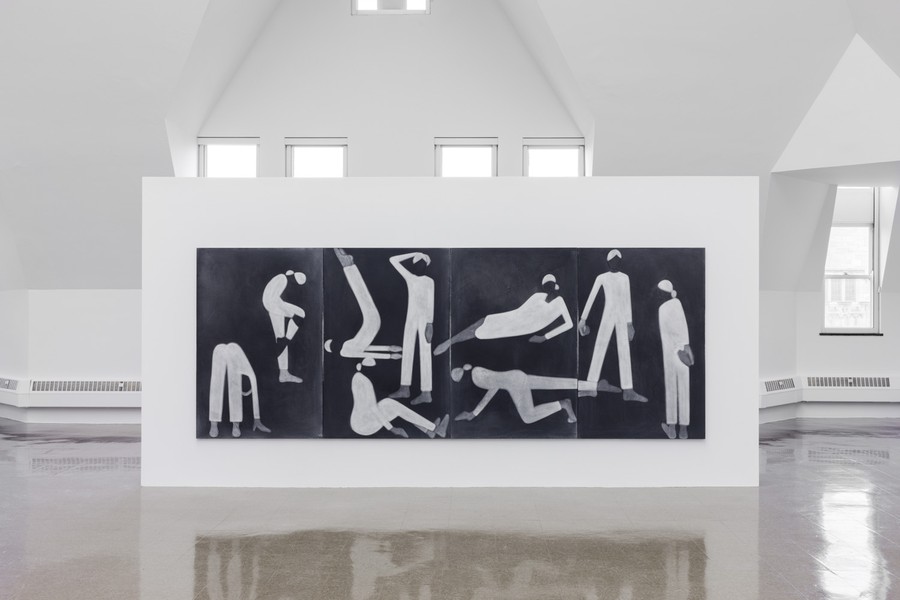 "In the waiting room" is on view through March 29th at the Renaissance Society.

A first impression might conjure up the word “austere,” or thoughts of a waiting room located outside of time and color, where the only sensations are of the Renaissance Society’s cold white walls subtly blued by winter light, mingling with the warm scent of plywood. Six rectangular canvases are erected in such a way that when the viewer faces one—if not standing sufficiently close enough—she is forced to address the other from the corner of her eye.

Born in Germany in 1970 and currently based in Los Angeles, artist Silke Otto-Knapp graduated from London’s Chelsea College of Arts in 1996 with a master’s in fine arts and has since been featured in both individual and group exhibitions across Europe and the United States.

In some ways a departure or evolution from her previous works, Otto-Knapp’s most recent exhibition, In the waiting room, features paintings of monochrome figures intertwined in dance, alongside her more traditional landscape scenes. But the boundary between the two sometimes appears as blurry and dreamlike as the scenes she depicts; examining the thin-limbed figures of Group (moving) and Group (reaching), one cannot help but be reminded of forest branches wavering in the breeze or bristling sedge. But then, one only need turn to Screen (Trees and Moon) and Forest to recall a more traditional distinction between the human figure and the body of nature; in the former, nature is represented in abstract, geometric constructions, more rigid than the contours of Otto-Knapp’s dancing forms. In Forest, however, the boundary between human figures and bodied nature is less distinct; the figures bend in work or ritual upon a backdrop of trees, but it is up to the viewer to draw the true distinction between flora and fauna, a culminant exercise in gestalt.

Working primarily with watercolor on canvas, Otto-Knapp constructs her paintings through repetitive layering and washing off of paint, not only bringing out a subtle gradation in tone, but also emphasizing the texture of the canvas itself. In the end, the viewer confronts paintings several feet high and wide, made all the more imposing by the plywood constructions that prop them up. Except for Screen (Trees and Moon), all the works are traditionally mounted; Screen, however, is as its name describes. As a screen of linked canvases, it invites the viewer to peer ever closer to the dreamscape it unfolds, where the moon hovers not a foot above the viewer’s head and an ethereal, diffuse light shimmers from within.

“I work in groups of paintings that inform one another. A group could start with a particular interest—something I read, saw or somewhere I visited,” Otto-Knapp explained in a 2013 interview with the Norwegian art journal Kunstkritikk.

“I use washes and layers that are frequently applied and removed. This process of removal creates negative shapes and spaces that I can build up until a tension is reached between the motif and the picture plane,” she added.

And ask not for whom In the waiting room waits; it waits for thee, at least until March 29.