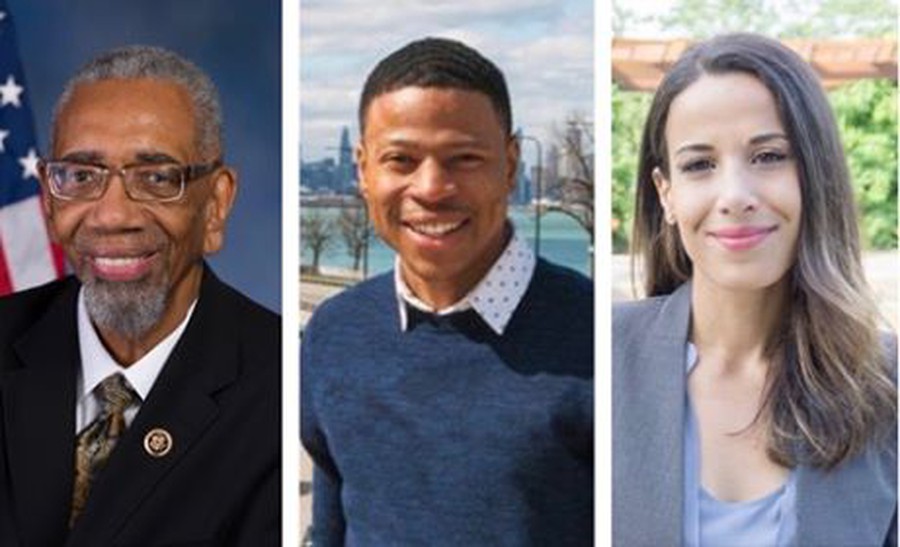 Indivisible Chicago–South Side, a political advocacy organization, hosted a forum featuring three of the four candidates running for the Democratic nomination in the election for Illinois’s first congressional district at the First Unitarian Church of Chicago on Thursday, January 23.

The forum was moderated by Esther Peters, associate director of UChicago’s Center for East European and Russian/Eurasian Studies, and featured incumbent representative Bobby Rush, as well as challengers Robert Emmons, Jr., and Sarah Gad. The fourth candidate, Ameena Matthews, had planned to attend, but could not due to illness.

Rush, 73, has served as the representative for Illinois’s first congressional district since 1993. Prior to being elected to the House, Rush served as alderman for Chicago’s Second Ward between 1983 and 1993, and also served in the U.S. Army from 1963 to 1968. In 1999, Rush ran for Mayor of Chicago, but lost to Richard M. Daley.

At the forum, Gad criticized Rush for his voting record, saying, “We do not have representation in D.C.”

Between 2007 and 2015, Rush missed 22.4 percent of House votes, the highest rate of any House member during that period. However, according to a ProPublica study, a majority of his absences for which an explanation was found were due to health issues affecting Rush and his wife.

In his rebuttal to Gad, Rush mentioned his 2008 battle with cancer, saying, “I was fighting for my life.” He went on, “If my wife is ill and needs me by her side, this is where I’m going to be.”

Gad, 32, is a student at the University of Chicago Law School. During her third year of medical school, Gad suffered severe injuries in a car accident, which led to opioid addiction and, eventually, a stint of incarceration for drug-related offenses.

“Seven years ago, I was languishing in a jail cell at Cook County Jail,” said Gad at the forum. “I was beaten, raped, and stabbed.”

At the forum, Gad criticized drug enforcement in the United States. “We have waged war on human life through this drug war…yet we keep fighting it,” she said, and suggested that a greater emphasis should be placed on education about addiction.

Emmons, 27, is a graduate of the University of Illinois at Urbana–Champaign (UIUC). After graduating, Emmons worked for OneGoal, a nonprofit organization that aims to increase the opportunity for underprivileged youth to obtain higher education. He has also served as a community leader at the Obama Foundation, helping other activists design projects and initiatives.

Emmons described his own experience with gun violence, saying that his former college roommate experienced poverty after being expelled from UIUC and was killed shortly after moving back to Chicago.

“Statistically, this was predictable,” he said.

All three candidates were asked what they would do to reduce the rate of gun violence. Emmons said gun violence prevention is his number-one concern, and suggested repealing the 1996 Dickey Amendment, which restricts the Centers for Disease Control and Prevention (CDC) from using funds to promote gun control. Until 2018, this law indirectly prevented the CDC from doing research related to gun violence.

Gad suggested that providing greater career-advancement opportunities for people who were formerly incarcerated would reduce repeat offenses and violence. In particular, she suggested allowing inmates to become eligible for Pell Grants, which provide basic financial support for undergraduate education.

The 1992 Higher Education Act prohibits Pell Grants for people on death row or serving life sentences, and the 1994 Violent Crime Control and Law Enforcement Act extended this eligibility to all inmates.

When asked, all three candidates said they would support reinstating Pell Grants for incarcerated persons.

“There is an intimate relationship between gun violence and lack of opportunity,” Gad said.

Rush described gun violence as “a public health issue,” and said that, in October of last year, he held a Chicago hearing on gun violence with several other representatives from Illinois.

The candidates were later asked about their stances on several issues which have been pushed by the left wing of the Democratic Party, including universal basic income (UBI) and reparations for descendants of former slaves.

All three candidates at the forum supported reparations. “It’s the only way to rectify not only slavery and Jim Crow, but also modern slavery and the new Jim Crow,” Gad said.

Rush and Gad both expressed support for UBI. Emmons said, “I support UBI in spirit, but one of the major cons is that it will take away social services from poor folks,” mentioning in particular that it may make it more difficult to enact reparations, as it could take away from funds that would be used for reparations.

Matthews, who was not present, is a community activist who focuses on violence prevention.

The Democratic primary election will take place on March 17, while the general election is on November 3. Several of the candidates have already received endorsements: Rush from the Planned Parenthood Action Fund, and Emmons from the Sunrise Movement, a youth-led political movement focused on environmentalism and climate change.