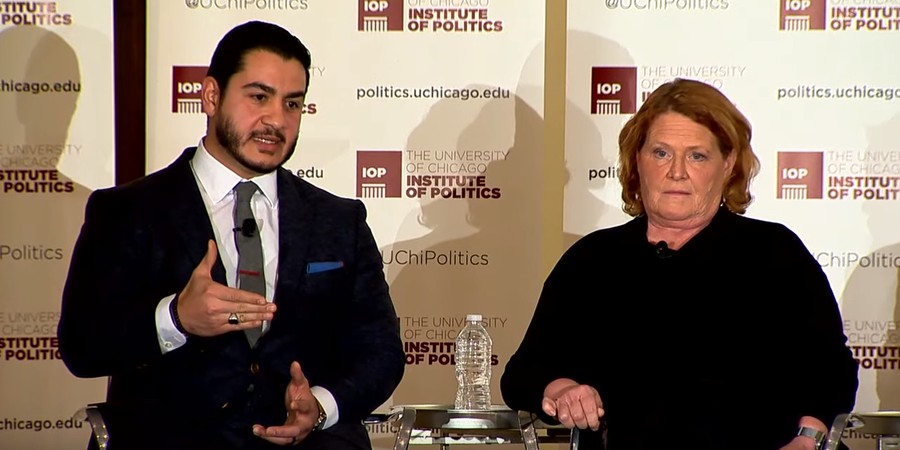 IOP Fellow and former director of the Detroit Health Department Abdul El-Sayed, left, and former North Dakota senator Heidi Heitkamp discussed the current rift between factions of the Democratic party at an IOP event on January 21.

On January 21, The University of Chicago Institute of Politics (IOP) hosted an event, titled Democrats: Whose Party Is It Anyway?, which explored the current rift between factions of the Democratic party. Student IOP representative Madison Irene introduced the event, and described this divide as two politically influential individuals politely going head-to-head.

While Heitkamp said electability is of prime importance, El-Sayed had a problem with the term because it has failed to predict actual electoral outcomes. He gave the example of Hillary Clinton, who was considered highly electable given the offices she had held over her career, but lost the 2008 Democratic primary and the 2016 presidential election. He also said that Barack Obama was not considered electable by mainstream commentators in 2008 and 2012 because he was a black man, but that he still won the presidency and his re-election bid.

When asked about her opinion on Vermont Senator Bernie Sanders (A.B. ’64), Heitkamp said that Sanders worked very hard on the Veterans’ Access to Care through Choice, Accountability, and Transparency Act of 2014 and cares deeply about veterans, but he simply let Trump take all the credit. Additionally, she said that the prospect of a “free college education is not a winning strategy,” in reference to Sanders’s plans to cancel student debt and make public colleges and universities tuition-free.

Heitkamp stressed that the reasons voters do not believe in politics anymore is because they are “promised the sun, stars, and moon,” and it never happens. “We got to make it happen,” countered El-Sayed regarding voter disillusionment.

Heitkamp said that a more moderate message will stand a better chance of defeating Trump: “Donald Trump would like nothing more than to run against someone who can be labelled as a socialist.” He believes that the candidate with the best chance to defeat Trump is former vice president Joe Biden, who is widely considered to be a moderate in the race.

El-Sayed disagreed, saying that “a moderate will not win against Trump.” He believes that voters will focus on “who will bring change” and “embrace an agenda that will deliver for people.” Referring to the charge that Sanders might be attacked for identifying as a socialist he said, “I think we cannot hold ourselves hostage to what people will say about us.”

“The reason we still have the Affordable Care Act is because I was able to get elected in North Dakota,” Heitkamp said. “My point is you need to learn how to win elections. Let’s get the politics right, and then we can take care of the policies later.”