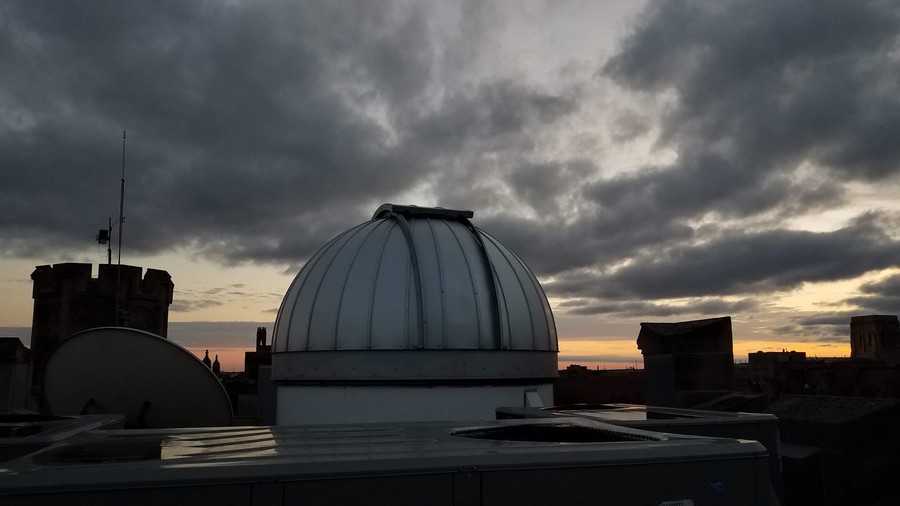 The Dome on the roof of Ryerson Laboratory.

Scientists from the University of Chicago and the Field Museum have recently discovered the oldest solid material on Earth: 7.5-billion-year-old stardust.

The discovery was made after extracting the stardust from a meteorite that fell in the Australian town of Murchison in 1969.

“This is one of the most exciting studies I’ve worked on,” Philipp Heck told CNN. Heck is a part-time associate professor of geophysical sciences at the University of Chicago, curator at the Field Museum, and lead author of a paper describing the findings, which was published on January 13 in the Proceedings of the National Academy of Sciences. Besides the 4.5-billion-year-old grain of dust, most of the grains extracted from the study are between 4.6 and 4.9 billion years old, which means most of the grains were trapped in the meteorite before the formation of the sun (which is about 4.6 billion years old). Hence, these grains are also known as “presolar” grains. “These are the oldest solid materials ever found, and they tell us about how stars formed in our galaxy.”

Normally, finding these presolar meteorites are extremely rare. Only five percent of meteorites fallen on earth contain them. Fortunately, the Field Museum owns the largest portion of this meteorite.

To extract the grains, the scientists crushed meteorite fragments with water, resulting in a paste that UChicago graduate student and paper coauthor Jennika Greer described smelled like “rotten peanut butter” during an interview with The Maroon. She attributed the smell to the large concentration of carbon inside the Murchison meteorite.

The rotten peanut butter–smelling paste was then dissolved with acid until only the star dust grains remained. The grains are extremely small; 100 copies of the largest presolar grains extracted would fit in a period at the end of this sentence.

Scientists calculated the age of each grain they extracted by measuring the amount of gas the grain contained due to cosmic ray exposure. “So the way that it works is there’s the grain floating in space,” she said. “There’s some cosmic ray that hits it… and will actually split the [silicon] atom.”

These elements of gas that are subsequently produced from the split atom are typically neon or helium and become trapped in the grain. To measure these gases, scientists place the presolar grains on gold foil through a device called a micromanipulator. The grains are then melted by a laser, and the trapped gases are subsequently released; the gases’ volumes are then measured to approximate the grain’s age.

Presolar grains can come in multiple chemical forms. In this study, the presolar grains extracted are also known as silicon carbide, a compound made up of silicon and carbon. The compound naturally appears on Earth in extremely rare amounts.

A star, however, can create silicon carbide in one of two ways: either towards the end of its lifespan, during a phase scientifically known as the red giant phase, or post death, after a star explodes during a supernova. By analyzing the ratio of isotope Silicon-30 to Silicon-28 present in the grain, they determined that the 7.5-billion-year-old presolar grain was created during a star’s red giant phase.

Greer emphasized that although the 7.5-billion-year-old grain is the oldest solid material on Earth, it is only one data point about the broad history of star formation in the Milky Way.

“We have models, but it’s good to have physical data to back up those models… just because you can say something about the grain’s origins doesn’t necessarily tell you about its full environment,” Greer said. “If we get more data points, we'll actually be able to start disentangling that information.”

Through the collection of multiple presolar grains, scientists have been able to confirm that stars do not form at a constant rate. “Our hypothesis is that the majority of those grains, which are 4.9 to 4.6 billion years old, formed in an episode of enhanced star formation. There was a time before the start of the solar system when more stars formed than normal,” Heck said to CNN.

In addition, scientists also learned through the study that the presolar grains typically clumped together into large granola-like clusters while floating through space. “When we think about interstellar dust… we are typically looking at dust particles that are 0.1 microns in size. It’s not that there haven't been observations of larger particles, it’s just not in the pictures we hold in our head when we think about this,” Greer said. “With our evidence for larger dust particles, we are closer to a more comprehensive picture of dust in the galaxy.”

Currently, the scientists are still analyzing more solar grains from Murchison. Greer expects that she and her colleagues will have about 50 to 100 large presolar grains by the end of their study.

The analysis of solar grains does not stop with Murchison. Their next extraction will be from another meteorite, called Agua Zarcas, which fell in Costa Rica in 2019. Greer describes this meteorite as having a more pleasant smell: vanilla.