"Fearful of challenge and discomfort": Top Administrators Cut Back Dialogue with Students

Student body presidents from the past six years have told The Maroon that their meetings with administrators are choreographed affairs with little opportunity for real dialogue.

Student Government (SG) president Jahne Brown and her slate prepared for weeks for a rare meeting with President Robert Zimmer in November.

The hour-long meeting began with a half-hour conversation between Zimmer and Deputy Provost Bala Srinivasan on the importance of emerging fields in data science and engineering. SG’s leadership had prepared for a meeting on political issues like campus sustainability, mental health, and sexual misconduct. When it was their turn to speak, Brown said, Zimmer listened attentively but spoke very little.

“The one thing he asked about—and seemed really, genuinely interested in—was when we said there’s so little trust of the offices and admin,” Brown, a fourth-year student, told The Maroon. “We suggested doing one quarterly office hours, like a lot of other universities, or maybe just coming to sit in on a house meeting.’”

Zimmer did not make any promises as they talked, and Brown was surprised he would not even make a general commitment to more dialogue, she said. As the meeting came to a close, she asked whether Zimmer would do anything going forward, based on their conversation.

“He literally said, verbatim, ‘I’m not going to do anything.’”

Student Government’s dialogue with the central administration hasn’t always been so terse. But recently, the students elected to serve as intermediaries between administrators and the student body have been shut out from substantive dialogue with administrators, recent interviews with members of the past six years of SG executive slates show.

“That whole exchange was just so frustrating. It’s really our only time to talk about all these things,” Brown said. “It just seemed so dismissive.”

“These values of open discourse...testing your ideas in public—it wasn’t happening.”

The previous provost Eric Isaacs, who served from 2014 to 2016, held an open forum twice a year at SG assemblies—until a contentious meeting in May 2016 made administrators more wary of public events with the provost.

Tyler Kissinger (A.B. ’16) was SG president for two consecutive years, from 2014 to 2016, and presided over the meeting that made the Office of the Provost sour on attending future events.

Kissinger told The Maroon in a recent interview that members of Teamsters Local 743, a union including clerical and maintenance workers on campus, arrived to the meeting and questioned the provost about the health-care plan on their new dining contract.

Other students pressed Isaacs for answers to questions on issues like a South Side trauma center and campus sexual assault.

After the meeting, Dean of Students Michele Rasmussen emailed Kissinger, requesting to meet and discuss “how SG leadership engages with administrators.” 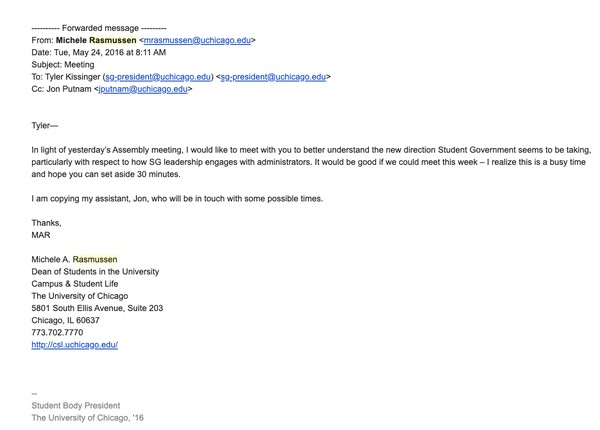 In a Facebook post at the time, Kissinger said that in the meeting with Rasmussen, he was told “that she was ‘disappointed’ in me for not ‘controlling’ an SG meeting in which the Provost came to speak with members of the student body…. Apparently, I should have stepped in and made students ‘move on.’”

“I was told that my lack of intervention this time, as well as ‘tactics’ of students at this meeting (such as requesting a yes or no answer to basic questions and reading questions that ‘had clearly been prepared in advance’) were inconsistent with this UChicago’s method of free inquiry,” Kissinger went on.

The consequences of this, Kissinger said in the post, affected SG’s ability to help students voice their thoughts to the administration: “The clear threat is that students, via their Student Government, will no longer have access to University administrators.”

Soon after the incident, Isaacs was succeeded as provost by Daniel Diermeier, who put a stop to the SG open forum.

Brown, the current president, said she asked Rasmussen why that meeting—one of students’ only points of contact with the provost—had ended.

“She said people were really aggressive, and that’s why we don’t do them anymore,” Brown told The Maroon.

Rasmussen did not respond to The Maroon's request for comment on this article. (Update below)

Recalling the incident recently, Kissinger told The Maroon, “All of these values that the University of Chicago markets itself as embodying were in no way lived out by the people in positions of power, running the University.”

Kissinger’s successor, Eric Holmberg (A.B. ’18), echoed Kissinger’s sentiments in a 2016 statement to The Maroon. “Of anyone else on campus, the administration is far more fearful of challenge and discomfort than any student I know,” Holmberg said, in response to a letter the College dean of students sent to incoming first-years condemning trigger warnings and intellectual safe spaces.

“It’s ironic that during my time at the University of Chicago,” Holmberg said, “administrators have continuously sought to create a comfortable space for themselves free of challenge by avoiding engagement with student leaders.”

Since Kissinger’s term, the University has stopped making its president available for quarterly meetings with SG. Zimmer now meets with the student body president once at the beginning of his or her term, and once at the end.

A public forum with Zimmer

Chase Harrison (A.B. ’18), vice president of SG from 2017 to 2018, made it a personal mission to secure a public forum with Zimmer for undergraduates during his time in student government.

Harrison said that an interview with Zimmer in The Wall Street Journal, in which the president commented that it would be acceptable for white nationalist Richard Spencer to come to campus, prompted him to request a public meeting.

Harrison authored a resolution, which was passed by College Council, asking for a forum with Zimmer in February 2017.

It took until 2018 for the forum to take place. “I just kept bothering Michele and she was able to secure him,” Harrison said. “It got postponed many times,” he said, but Rasmussen finally confirmed a time.

At the time, it was the first public event with undergraduates Zimmer had held in five years—a fact SG highlighted in their advertisement of the event.

Student Government advertisement for a meeting with President Robert Zimmer.

Outside the talk, graduate students protested over unionization. They also expressed frustration that the event had been marked as undergraduate-only.

“It’s like everyone is eager to meet with Zimmer because he’s so evasive,” Harrison said.

Harrison told The Maroon that after the event, he drafted an opinion piece about Zimmer’s refusal to answer some questions at the forum. But in the end, he said, “I decided to pull it from The Maroon because I worried it would anger him and ensure another event never occurred.”

“He was talking about building a supercomputer. I’m like, I’m trying to put some free tampons in the library.”

Recent leaders of Student Government say that the rare meetings with the University president were highly choreographed, and the president avoided substantive dialogue.

Fourth-year Sat Gupta, the president of SG in the 2018–19 academic year, told The Maroon that at the first meeting he ever attended with Zimmer, he was thrilled to be given an audience with the president.

“As a first-year, you feel kind of like, ‘Wow, I’m being led into Levi Hall,’” Gupta said. “I’m all dressed in a suit, and I have a notebook, taking notes, really just trying to be an active participant in the meeting.”

“But what I quickly realized was that this wasn’t so much a meeting as a lecture.”

The administration set the agenda, and scheduled most of the meeting for a discussion of issues that had little bearing on Gupta’s work, he said. Zimmer spent much of the meeting talking about the relationship of the University’s technology development to geopolitics.

“He was talking about building a supercomputer,” Gupta said. “I’m like, I’m trying to put some free tampons in the library.”

“After that meeting, I never brought a notebook again to a Zimmer meeting.”

Like Gupta, Kissinger joined SG his first year of college, and was part of meetings with Zimmer throughout his college career, beginning spring quarter of his first year.

“He would always pass the buck on whatever question—try to defer to someone else in the room,” Kissinger said.

At the time, he wanted the University to acknowledge that it was the only institution in the local area capable of opening a Level 1 trauma center.

“What was most frustrating about it was we wouldn’t even get him engaged in a discussion about the merits of that idea—it would just be non-sequiturs, like, ‘We view health care access as the most important issue on the South Side of Chicago.’”

Brown and her slate recalled similar experiences in their November meeting with Zimmer.

The University president “lectured us about science and molecular engineering and some math/science concepts that didn’t seem to have any relevance to the topic and felt more appropriate for a classroom,” the executive slate wrote in published notes of the meeting.

Beyond private conversations in Levi Hall, administrators have also attempted to exert control over the communication SG has with the student body.

Brown’s Student Government administration planned to send an email to the entire student body—a listhost to which they don’t have direct access, but which they have traditionally been permitted to use by sending communications to administrators for review.

The first email that the newly elected Student Government slate wanted to send out sat for eight weeks before reaching students’ inboxes.

Brown said her slate stayed up late on the first day of fall quarter to finish the email, which they wanted to use to welcome students back and introduce applications for SG positions that would be due in two weeks.

But administrators said they wanted to vet the email, and weeks went by, during which the application deadline passed.

On Monday of fifth week, they received an email asking them to include language that would refer to the Halloween safety email and remind students to sign up for safety alerts.

“It is frustrating that administrators expect us to just sort of be a mouthpiece for them, but when we’re critical, they make it very difficult for us to get out any sort of message,” Brown said.

“At this point, we’re going to have to change the email anyways, because the deadline for all our positions are closed,” Brown added, “but we’re afraid to rewrite the email because then the process has to start from the very beginning.”

The email continued to be delayed, she said. “This happens every week until seventh week.”

Then, at a meeting seventh week, they learned that what had caused the email’s delay: the mention that SG wanted to work with student groups to start a free food pantry for students.

The Office of the Provost was looking into setting up a food pantry, they were told. “So basically, because it’s their thing—which we didn’t even know about—we couldn’t say it,” Brown said.

The slate then conceded, taking out the mention of the pantry. Brown eventually wrote a brand new email, she said, after having “completely watered it down.”

“They’re trying so hard to control our message.”

In response to The Maroon's request for comment to Michele Rasmussen, University spokesperson Jeremy Manier provided the following statement on Rasmussen's behalf.

“For as long as we have been in our respective roles, Michael Hayes (Assistant Vice President for Student Life) and I have always been willing to make ourselves available to SG and Grad Council members via email and in-person meetings and we have enjoyed many productive conversations as a result.”