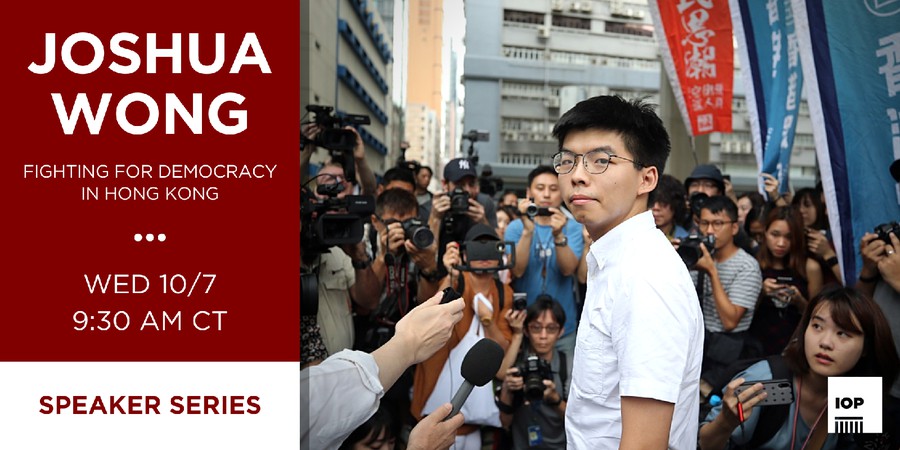 Joshua Wong, a Hong Kongese democracy activist and 2017 Nobel Peace Prize Nominee, spoke to the Institute of Politics (IOP) on Wednesday about his experience working on pro-democracy campaigns in Hong Kong. The talk was moderated by James Bennet, former editor-in-chief of The Atlantic and former editorial page editor of The New York Times.

At age 14, Joshua Wong began to advocate for Hong Kong’s democratic autonomy when the Hong Kong government planned to introduce the Moral and National Education Curriculum (MNE) in 2012.

Wong and other activists viewed the MNE as a hijacking of education in Hong Kong by the People’s Republic of China (PRC) and a breach of the “one country, two-systems” principle formulated with the United Kingdom over the return of Hong Kong. He founded Scholarism, a student activist group, in 2011, going on to emerge as a major figure in the Umbrella Movement in 2014 and then co-founded and co-led Demosistō, a political party. Both, Scholarism and Demosistō, have been dissolved due to increasing risks of involvement in political activism in both Mainland China and Hong Kong.

Bennet opened the conversation by asking about Wong’s most recent arrest, which occurred just last month. He was charged for both unauthorized assembly and wearing a mask at a demonstration at a time that violated the 2019 anti-mask law despite the fact that people around the globe were encouraged to wear a mask. Wong also said that in a worst-case scenario he could face a six-year prison charge for the assembly and one-year for wearing a mask.

When asked by a student how the current COVID-19 pandemic was affecting his movement, Wong said that he has been able to continue his work online, through platforms such as Facebook Live and YouTube. Wong said that even the Nintendo Switch game Animal Crossing has been used to get “protestors in [the Animal Crossing] islands to show our slogans” and as “a way to keep momentum.”

For Wong, the handling of the pandemic by the PRC has highlighted China’s lack of both transparency and checks and balances. This is reflected in the Party's behavior toward both whistleblowers and the global community, Wong says that this is particularly evident in the government’s ignorance toward “the damage of the pandemic to the rest of the world.”

Despite efforts to continue activism online, Wong was frustrated with the Hong Kong authorities’ reluctance to allow activists to return to the streets despite the rapid drop in coronavirus cases in the past two months. Wong believes that the “governments have used [the virus] as an excuse to stop our protests.”

When questioned about what the U.S. has done and what it should do to support the people of Hong Kong, Wong stressed that supporting Hong Kong is not “a matter of left or right but a matter of right or wrong” and that bipartisan support is crucial in the future regardless of the result of the upcoming election.

UChicago professor Johanna Ransmeier asked Wong about the belief that the movement was predominantly driven by the youth. He explained that since last summer, more than 20 percent of the population took to the streets. Wong said that in the protests from last year, the age of those arrested ranged from 11 to 84 years old, emphasizing the cross-generational importance of the movement.

Wong’s descriptions of police brutality included protesting high school students under fire of live rounds, the sexual assault of a young woman by riot police during protests, incidents of pregnant women being pushed down in metro stations, and arbitrary arrests of the elderly.

Wong stated that “coming out to vote shows that you care about the future of your country” even if you don’t support any candidates on the ballot. Bennet described Wong’s sacrifices of his commitment to democracy as “humbling” particularly in a country where many take the right to vote for granted.

Wong finished the talk with a plea to “encourage people of the world to fight against the autocratic Chinese regime.”